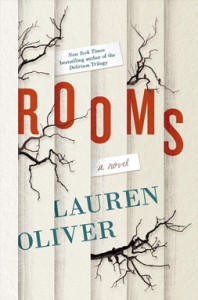 Rooms by Lauren Oliver, is a chilling mix of a ghost story, gothic, and paranormal, with ghosts who cannot leave the house, and an estranged family story in which the ex-husband dies, leaving his alcoholic ex-wife, angry daughter and teen son to clean out their former home, not knowing that it's haunted.

A house full of rooms, characters, ghosts, and unresolved issues. Upon Richard Walker’s death, his scattered family returns to clear out his house, which they hope to inherit. His ex-wife, Caroline, soothes bad marital memories with alcohol. His grown daughter, Minna, brings along her own six-year-old daughter, Amy, and a deep-seated resentment of her father, while his suicidal son, Trenton, struggles with teenage angst in the aftermath of a debilitating car accident.

Trenton first senses the haunting presence of others in the home. The spirits of Alice and Sandra, two women who lived in the house at different times, now find themselves confined there together, squabbling with each other as they watch the family cope with Richard’s messy legacy.

Soon a new female spirit close to Trenton’s age enters the house, and Alice conceives a dangerous plan to free herself of its prison. Some wacko crazy dead and living character, all tripped in the past wanting to escape. The living and dead are haunted by painful truths, mystery, mistakes, sadness, buried secrets, pain, and regret for a haunting tale.

Again, I listened to the audiobook narrated by Orlagh Cassidy, Barbara Caruso, Elizabeth Evans, Noah Galvin, Cynthia Darlow (so I did enjoy the different voices and had a few favorites with a full 9 hrs and 20 min length).

After a while they became a little annoying, and slow, so was not fully engaged, as I currently have too many “A” books to read (new releases and ARCs); however, while driving or doing other work, I like audiobooks (my “B” list). So not a lot to choose from when you have read most of the new releases in advance, so trying to expand my reading.

If you enjoy this type of genre, sure her YA fans will love. Myself – not so much. This was my first book by Oliver, so will give her other books a try, as have heard great things about the author's work, as a talented writer. (I need to like the characters).