The Skeletons in God's Closet 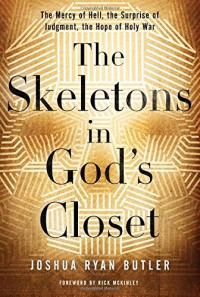 The Mercy of Hell, the Surprise of Judgment, the Hope of Holy War

A special thank you to Thomas Nelson--W Publishing and NetGalley for an ARC in exchange for an honest review.

The Skeletons in God’s Closet, The Mercy of Hell, the Surprise of Judgment, the Hope of Holy War is an insightful and thought-provoking book, packed with tough questions, fresh ideas with profound and enlightening perspectives to age old thinking about heaven, earth, and hell, written by talented, Joshua Ryan Butler.

Wow, this is one powerful and eye-opening book; one you cannot rush through or skip around. Since this is an ARC, I definitely want to purchase a copy for reference, to refer to often, as I found myself bookmarking something on almost every page. There is so much here to grasp, with extensive research and references to scriptures, with profound meaning. Set aside some time. The closet is heavy. Opening the door is intimidating. Our culture is asking questions, and many of our answers are within the pages of this well-written book.

God seems to want to keep the closet door open. God keeps flinging it wide open and inviting us to look inside as much as we may keep trying to shut it. We think God has some skeletons in the closet. At least, that’s what many of us fear. God’s skeletons are those deep, dark doctrines we’d rather avoid. Hell. Judgement. Holy war. Those parts of God’s story that, if we really took a close look at, we’re afraid would radically change the way we feel about Him.

In the meantime, our faith grow lukewarm and stale as we go through the motions of church services and verbal assent, while our hearts stay distant and unengaged. Regardless, God’s closet door doesn’t seem to stay shut.

The tough topics explored in THE SKELTONS IN GOD’S CLOSET are powerfully and profoundly relevant to life in our contemporary culture. These are not just pieces of the Christian faith we can learn to live with; they are profound plotlines in the story of the whole we literally cannot live without.

GOD IS GOOD! This is the central message and driving theme of the book. Not just sometimes good, but extravagantly, mercifully, gloriously, better than we can ask or imagine good. All the time!

As Butler points out, not only does God NOT have skeletons, God himself is good in his very bones; not just in what he does, but in who he is, not only in his actions but in the architecture of his character, the beauty of his being, the depths of his divine affection for the world.

Heaven’s primary counterpart in the gospel story is not hell; it is earth. Heaven and earth are threaded throughout the Biblical drama of creation, rebellion, and redemption.

Heaven and earth are the setting, the context, the stage, in which the ensuring drama of human history is about to unfold. It is not absent from the world, waiting to make its entrance only at the end of history. Heaven is a part of God’s creation here and now.

Heaven and earth-not heaven and hell-are counterparts, created with and for each other, and bound together in inseparable relationship. Hell is not part of God’s creation. Hell does not show up until later. Sin, death, and hell, when they do enter the story, are presented not as good things, created by God, but rather as invasive intruders into God’s good world.

GOD Is on a mission to get the hell out of earth! This is where the author breaks down the each story and meanings are remarkably different.

In the first story, the problematic one, this phrase means that God is on a mission to abandon the earth, to “get the hell out of Dodge,” and take a bunch of us with him. In the construal, Jesus and his followers are on a mission to escape the world, to make a break for our heavenly home and leave this mess behind. Unfortunately, Christianity has at times-especially in recent times-framed things this way and in doing so, horribly distorted the gospel story. The phrase also can be taken a second way.

In the second story, told-the biblical one, it can be taken to mean that God cares deeply for his world, that the Creator loves his creation, that our heavenly Father has dramatic compassion for the humanity he has brought up from the dust. In the second story, it means that God is grieved by the sin, death, and power of hell that afflicts the world, and he is sacrificially involved in the removal of all that destroys and alienates his world from himself.

A different take when God’s agenda is to get the hell out of earth (meaning reconciling Heaven and earth). What do they need to be reconciled from? From the divisive and destructive powers that have caused the problem in the first place.

In the gospel story, heaven and earth are currently torn by sin. Our world is being ravaged by the destructive power of hell. God is not the one who unleashes hell’s destruction, we are. In the Biblical story, we are the author’s of hell’s fury. God does not create the power of hell; we do. God does not rape kids and murder his neighbors; we do. God is not the one with skeletons in his closet; we are.

The Game Changer: So what happened between the Old and new Testaments to change all this? What was the catalyst that moved hell’s location from underground to outside the city? What was the game changer that shifted our fate from an unconscious death to being raised in life?

The answer: the resurrection of Christ. All will be raised!

God does not ask us, “Are you good enough to get into my kingdom?” He asks us instead, “Will you let me heal you?” this is the radical message at the center of the gospel of grace; not our works but his grace, not our behavior but his mercy. He wants to heal us. The question is whether we will let him, whether we will receive his healing.

Highly recommend to anyone of any religion or culture, wanting to learn more!

Josh Butler serves as pastor of local and global outreach at Imago Dei Community, a church in the heart of Portland, Oregon. Josh oversees the church’s city ministries in areas like foster care, human trafficking and homelessness; and develops international partnerships in areas like clean water, HIV-support and church planting. Josh is also a worship leader who enjoys writing music for the life of the church.