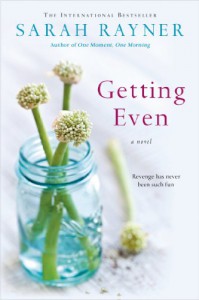 A special thank you to St. Martin's Griffin and NetGalley for an ARC in exchange for an honest review.

GETTING EVEN by Sarah Rayner— a yummy chick-lit, where revenge has never been so wickedly delicious and scandalous! You will need a keep a score card to keep up with who is outsmarting, backstabbing, (or sleeping) with whom.

Things are brewing at the London Ad agency and if you have ever been involved in office politics, the volume is turned up full blast. Orianna and Ivy are longtime coworkers, where Orianna is quietly dating her superior, Dan. Ivy is having an extramarital affair with the firm's financial director, Russell. Dan and Ivy's personal trainer, Rob, has a crush on Dan. There are also many other secondary characters to spice up the sexy action, plotting, and drama, as well. (Rob, Cassie, Ursula, Leon, Chloe, and more.)

Ok, Ivy is jealous of Orianna, since she got a promotion among other things, Ivy sets out to get revenge on Orianna, getting a number of other people involved in her little scheme. However, Ivy has some secrets in her closet (no punt intended), which may come back to bite her.

Getting Even gives new meaning to the phrase, “Oh what a tangled web we weave, when first we practice to deceive!” A yummy, sexy, clever, and intriguing chick-lit, keeping you laughing until the delicious ending, where everyone has some tricks up their sleeves, and cards yet to be played! (loved the banter of emails at the end).

If you have not read Sarah Rayner, highly recommend, as she has a way of developing characters -- so bloody delicious and entertaining! She can make you cry and laugh. I became a fan after reading, The Other Half and One Moment, One Morning, and look forward to reading the other ones I missed along the way, and more to come!

Fans of Emily Giffin, Jennifer Weiner, and Emily Liebert will appreciate the London’s gal sense of female humor; with devious revenge, jealousy, backstabbing, and a little bonding. Keep your friends close and your enemies closer (at least no dead bodies here). Hey, if you don't have enemies, it's because no one thinks you're significant enough to worry about.

Read it, to get some pointers on your next office revenge!