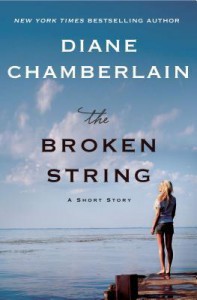 Diane Chamberlain’s intriguing THE BROKEN STRING, an e-short story novella and prequel to her exciting drama of family secrets in her upcoming book, THE SILENT SISTER. (Oct).

As seventeen year old Riley MacPherson travels by plane alone, to visit her older brother, Danny who has suffered injuries in Iraq, she flashes back with fond memories of her childhood, a time when her brother had always been there for her to protect her from life’s messiness.

Her mom, sad and haunted and a distant and obsessed dad, with collections and things, leaving two children without a warm and caring family atmosphere, due to a suicide tragedy by their child prodigy and famous violinist, daughter, Lisa, when she was seventeen. No one talks about her where secrets are dark and silent.

Riley has no recollection of her older sister as she was only a baby. She recalls a time, when she was just a little girl, when she longed for her mom's smile, trying desperately to share in the happy place where memories were pure and happy, but she lacked the key to the final door and had no clue where to look. An old photograph with the girl and the violin, her mom looked happy.

Riley always looked up to her older brother, who was always there to protect her, and she thought that his strength and confidence was a good thing. However, she has no idea it is the beginning of a defiance that would later rule him.

Her memories are a long string of events that bound her brother to her. Somehow though, that string had been broken –the anger that had been a part of him took over, finally pushing her away, as well as their parents. She longs to be there for him, as he had been for her when they were children.

Fortunately, I had the opportunity of reading an ARC of THE SILENT SISTER (5 stars), by the publisher, and Diane once again delivers a riveting and suspense page turner. She skillfully crafts a complex family drama mystery, with multi-generational rich characters.

I wanted to go back and read the novella, rewinding to a time earlier to hear from Riley, before the setting of THE SILENT SISTER where we connect with Riley and Danny, years later after their parent’s death, when the secrets begin to unravel.

Highly recommend both THE BROKEN STRING and THE SILENT SISTER a moving story of a family tragedy, and the desperate attempt to pick up the pieces.