All Day and A Night 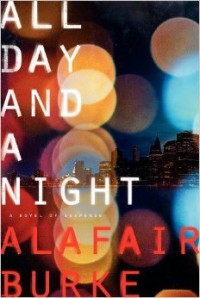 ALL DAY AND A NIGHT, an Ellie Hatcher Series #5, by Alafair Burke, opens with the shocking murder of psychotherapist Helen Brunswick, and complicates an old case, as NYPD detective Ellie Hatcher and attorney Carrie Blank both search for the truth from opposite sides of the law. The entire city suspects her estranged husband - until the District Attorney's office receives an anonymous letter.

Over a decade ago Anthony Amaro was tried and convicted for the murder of Donna Blank. She was the suspected fourth victim in a series of murders and the police were able to get a confession out of Amaro for her case.

The letter's author knows a chilling detail that police have kept secret. Her injuries were similar to the signature used 20 years earlier by Anthony Amaro, a serial killer serving a life sentence for his crimes. Now, Amaro is asking to be released from prison, arguing that he was wrongly convicted, and that the true killer is still on the loose. Has suspected serial killer Anthony Amaro spent 18 years in New York’s Five Points Correctional Facility for a murder he didn’t commit?

Meanwhile Amaro has a top-notch defense attorney on his side as well as Donna Blank's sister. Carrie wants her sister's killer to pay for his crimes and knows that joining Amaro's team will allow her full access to the case files.

NYPD Detectives Ellie Hatcher and J. J. Rogan are tapped as the "fresh look" team to reassess the original investigation that led to Amaro's conviction. They are asked by her District Attorney boyfriend, Max Donovan, to take a look at a long closed murder case. Hatcher and Rogan’s task is to take a fresh look at the case to see if anything was missed in the initial investigation. The case pits them against both their fellow officers and a hard-charging celebrity defense lawyer with a young associate Carrie.

As both the NYPD and Amaro's legal team search for certainty in years of conflicting evidence, their investigations take them back to Carrie's hometown and secrets left behind there.

A psychological complex and multi-layered thriller, Burke’s ALL DAY AND A NIGHT raises larger questions about the choices we make, the mistakes we can’t undo. The author’s view of the criminal prosecution is skillfully designed with alternating perspectives of the detective and attorney. Fans of Lisa Gardner, Tess Gerritsen, Amanda Kyle Williams, and Karin Slaughter will enjoy the tough female police officer and complexities of the system.

The main reason for giving a lower rating was the audiobook. Andi Arndt, the narrator’s voice was annoying as she tried to use her voice range for the different characters and did not connect, It took away from the overall story, combined with the fact I have not read the previous books in the series, which may have impacted my thoughts.