I Love You More 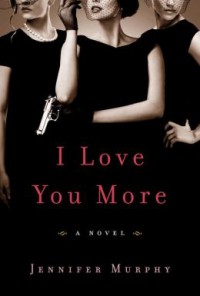 I LOVE YOU MORE by Jennifer Murphy, a debut novel, narrated by Dorothy Dillingham Blue (Picasso-outstanding), Johnathan McClain, Cassandra Campbell (always a winner), and Danny Campbell. Highly recommend the audiobook, which will keep you laughing and intrigued with this crazy cast of southern characters- a riot!

An engaging coming-of-age story, revolves around the murder of twisted and charismatic lawyer, Oliver Lane, at his beach house on North Carolina's Outer Banks. The victim had three wives starting with his first and legal wife, Diana, a true Southern belle, artistic, beautiful and gracious,and the mother of his word-obsessed smart 12-year-old daughter, Picasso.

The other wives: Jewels, an architect and the second wife, is athletic, angular and brusque; and cerebral bookstore manager Bert, the third wife, is nurturing and spiritual.

Told from multiple points of view, readers hear from before and after the murder, while readers get an inside view of the manipulative sociopath narcissist, and his chosen targets.

I enjoyed the multi-narrators with different voices, making for an entertaining read for a whodunit mystery. From Oliver/Peter, Jewels, Bert, Diana and detective Kyle Kennedy- a novel of conspiracy, lies, deceit, revenge, jealousy, and betrayal—a psychological thriller! (Nice front cover which draws you in)

Look forward to reading more from this author! Would like to hear more from Picasso and her adventures for a sequel.