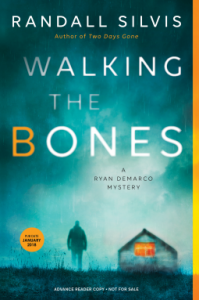 When long-buried secrets come back to the surface..

Ryan DeMarco returns following Two Days Gone landing on my Top Books of 2017 with a gripping follow-up from the acclaimed author, Randall Silvis — WALKING THE BONES.

The continuation of Ryan DeMarco leads Marco and his partner to an unsolved murder case of seven African American girls who went missing from 1998 and 2004. A story of things buried―memories, regrets, secrets, and bodies.

Dark hidden secrets are unraveled and exposed in this gripping psychological suspense crime mystery thriller (procedural) with a strong literary twist. The shocking conclusion will leave you gasping, with thoughts of Vladimir Nabokov’s classic Lolita.

“The past is never past, she thought. Every second of their pasts lay gathered inside them. Every incident of their pasts had constructed their present, every cell interlocking, layer upon layer. The past is omnipresent."

Picking up from Two Days Gone, Sergeant (49 yrs. old) Ryan DeMarco of the Pennsylvania State Police is still suffering from the loss of his best friend, Thomas Hutson, his son, Ryan Jr. and the demise of his marriage. Guilt-ridden, he continues to wrestle with his demons spending time at the cemetery.

They were all gone. Only Jayme remained. He hopes he will not ruin her life.

Currently, he is dating Jayme Matson (fellow Trooper), and she is quite concerned about his well-being. She has convinced Ryan to take a medical leave of absence for three months rather than retire. She decides to join him. They rent an RV and hit the road to visit her sick grandmother in Kentucky, her hometown.

However, when they arrive, they become involved in a murder mystery. Seven young females reduced to bone. Seven skeletons found in a four by fourteen by ten-foot space between the walls of a local church.

Each of the girls — are between fifteen to nineteen years of age. All light-skinned African American girls. Not a single Caucasian. Each cocooned in a clear plastic sheeting and sealed with silver duct tape. Each meticulously, obsessively cleaned and stripped.

Who was the killer? It had to be someone who knew about the false wall in the church and how to access it. A regular visitor, the pastor, or someone well-known in the community? Later the church was torched.

Flashing back and forth from Ryan’s childhood to the present –we learn more about his earlier childhood. The one which still haunts him.

Between Ryan’s internal struggle, his grief and guilt, emotions, insecurities, disturbing dreams, regrets, his troubled ex-wife Laraine, and his current relationship with Jayne – he has his hands full. The tensions and drama run high. Will he screw up his second chance at happiness?

“Unless you have chaos inside, you cannot give birth to a dancing star.”—Freidrich Nietzche

Neither Ryan nor Jayne knows where their relationship may be going, but they are along for the rocky ride. (Mixed with a few family members and locals). Plus we learn about both their pasts.

In the midst of their personal affairs, they are drawn into this old mystery.

From a senior amateur group of six concerned citizens (Da Vinci Cave Irregulars). Determined to solve this case and help in any way they can —to a registered pedophile, minister, Mennonite, a groundskeeper, a foreman, a tarot-car-reading librarian, a retired coroner, a reclusive chiropractor millionaire, among others.

Each of the victims had circumstances and were reported missing in the Kentucky, Tennessee, and Missouri. The all were between five feet and five four. Petite. The cause, date, time, and place of death were undetermined. Runaways. Had their families given up on them long before their bones ended up in Aberdeen?

In addition to Ryan’s haunted past, afraid he was becoming his father—now the seven girls are starting to haunt him as well. Will the cemetery, a bear cage, or being trapped in the woods give him the answers they are desperately seeking?

With rich, evocative language, a twisty plot, and well-developed characters, Silvis once again delivers an extraordinary piece of art. Not only is WALKING THE BONESa phenomenal suspense crime mystery, but it also possesses an intense character study. I loved Two Days Gone; however, the followup further delves into the heart and soul of DeMarco and his tormented childhood as well as adulthood.

Both parts of the story (Ryan’s) and the (murder mystery) are equally as gripping. The secret behind the girl’s death was unpredictable and a clever twist. Silvis lyrical prose is spellbinding. Beautifully written, and profoundly moving, an emotional and haunting meditation of acceptance, love, trust, and survival. (an intriguing character).

I enjoyed Jayme’s personality — a strong sassy and witty female counterpart to Ryan’s complicated, moody, emotional, deep, and grief-stricken side, at times. A delicate balance of humor. Enjoying Silvis’ writing and look forward to reading his backlist.

Highly Recommend both Two Days Gone and WALKING THE BONES. For fans of intelligent well-plotted literary mystery suspense thrillers. Looking forward to seeing what is coming next!

A special thank you to Sourcebooks and #NetGalley for an early reading copy.