Cleverly plotted, C. J. Tudor amps up the terror in her frightening, highly creative debut thriller— THE CHALK MAN. Revolving around Eddie Adams in 1986 with his four 12-year-old best mates in the picturesque English town of Anderbury.

A coming-of-age tragedy, weaving past and present, a haunting look at childhood friendships and secrets. When the past— will not stay buried.

The gang: Eddie Adams (nickname Eddie Munster from The Addams Family), Fat Gav, Metal Mickey (braces) Hoppo (David Hopkins), and Nicky. Nicky was the only girl. However, she was one of the guys.

Every kid wants to find a dead body. What could be more exciting? Right?

They wanted to find something bad that day. They did indeed.

The Chalk Man gave Eddie the idea for the drawings. He could leave secret messages for friends. However, it led them to something sinister. A body of a young girl.

Which came first?. The chalk men or the killing? A chalk man to lead the way. Just like before. Once again. Who is the Chalk Man?

More than thirty years ago and the past will not stay buried. Now Ed receives a letter. Two pieces of chalk and a drawing of a stick figure.

History begins to repeat itself. Ed soon realizes the game was never over.

The message is apparent. A stick figure with a noose around its neck.

“Karma. What you sow, you reap. You do bad things, and they’ll come back eventually and bite you on the backside.” 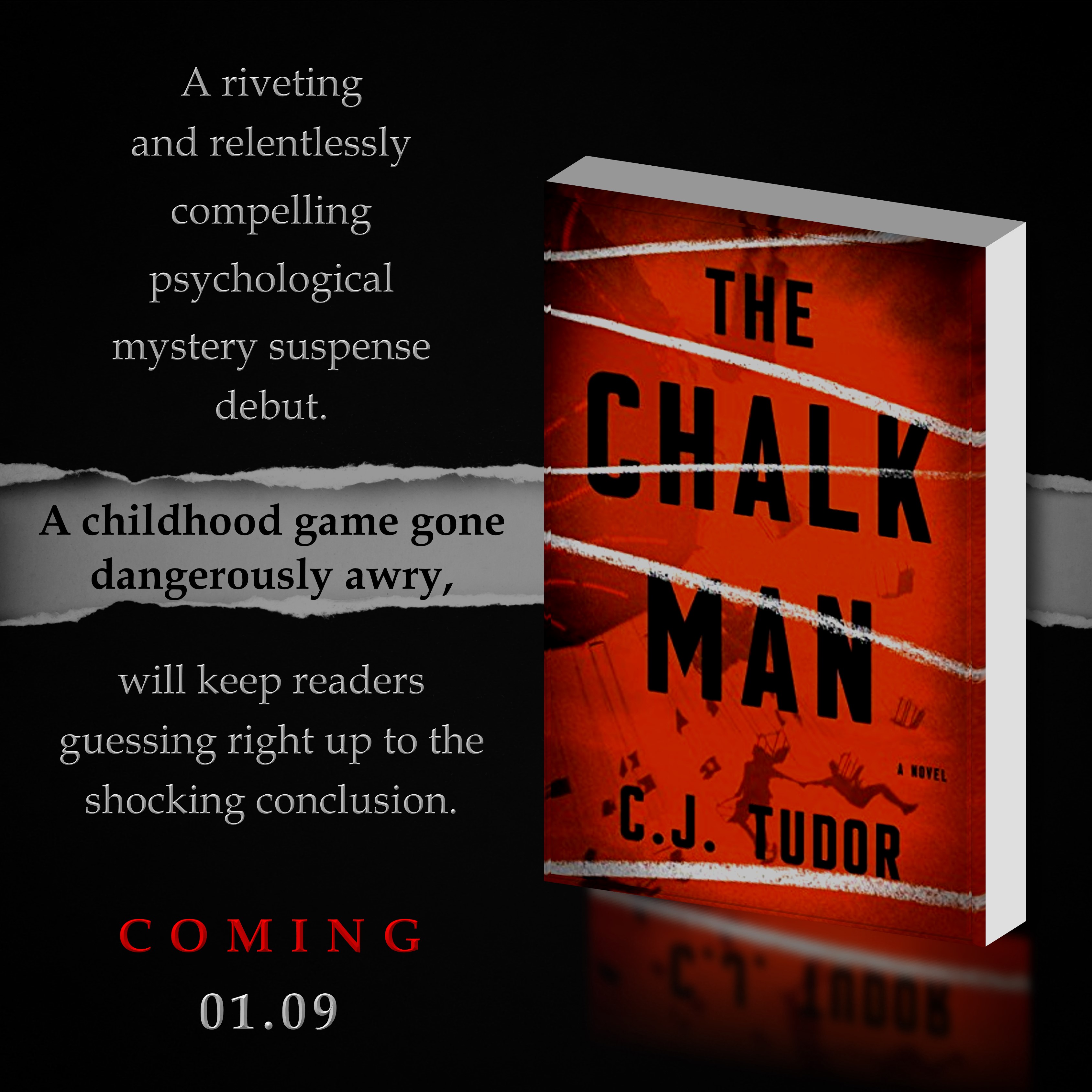 In 2016, Mickey returns to the small village with plans to write a book about the girl’s murder with the approaching 30th anniversary of the killing.

“Time to face the Chalk Man.”

. . . “It’s time to take a ride back down memory lane. Except this route is dark overgrown with tangled knots of lies and secrets, and full of hidden potholes. And along the way, there are chalk men.”

THE CHALK MAN is a gripping exploration of the dark places within the human mind and an impressive debut. Filled with horror. Frightening, compelling, taut, creepy and chilling! A shocking spine-tingling conclusion.

If you grew up in the 80’s (in my case, raising my kids in the 80’s), a sharp reminder of films (books) Stephen King’s Stand By Me and Harlan Coben’s The Five. Two memorable films.

Not sure after reading, you will ever be able to pick up a piece of chalk without thinking of THE CHALK MAN.

A special thank you to Crown Publishing and #NetGalley for an early reading copy.

“Readers will undoubtedly be reminded of the kids of Stand by Me and even IT…[the] first-person narration alternates between past and present, taking full advantage of chapter-ending cliffhangers. A swift, cleverly plotted debut novel that ably captures the insular, slightly sinister feel of a small village. Children of the 1980s will enjoy the nostalgia.”
—Kirkus

“[A] promising debut…with the nightmarish inevitability of the Grimmest of tales…her storytelling prowess is undeniable.”
—Publishers Weekly

“I haven’t had a sleepless night due to a book for a long time. The Chalk Man changed that.”
—Fiona Barton, New York Times bestselling author of The Widow

“CJ Tudor has written an utterly original novel—a thriller in which the suspense comes not simply from what happens, but from that dark place within the human mind from which all the greatest mysteries and terrors emerge.  This one will hold you in its grip to the last page.”
—Joyce Maynard, New York Times bestselling author of Under the Influence and To Die For

“Utterly Hypnotic. The Chalk Man is a dream novel, a book of nightmares: haunted and haunting, shot through with shadow and light - a story to quicken the pulse and freeze the blood. A dark star is born.”
—A.J. Finn, author of The Woman in the Window

“C.J. Tudor knows the twelve-year-old who still lives in all of us, that kid who chills himself to the bone with an intuition of what lurks in the woods, or in his own closet, and The Chalk Man walks the haunted bridge between then and now—between sheer childhood terrors and a true crime so grisly and personal it’s cold hand never leaves the back of your neck.  Suburban adolescents on bikes, squeamish love, nascent sexuality meets adult-world obsession and lust and violence...and through it all runs an affecting story of friendship, loss, and the inescapable frailties of mind and body.”
—Tim Johnston, New York Times Bestselling author of Descent

“The Chalk Man is coming and there's nothing you can do to stop him. Tense, skilful storytelling and plenty of horror.”

“In The Chalk Man, C.J. Tudor brilliantly weaves past and present into a haunting, vividly imagined tale. Much more than a murder mystery, it is a sharp, terrifying exploration of the bonds and limitations of childhood friendships and of secrets that refuse to remain buried. I fell in love with the guiding voice of this novel, the thoughtful and solitary Eddie. Prepare to be surprised again and again, even until the final page.”

“A cleverly constructed, artfully told tale of secrets, lies, and warped passions — featuring a troubled protagonist, a terrible murder that wasn’t what it seemed to be, and a raging monster at the heart of it all.”
—John Verdon, internationally bestselling author of Think of a Number and the Nero Award-winning Peter Pan Must Die

“C.J. Tudor’s The Chalk Man is a stunning debut, a riveting thriller about the powerful grip of the past and the unbreakable bonds of childhood friendship. The ending of this smasher will completely throw you for a loop. Don’t miss a word of it!”
—David Bell, bestselling author of Bring Her Home and Somebody I Used to Know

“The Chalk Man is an intricate and surprising book that will reward the reader who approaches it with the attention it deserves.”
—Thomas Perry, New York Times bestselling author of The Old Man

“It’s been a while since I’ve read such an impressive debut. The pace was perfectly judged, the characters superbly drawn and there’s a creeping sense of unease that starts with the prologue and grows throughout the book. And then that ending! It feels so fresh and deserves to be a huge success.”
—James Oswald, bestselling author of the Inspector McLean series

“What an amazing debut! Such an ingenious, original idea. I was engrossed from the very first page. I loved how the 1986 and present day storylines weaved so skillfully together to create that unforgettable and unexpected ending. Compelling, taut and so very, very chilling. This book will haunt you!”
—Claire Douglas, bestselling author of Last Seen Alive

“C.J. Tudor bursts onto the scene with a page-turning thriller that draws simple but terrifying lines about evil and the haunting nature of childhood. Flip open the first page and you’ll curl up all night.”

C. J. Tudor lives in Nottingham, England with her partner and three-year-old daughter.

Over the years she has worked as a copywriter, television presenter, voiceover and dog-walker. She is now thrilled to be able to write full-time, and doesn’t miss chasing wet dogs through muddy fields all that much.