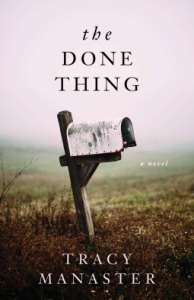 A violent crime from years ago becomes front and center for Tracy Manaster’s characters in THE DONE THING – a tragic event changes the course of lives and nothing will ever be the same. How far will one woman go?

Highly-charged, emotional, and frustrating at times. From obsession, hatred, and revenge to an attempt at forgiveness and acceptance. One life-altering event catapults a family into turmoil, revealing secrets and feeling that may leave them fractured forever.

For eighteen years and four appeals, Lida had waited. Each April she had petitioned. She despised the man, Clarence who had been responsible for putting her sister, Barbra in the ground. Clarence was the husband of Barbra and father of Pamela.

Barbra had left her daughter Pamela behind. Lida had raised Pam. Childless, she and Frank could not have children, and about the time their adoption came through, they had Pam to raise. Before they took custody he girl had spent exactly one weekend in her care.

Prior to her retirement at sixty, Lida was a successful orthodontist. Now Frank was gone, dead . . . and Pam was grown with a life of her own. Married and expecting.

Lida now has more time on her hands to obsess and scheme. She is bitter. She is angry. She wants Clarence to die. To suffer. “Clarence lingered, unshakable as the phantom weight a watch leaves on a naked wrist.”

She knew that once he died she could find new thoughts. She would love to serve him his last meal.

Barbra’s lover. Lawrence Richard Ring. Next Barbra fell, split apart by four bullets. Clarence had picked up Pamela and lied about a dentist appointment. Pamela was in the car. Clarence had been granted three letters to Pamela a year.

Presently, Lida has turned sixty-three and Pamela has purchased her a new computer. She comes up with a plan. She wants revenge. She discovers Clarence Lusk. Be a Penfriend. It’s the Write Thing. Be a Candle to Those in Darkness.

The Prison in Arizona. Inmate 58344. He wants a pen pal. She would change her name and set up a post office. She would be Maisie. Lida crosses a line and begins to write to Clarence. Pretending to be a flirty twenty-three-year-old, in an effort to attain retribution.

Will Clarence open up to her if he thinks she is someone else? Or will he be smart enough to catch her deception? Will she lose control of the situation?

What is Pam thinking or feeling? Does Lida consider her actionsLida thinks she is always rushing to get married, hoping the baby would be born—before the needle. The death of her father.

The author captures every evil thought of this angry, manipulative, and lonely woman. The strained relationship between aunt and niece. Lida is so consumed by revenge has she forgotten the family in front of her. She dwells on everything bad in her life and chooses to believe this one man is at fault and to blame.

The letters between Clarence and Lida delve deep into the human emotions, and how deep the scars run after a tragedy that will forever change lives. How after years it begins to consume her.

Scene (Chapter 35) was well done and quite comical. The phone call and banter between the two. The claws come out.

The description summary from the publisher was right on – fans of Elizabeth Strout’s, Olive Kitteridge — complex; quite similar to the heavy mood of darkness, pain, and gloom. The internal war waging within. Human imperfections and family dynamics. Learning to let go and free oneself of anger.

However, the writing is well-crafted as the author explores the complex minds of humans in the midst of tragedy and the overwhelming need for justice. The consequences of this obsession are at the heart of THE DONE THING.

After reading three books in a row back to back, The Last Suppers(also death row), What Remains True ( the aftermath of a boy dying), and now THE DONE THING. Something a bit lighter with humor is in order.

All three family dramas are well-written books which teeter on literary fiction; however, they are deep, dark, and sad. This is the type of book you may want to mix in among a few upbeat ones.

A special thank you to Gallery Books and NetGalley for an advanced reading copy.