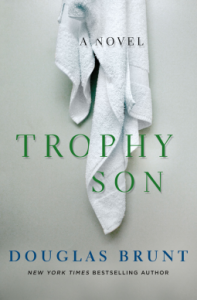 From the author of The Means and Ghosts of Manhattan Douglas Brunt turns to the world of sports with this latest: TROPHY SON – a compelling yet haunting glimpse into the lives of professional athletes; the burdens and sacrifices they bear.

Written with an insider knowledge of the tennis circuit, TROPHY SON explores a young man striving to find balance in his life, navigating moral compromises, performance-enhancing drugs, and the elusive lure of wealth and celebrity.

From Wimbledon and the U.S. Open to the off-court life of elite players, Anton finds exhilarating highs and desolate lows as he searches for an identity apart from his achievements.

Anton Stratis, a tennis prodigy whose childhood is stripped away by an ambitious obsessive father who nurtures talent and resentment in his son.

“A tennis racket lurks in my earliest memories like a sick relative who had come to live with us . . . I had no sensation of milestones and the power to value a moment was never granted to me. My parents had the plan for my life from the moment my mother tested positive with me. . . “

The hard turn: When Anton was pushed to leave school after the eighth grade to play tennis full time and study some with a traveling tutor.

“I know I was born and I know that I’ll die. The in between is mine. “ – Eddie Vedder

Tennis prodigy Anton Stratis is the son of Pennslyvania parents- two former Olympic athletes. His dad obsessed beyond control is determined to make his son a star.

Anton’s parents met in the early eighties. She was an Olympic downhill skier. He an Olympic swimmer. His mom, a natural athlete. Not as intense as his dad.

In the average day he would spend seven hours on the court with this dad blasting tennis balls from a machine, then strategy, watch game film and train with weights. Then in the winter, they would rent a place in Florida with tennis courts to do the same year-round.

His dad, was a retired hedge fund manager and now his number one focus was his son’s game. By the time Anton was fourteen he was good enough to beat the crap out of decent college player— and his dad scouted out the places.

His dad taught him how to approach the court, taunt the players, bait them and then bait them into putting money on the line.

With all the drilling, this meant no friends. No normal childhood.

Tennis was about only hate and suffering.

Anton grew to despise the game.

His dad saw in him what he did not see in his (three years older) brother Panos. He thought Anton could handle the hate. He took the punishment and by twelve he had used it to become an elite junior player. By the age of fourteen, he was on the Penn campus to humiliate a Divison I college player.

Panos drove a Porsche 911 that cost their dad less than his tennis travel each year, so that was supposed to the balance. He liked his brother. They watched out for one another the best they could.

His dad never let anyone come to like him. He was trapped. His dad was ruthless. Obsessive. He even withheld water during the heat of the summer. Torture. There were no water breaks.

There was the beat me, love me. Over and over.

His dad would not tolerate slacking off, complaints, and no talking back. No kid stuff. He would not allow the expression of rage from Anton. His dad was his trainer and coach.

Through the torment, and grueling practice he developed a toughness, a knowledge that no opponent across the net could fathom his training, but it was all built on hate.

The only light he had was reading. If he could not go anywhere physically, he could take the journey with a book. From Hemingway, Faulkner, John Irving, Nelson DeMille, Dickens. Anton loved Dickens. Unfairness, unhappiness, suffering, heroes and villains—glimmers of hope at love and a way out. David Copperfield – the idea of being the hero of your own life.

The mandate was to succeed, win tournaments, be the best. But being the number one tennis player did not make Anton the hero of his own life. It made him the hero of someone else’s life.

“Being the hero of my own life is about something else, something internal. It’s about who has their hands on the steering wheel that’s inside me. It needed to be me and it never was then, and I didn’t understand that until much later.”

His game was not like Agassi, Rafter, McEnroe, Federer; however, he liked them. His game was more like Marat Safin. His dad said he was unique.

There would be no distractions from girls, friends, or outside influences. He did what he was supposed to do.

His whole world was small. The only thing of value was winning at tennis and losing was Armageddon. Losing was trauma. His dad was more invested in tennis that Anton. A loss to an inferior player would not be tolerated.

“Some parents feel their position of unconditional love permits unfettered abuse. They can rationalize self-forgiveness for harsh treatment because parenting is an obligation and only the parent can do certain things. . . “

From triumphs, failures, to the highs and lows. The dramatic rise through the intensely competitive world of professional tennis. From abuse and performance-enhancing drugs pushed by a domineering obsessive father pushing a son to exceed at the expense of his own happiness.

The author pulls the reader into a world filled with conflicts and struggles of a young boy, through his teenage years to adulthood, the pro-circuit and Wimbledon. A strife for happiness, self-fulfillment, and pressure to succeed.

Some may find some similarities with Stratis’s father resembling Andre Agassi’s, an overbearing former Olympic athlete and immigrant.

As in Open (highly recommend) his autobiography— Agassi reveals off the court he was often unhappy and confused, unfulfilled by his great achievements in a sport he had come to resent.

“Trophy Son” was inspired by how childhood sports have changed since his youth to become highly specialized and competitive, as the pressures on athletes trickle down from colleges to high school to youth sports, adding incentives for them to try performance-enhancing drugs.

An engrossing tale for anyone who loves the game of tennis, and a cautionary tale for parents who utilize pressures and tactics to push a child in our overly social and achievement-obsessed society of perfectionism. Well done!

A special thank you to St. Martin's Press, and NetGalley for an early reading copy. Cover Love.

Douglas Brunt is the author of the New York Times bestseller Ghosts of Manhattan and The Means. A Philadelphia native, he lives in New York with his wife and their three children.

Until 2011, Douglas Brunt was CEO of Authentium, Inc., an Internet security company. He now writes full time and is currently working on his fourth novel.

Doug’s new novel will be released on May 30th, and is available for pre-order now.  Read More

A NOTE FROM DOUG BRUNT

The first thing I do after I’ve finished reading a novel is to flip back to the beginning and read the author’s first sentence again.

All novelists try to set the trajectory for the book with the first paragraphs of the first chapter. As a novelist myself, I love the opportunity to write that first sentence.

Once readers of my books have completed the journey with me, if they come back around to re-read the first sentence, they should have a greater understanding of it.