Paula Hawkins who took the literary world by storm, with her first murder mystery sensation, The Girl on the Train, which of course came to sell approximately 20 million copies and a major motion picture (loved) starring Emily Blunt, returns with the highly anticipated INTO THE WATER —a twisty, complex, bold, and ambitious follow-up, which may be even better!

Whereas, The Girl on the Train involved more of a murder mystery centered around three perspectives, a commuter train, alcoholism, infidelity, and cozy suburban homes; INTO THE WATER, is centered around a village of people from multi-generations of women, men, teens, and those spirits which have passed on. From multiple perspectives (a dozen or so), critical to the atmospheric, Gothic, dark crime noir contemporary suspense tale—leading to the shocking climax.

The “last four words” will leave you holding your breath. You are assured to re-read them again and again. It is worth the journey, so sit back and enjoy the ride.

“Beckford is not a suicide spot. Beckford is a place to get rid of troublesome women.” Murky waters hide dark secrets.

INTO THE WATER is a mix of historical fiction, psychological, paranormal, and Gothic, taking us back to over 300 years of murders, suicides, and suspicious deaths of local girls and women in the area. Some women were called witches.

Beginning in 1679, when the first woman was forced into the water under suspicion of witchcraft, and to the present day with the suspected mysterious "suicide" of Danielle "Nel" Abbott, an obsessive journalist and photographer who dedicated her life to raising her daughter, Lena and her work. Especially the truth about The Drowning Pool.

A book of childhood memories.

What we learn and hear as a child may not always be the reality. People will try and protect, they will spin a story to suit their own needs. The truth may not ever be clear. We may think a certain way; however, we may learn too late, the story was not as it appeared. What is the truth? Never assume you have all the facts.

Memories of childhood stories we tell about our lives. We recall a situation and may have a clear memory of it and then discover something that is completely false or the interpretation may be different – things which shaped our lives and made us the people we are today. What if we were wrong?

“We now know that memories are not fixed or frozen, like Proust’s jars of preserves in a larder, but are transformed, disassembled, reassembled, and recategorized with every act of relocation. – Oliver Sacks, Hallucinations

First, let me start out by saying a few words which hopefully will have some impact on your reading experience. Do not make comparisons.

INTO THE WATER is a totally different book than Hawkins' first. It is strong enough to stand on its own merits. I discovered through an online interview - the author was working on this idea before The Girl on the Train and continued to work on it even during the first book promotion.

As you can only imagine the pressure and scrutiny involved when you now have a built-in audience, expectations, publishers, editors, movie critics, and fans to please. Not her first rodeo. I commend the author, which could have taken the lazy approach and rested on her first success. Hawkins, after all, is the highest paid author in the world. She had nothing when she began. Instead, she creates a complex and highly absorbing story which had to be a “bear” to write with all the many perspectives and timelines. However, she pulled it off like a rock-star!

Hawkins mentioned in her interviews, she wanted to provide readers a totally unique experience. In my opinion, she exceeded her goal. INTO THE WATER is complex and when you read it, you will understand. This is much more than a who-dun-it. It is a why-dun-it and how-dun-it?

At the center of the story is The Drowning Pool. The crime novel is set in Beckford, a gloomy dark historic fictional village town overlooking the river where an unprecedented number of women have drowned or ended their lives. You can feel the darkness and black cloud.

These women were brought to the water (forced), suffered, or accused of witchcraft to see if they would sink or swim. Some thought it was a place of horror. For some, a place to cover up their crimes (to bury their secrets).

Two of the latest apparent suicides is the single mother Nel Abbott who has been investigating the history of these women for a story and a young teenage girl, Kate. Lena is Nel’s daughter and Kate’s best friend, so she has lost two people very close to her. Did they jump or were they pushed? Not only these two but all the ones from ages past.

The lives of the women who went to the Beckford Drowning Pool. A place that over centuries has claimed the lives of Libby Seeton, Mary Marsh, Anne Ward, Ginny Thomas, Lauren Slater, Katie Whittaker, and more- countless others, nameless and faceless.

Why and how? Some would rather hush, suppress, silence. Nel wanted this memoir of her life and the Beckford pool starting with the swimming of witches. Some say the women left something of themselves in the water; some say it retains some of their power, for ever since then it has drawn to its shores the unlucky, the desperate, the unhappy, the lost. They come here to swim with their sisters.

Another key character is Jules. Jules Abbott is the sister of Nell. They are estranged. They grew up in the Mill House. Nell was always obsessed with the women in the river. What they did and who they left behind. Now, did Nell take it too far?

Jules was always the fat sister (or so they said), the ugly one, and Nel the pretty one. A misunderstanding. Now she is forced to return to the place she never wanted to come back to look after her sister’s daughter (her niece), to sort out the bloody mess. She relives her past. The old memories resurfaced. Disturbing. Chilling. However, what she thought as a child was not the way it happened. No one ever communicated. There are many with dark grim secrets of the past. A picture is worth a thousand lies.

“I was very young when I was cracked open. Some things you should let go. Others you shouldn’t. Views differ as to which – Emily Berry, The Numbers Game

Amidst the drama, lies history in the town of Beckford. The Drowning Pool was a cliff-black and dark while sparkling in the summer. Contrasts. A place of spirits, hopeless people, despair. A place where people (women) go to end their lives. Or is a place where men use to end the women’s lives? Some of them went into the water willingly, some did not. Some went in fighting. A place of secrets. People turned a blind eye.

No one liked to think about the fact that the water in the river was infected with the blood and bile of persecuted women, unhappy women. Not many people believed Nickie Sage, a woman who speaks with the spirits. Nel listened when she began writing a book about the events of the river and the haunted past.

Detective Inspector Sean Townsend also has a past. He appears to be the upstanding policeman. His father Patrick was a former police officer known for his violence. His mom was also a victim of the Drowning Pool. Did she commit suicide or was she killed by her husband, Patrick? Did Sean as a boy witness his own mother’s death? What is real or what had he been told or made to believe?

There were stories of witches dragged to the water since the 16th century or desperate women flinging themselves from the cliffs to the rocks below.

Not many people liked Nel. . She likes married men. She was investigating. People in this town like to keep their dark hidden secrets under the radar. (and boy they are plentiful). Everyone wanted to put the deaths behind them, to get on with things.

The author dives into gritty subjects of women’s abuse, underage teens having sex with older men, body image issues, and violence. You will be second guessing everyone and there are some evil characters who never take responsibility for their actions. Always passing off the blame. No one can be trusted.

I can actually see this one playing out as a mini-TV series similar to Big Little Lies versus a simple movie. It has enough material to continue for numerous episodes. It would be powerful with the right cast.

When approaching the last part of the book, it was absolutely unputdownable. For days, this one grabbed my attention. Mind-bending, and captivating! I loved Nikki (psychic) she is cynical and humorous. Very bad men and the women persecuted, even in the present.

My reading experience: I pre-ordered the audiobook and within the first couple chapters, I realized this was not the kind of book you could be listening to while multi-tasking doing other work or running errands. There are multiple characters and you need to pay attention and learn the major players. All these introductions play into the bigger picture. From the middle to the end, the pieces all begin to come together. You will think you have guessed, and then you turn the page and think again. Trust me, you will be guessing to the final words.

I decided to slow down, give the book my undivided attention. Also as a book blogger, I tend to speed read- rushing to get to the next book, as many of us do on a time schedule. However, with the wide range of reviews for this book, I wanted to spend more quality time. After listening to the entire audiobook and rewinding numerous times, attempting to bookmark, I decided to purchase the kindle book version, which was a nice way to go back and collect my notes of the characters for review writing.

The audiobook was fantastic with an award-winning lineup of talented performers; however, would recommend both audio and book format. Laura Aikman, Rachel Bavidge, Sophie Aldred, Daniel Weyman, and Imogen Church (she is always spectacular).

I read the editorial reviews the day the book released- the negative and positives. What I found most helpful were the interviews with the author. I enjoy learning about the inspiration behind the book. It will enhance your reading experience. In addition, enjoyed reading about Hawkins and her writing experience with her last book- having to borrow money from her dad to take the time to write the book. It was her last shot. She hit the literary jackpot. This is truly an inspirational story for any writer or reader. A success story.

In Summary: I am more excited about the film of INTO THE WATER, more so than The Girl on the Train, even though I loved TGOTT movie. What will be interesting: all of us from the US hope it will once again be filmed here in the states (like her previous movie); however, sure the UK will want it to remain in their own backyard. Either way, I know it will be a "hit" and one I am dying to see! 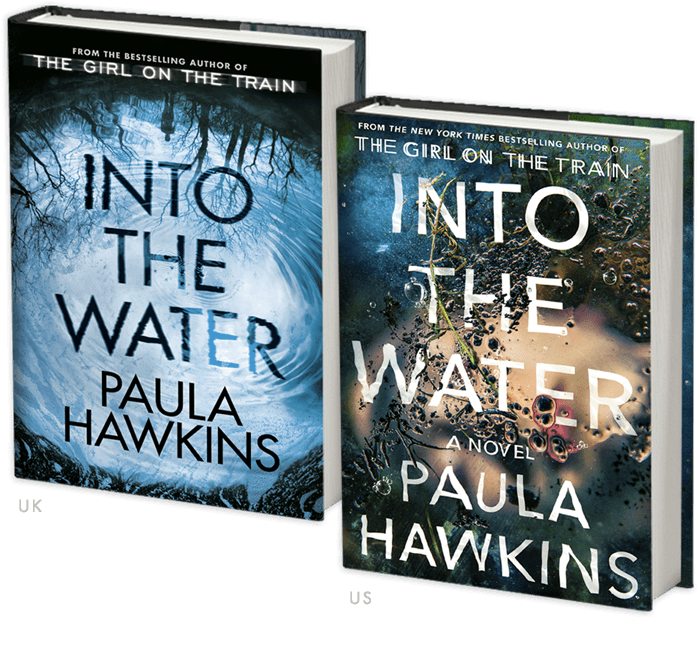