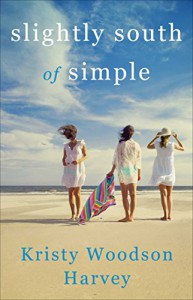 Talented Southern storyteller, Kristy Woodson Harvey returns following her debut Dear Carolina and her strong follow-up, Lies and Other Acts of Love landing on my Top 50 Books of 2016 with the first of a new series, Peachtree Bluff: (Top Books of 2017) SLIGHTLY SOUTH OF SIMPLE — a mother and her three grown daughters are all at a crossroad in their lives, and each has choices to make.

Compelling, emotional, full of humor, infused with love, life, tears, and joy with a little romance sprinkled in and some scandalous family secrets! A poignant and heartwarming story of three daughters and their mother determined to help them rediscover their southern roots and family bonds.

Matriarch (mother), Ansley Murphy has made a simple life for herself in the small harbor town of Peachtree Bluff, GA. Her grandmother left her the beautiful and spacious coastal large clapboard home with a guesthouse.

Her husband Carter was killed seventeen years earlier in the 9/11 tragedy, and she has carved out a nice life for herself with a successful waterfront design business. Her own mother lives in Florida. She also has an annoying neighbor next door, Mr. Solomon, with some great local friends and clients.

Ansley has some secrets about her husband. Others about herself. Things the girls do not know. She has put her family first all these years. Will her time finally arrive at long last?

An attractive woman, age fifty-eight, she works out and stays in shape. She does not date and pretty much has thrown herself into her business, her grown daughters (when they allow) and grandchildren. It was difficult being a mother of grown children. They are strong willed and have a mind of their own.

However, living alone with her normal routine will soon change. She may get more than she bargained for. Three grown daughters return to move in with her and soon to be four grandchildren. Man, do they have different personalities!

Caroline was her least favorite daughter, even though she loves her, she could be difficult at times. She even named her interior design shop: Sloane Emerson (after her two younger daughters), since Caroline wanted no part of it, referring to it even today as a camper-trailer design business. She had said if she named the store after her she would die. No one lives up to Caroline’s standards.

Eldest: Caroline, a New Yorker thinks of this small Southern town as hick-hellhole. However, now she may have no choice but to return to the place she tried hard to escape. When she married James (14yrs), she thought they had in all, until she was six months pregnant with her second child and he informs her he is in love with his twenty-one-year-old supermodel, Edie Fitzgerald.

So she decides to take a short sabbatical with her eleven-year-old daughter Vivi and head to Peachtree. Maybe she can take over the guesthouse. She is very picky, high maintenance, and does not like germs. She worries about what others think and say. Only the best of fashion and ultimate fitness will do.

Sloane, the middle child was the selfless one. Of course, she was laid back and could care less about germs or any of the things which mattered to Caroline. She is the timid one, married a local boy had her family and remained in the area. Her military husband is overseas so she decides to crash at the house as well to spend time with her sisters.

Emerson is a successful film star. She is thin, eats healthy and stars in a movie shooting in the Georgia town, so decides to stay at the house to spend time with her sisters and mom.

With all the emotions running high of three different personalities of grown daughters, sisters bickering, grandchildren and an old boyfriend back in town, Ansley has her hands full. In the midst of it all, Ansley fears the secret (s) will come out. Those she has harbored for years to protect everyone.

After Ansley’s pain from losing Carter, and sometimes her daughters hating her (like most girls), hiding Carter’s secrets, and hiding her own. She just could never imagine starting over with anyone new. No one else could possibly understand her life.

Jack was Ansley’s first love. However, back then they decided to go their separate ways because he did not care about having a family. This was important to Ansley. Now, Ansley is shocked to learn Jack is here in Peachtree Bluff and wants her to redo the design for his boat. He has made his money and can travel.

Everyone knows she is the best yacht designer this side of the Mason-Dixon. She cannot let this happen, especially now since her girls were coming home. Is he a threat to her safe family world? Why?

However, as the complexities of these sisters get tense, the family come together, the girls find they want their mom to be happy, and at the same time, they all may just learn something from one another. They may figure it out together. Peachtree Bluff is a town of hidden truths and stolen moments and a family who loves one another. A time of discovery for all of the women.

Crossing generations, Harvey always brings out some dark family secrets which have been securely buried. A poignant journey of healing, bonding, forgiveness, and redemption. Things, people, and places which shape our lives.

Kristy once again delivers a charming Southern story of family, sisters, relationships, motherhood and reinvention. As you are reading you will relate to certain characters. My favorite was Ansley. Such a strong woman and continued to root for her. Hoping she would find some happiness.

She is protecting herself from something she didn’t need to be protected from. She was protecting her daughters from a threat that wasn’t really a threat at all. But she is opening her heart. One that had been closed for so long.

Character-driven, the author has made her way quickly to the top of my favorite author list and one of the best Southern contemporary storytellers of today. (Highly recommend all three books).

As a native NC /GA gal myself, so refreshing to discover an author who breathes life into each of her characters, while transporting you to the beautiful coastal areas of the Southeast we love. She writes about strong women and the challenges of life, both personally and professionally.

From her first debut, I fell in love with the author's richly textured, authentic heartwarming style. You can come to expect strong family bonds, romance, secrets, plus someone will be a little wiser after the journey. If you have not read this author, get busy. SLIGHTLY SOUTH OF SIMPLE should be at the top of your beach bag! Summer doesn't begin without a Kristy book.

Yay! I hear from an online interview we can expect more from these characters with #2 Peachtree Bluff THE SECRET TO SOUTHERN CHARM, featuring the middle sister, Sloane and of course more from Ansley and Grammy.

I will be anxiously awaiting. Cannot wait to see what is in store next for the Murphy women! More Ansley/Jack, please!

A special thank you to Gallery Books and NetGalley for an early reading copy. 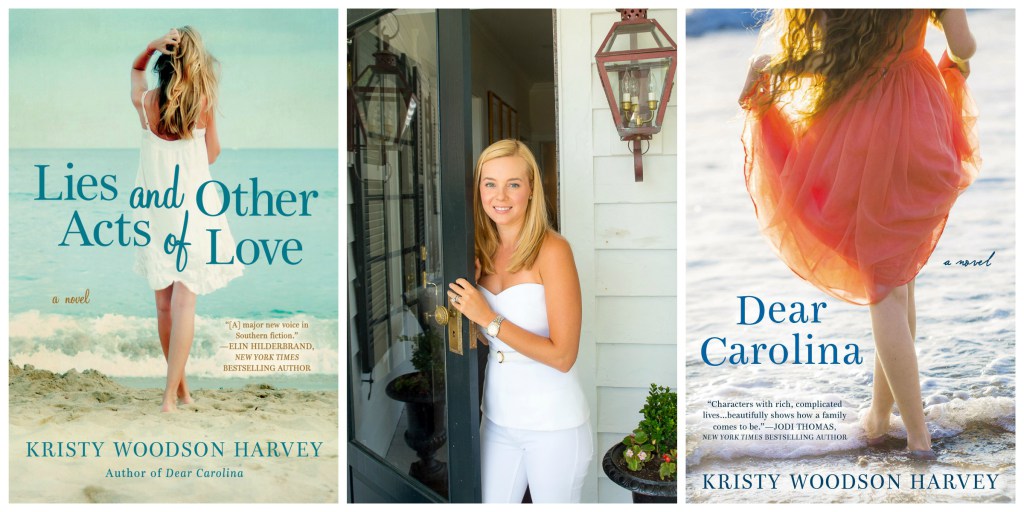