The Night the Lights Went Out

* Join Me. Blog Tour Host April 11 * THE NIGHT THE LIGHTS WENT OUT It’s the first novel Karen has set in her hometown of Atlanta. We are celebrating every day for two whole weeks!

Destined for the Big Screen (see my cast selection on my blog) The queen of the south, Karen White returns following Flight Patterns on my Top 50 Books of 2016 with the highly anticipated THE NIGHT THE LIGHTS WENT OUT.

As sweet as a Georgia peach, and as scandalous as Desperate Housewives’ Wisteria Lane, and Big Little Lies. Set aside the time, readers . . . you are going to love Sugar!

The Southern Queen B has created her best yet! Yay Atlanta . . . From the stunning WOW cover and the memorable characters, Karen White grabs you and pulls you into this Southern suburban neighborhood filled with drama, revenge, secrets and lies, while exploring the true meaning of friendship. It is not always as it appears.

An anonymous blogger offers up entertaining essential Southernisms any Yankee in the South should know, sprinkled throughout. “It’s never about the secret itself, but the keeping of it.”

From the wealthy private school, social climbing moms to a young single divorced mom who discover (the hard way) . . . the true meaning of friendship and the dangers of deception.

Against the modern-day scandals, we meet matriarch Sugar Prescott who is at the center of the novel. A grounding force. A courageous woman you want on your side. Sugar is wise, and has had her own share of tragedy and can relate to her new tenant, on more than one level.

Merilee Talbot Dunlap had learned in eleven years of marriage, it was the simple fact that you could live with a person for a long time and never really know him. One day the mask slips. Her husband, Michael has an affair with their daughter’s third-grade math teacher, Tammy. Merilee decides she does not want to stay in the house with all the reminders. She was traded in for a younger woman. She needs to escape from all the gossip.

However, she is unaware, it may be the lesser of two evils. What lies ahead at the new location, may be even more devastating.

Merilee is the mother of ten-year-old old daughter Lily and eight-year-old Colin. They were now moving into a quaint furnished Craftsman historic cottage (with a cellar) for tornados, located behind Mrs. Prescott’s farmhouse in Sweet Apple, GA.

The landlord is a southern matriarch and well-respected in the community. Some say she is harsh. She is known as Sugar. She is widowed (Tom was killed in the war) and no children. A mystery to some. Fascinating and eccentric to others.

Sugar Prescott (Alice Prescott Bates) is ninety-four years old (what a great character)! She lives alone in an old farmhouse on her family’s land. Her loyal best friend Willa Faye Mackenzie. Willa Faye moved to a senior living facility. While Sugar was staying put as long, as possible. A realtor had found the young mother and her two children as her new tenants.

Not that she had any desire to befriend her new tenants and neighbor, but Sugar had the feeling that Merilee was suddenly on her own and in need of help. Sugar was in a position, to understand that need more than most. She suspected but would deny if anyone asked, that she was getting soft in her old age.

Of course, Sugar did not realize this single mother would be this young and pretty. Mid-thirties. She wonders what happened to her marriage? Surely the woman had flaws. Sugar soon discovers a few. Heaven forbid, the woman does not even know how to cook, nor does she know her proper Southern graces! Sugar must teach her a thing, or two.

. . . “At least by the end of the day, you’ll know how to bake cookies and fry okra. Because it might be against the law for a Southern-born girl not to know how. Along with changing a tire.” . . .


Despite all her attempts to keep her new tenant at arm’s length, a tenuous connection had been formed. They may have more in common that they may suspect. Merilee at first thinks Sugar is a little strange and is judging her. However, soon their bond strengthens.

The best award-winning part Think: To Kill a Mockingbird This is where White always "shines" with the historical past and dual timelines. Sugar begins telling Merilee bits and pieces of her life on the farm as a girl during the Depression, starting from 1934.

Normally she is closed-mouthed about her past (in a world of oversharing), she likes keeping some things to herself. However, somehow, she feels comfortable opening up to this younger version of herself.

Sugar’s dark life during the Depression in Sweet Apple provides a very different look at life compared to the present-day of the same town, especially those in Heather’s world.

A nice edition to the story: Wade Kimball is Willa Faye’s grandson, and he looks in on Sugar. The developer, and handyman. He helps with any of the maintenance issues for Sugar and her new tenant.

As Merilee and her children begin to get settled in, she meets a variety of moms. One, in particular, Heather, which is like “perfection.” The perfect wife, mother, house, children, food, social standing, glamorous, clothes, and home (s) with the good-looking nice husband, Daniel. Merilee feels inferior next to her.

As the kids become involved in their new school and Merilee in carpools and committees. She just wants to be accepted, like a kid at school. Peer pressure is tough. Soon her daughter comes home and tells her about this anonymous blogger.

It is called: THE PLAYING FIELDS BLOG. Observations of Suburban Life from Sweet Apple, Georgia Written by Your neighbor. Who is this person and how does she know so much about their Sweet Apple lives?

The blogger dishes out a variety of gossip and offers a few Southernism tidbits for all the newbies at the end of each installment. No one knows but they think it could be a mom at Windwood since she seems to know a lot about what goes on at school, the community, and their lives. (yes it is spicy, sassy, and oh so funny)!

In the meantime, the perfectionist mother Heather at school is befriending her. Merilee gets pulled in by the attention and her affluent lifestyle. She has taken her under her wing. Merilee grabs on, desperate for new friends and acceptance. Looks can be deceiving. Of course, Sugar does not trust her. A backstory here. Merilee also has a mysterious past; however, she is not so forthcoming, until it all unravels later.

Between Sugar’s stories from the past, Merilee’s own drama with her wealthy friends in the present; the school, her children, her ex-husband, his girlfriend, and a baby on the way, worrying about measuring up to her new friend Heather, and the constant reminders of her life from an unknown blogger and social media; she feels like she is on a reality TV show.

. . . and there are some other strange happenings. Daniel and Heather are acting weird. Plus, Merilee has her own memories and guilt from the past which may be coming back to haunt her.

Then someone is murdered at the lake house (Lake Lanier). The suspicions are pointing to Merilee. Is someone setting her up? How will she prove she is innocent based on her past? What motive do they have for hurting her?

From murder, attempted murder, revenge, and a tornado. It wouldn’t be the South without a little drama and deceit sprinkled with some sugar. Female friendships are at the heart of this page-turner.

5 Stars +++ Top books of 2017! Move this one to the TOP of your list. You are going to love it! (cover obsession) Karen White just keeps getting better and better.

Grab a hammock, a swing, head to the beach, or a front porch rocking chair. Mark out the time and sit back and be prepared to be entertained Southern savvy style!

For my movie cast wishlist and more about this exciting book and author, Visit my Blog

A special thank you to Berkley and NetGalley for an early reading copy. I also purchased the audiobook for an outstanding Southern performance.

Karen White is one of my favorite southern writers. As a Southerner, myself, (NC/SC, GA, FL), she makes us proud. BTW, now I know where she gets her beauty . . . from Mississippi, of course.

Book Giveaway Contest
Congrats to the winner: Amy Sullivan, Prescott Valley AZ! In celebration of upcoming blog tour:Book Giveaway April 4-11 Flight Patterns  now in paperback format, in time for beach weather.  Thanks for all the participation and entries. 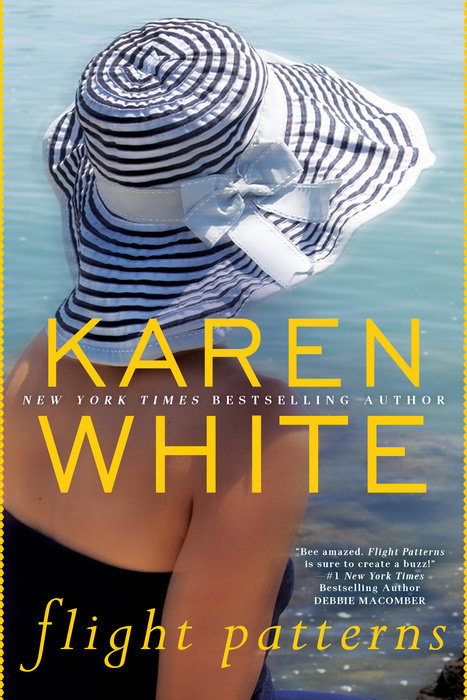 I enjoyed the inspiration behind the book and Author Q&A
of what's coming next. Atlanta Magazine