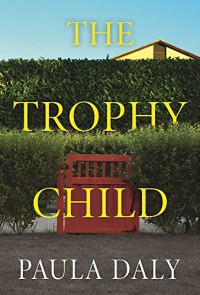 Paula Daly returns following The Mistake I Made landing on my Top Books of 2015, with her fourth and latest domestic suspense THE TROPHY CHILD with an array of dysfunction and madness, mixed with mystery.

Our favorite DS Joanne Aspinall (from previous books), revisits—always finding herself in the middle of trouble and mischief.

Karen Bloom (achievement-obsessed) is a tiger mom to ten- year-old Bonte. Karen is married to womanizer Noel and does not pay much attention to her stoner son, Ewan, and her teenage stepdaughter, Verity (drug possession). She had to agree to weekly onsite drug tests and counseling sessions.

Of course, Karen compares the other two children, to her precious Bonte. Brontë goes missing, and Karen is, of course, crazy with worry, since her daughter is her life.

Karen did not care that people called her a tiger mom. She was proud of it “It was an easy way to justify their own lazy lives, their own acceptance of mediocrity.”

And Karen was very sorry, but she wasn’t having that for Bronte. It was her duty to prepare her daughter for the life ahead of her in the best way she knew how.

Life was a competition. Only the best and the brightest succeeded, and if that meant Karen had to put her own hopes and dreams on the back burner, while she invested everything she had in Bronte’s future, so be it.

In the meantime, we catch up with Joanne, joining secondchance.com and her share of bad men and dating. She is always good for a few laughs.

Joanne is called in to investigate when Bronte goes missing from Windermere. She soon learns and is shocked to find a connection to Noel. (Seamus-whom she had gone to bed with six nights previously). She had no idea he was married. She had sex with the father of a missing child. Not cool.

Noel is a small-town GP. He had to be careful so as not to run into his patients. There was his first wife, then Karen. Second marriage problems, and stepchildren.

The child returns unhurt, (where was she), but not before Karen has stirred up all sorts of problems and outrage. Then Karen turns up murdered. Not liked by many, did Noel kill his wife? Was she sleeping around? There is a long line of suspects.

Now Joanne must find the killer and figure out what happened to Bronte. Was the same person involved?

A crazy bunch, this was my least favorite of all Daly’s books. I have read all her books and each has been 5-star, except for this one. Too much drama and not enough likable characters, except for Joanne (she is always a spark); however, beginning to question even her choices.

A special thank you to Grove Atlantic and NetGalley for an ARC in exchange for an honest review.