A Time of Torment 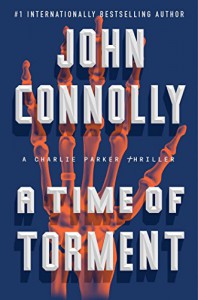 A TIME OF TORMENT, John Connolly's latest chilling and gripping suspense thriller crossing over to the dark (er) supernatural side with Charlie Parker #14.

The Cut, an area of ten square miles of Plassey County, east of Charleston, West Virginia.

An independent quasi-medieval community, an irreligious cult, presided over by capable, ruthless men with names such as Oberon and Cassander.

A litany of killings and disappearances over the best part of a century and a half.

If the people of the Cut took it upon themselves to give the county an edge by warning off anyone who viewed it as an easy conquest for drugs, prostitution, racketeering, or excessive corruption. Time to bring the Cut to an end.

Jerome Burnel was once a hero. He intervened to prevent multiple killings, and in doing so destroyed himself. His life was torn apart. He was imprisoned, brutalized. He wants Charlie to clear his name.

He speaks of the girl who was marked for death, but was saved; of the ones who tormented him, and an entity that hides in a ruined stockade.

Parker is not like other men. He died, and was reborn. He is ready to wage war.

Now he will descend upon a strange, isolated community called the Cut, and face down a force of men who rule by terror, intimidation, and murder.

Somewhere in Plassey County, West Virginia was a Dead King.

Now the disgraced Burnel, is out of jail and seated in the Great Lost Bear across a table from private detective Charlie Parker and his associates, Angel and Louis. Burnel claims he was set up: for the child pornography at the very least, and quite possibly to have been robbed and killed in that gas station heist. By the time Parker decides to take the case, Burnel has already been seized and taken into “the Cut”.

Charlie Parker is haunted by his past with an investigation leading him into a creepy cult group called the Cut.

Parker’s investigation leads him in several directions before eventually pointing him towards a weird, creepy, cult-like evil group who call themselves the Cut. This is a group you do not want to cross, especially the master, Dead King.

"Was it a symptom of their collective madness, an infection of the mind passed down through generations. A voice, given, to a form that they themselves had created?"

From wickedly dark and evil, full of horror, a man haunted by the death of his wife and child, he continues to courageously fight the battle against the darkness. Entertaining!

"It should be noted that children at play are not merely playing; their games should be seen as their most serious actions." -Michael de Montaigne