The More They Disappear 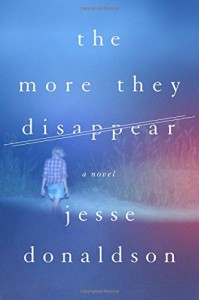 An exploration into the darkness of a small town from the aftermath of addiction, drugs, poverty, and corruption. However, the devastation reaches far behind the rural Kentucky town, and not limited to any social class, or gender.

If you look beneath the gloom and sadness of the troubled lives of the characters, you will be drawn to Donaldson’s prose, his vivid descriptions, and the usage of many metaphors.

Set in the fall of 1998, troubled teenager Mary Jane Finley kills Sheriff Lew Mattock with a rifle shot at a fund-raising barbecue in Marathon, Kentucky. He was fifty-two years old.

He had at least three more terms if they voted. The BBQ was meant to be a celebration of Lew, one in a series of campaign events leading up to his coronation as Finley County’s first ever four-term sheriff.

Now the election was a month away and people would expect Harlan to run. Plus, what evil lies behind Lew’s murder. What had this man allowed? A web of deceit and lies.

Sheriff Harlan Dupee. Harlan knew that being sheriff was more about politics than policing. Marathon was the only place he had ever called home, but he had never fit in. His own father had drowned in the river, and his mother followed him not long after in a mental hospital.

The only woman he had ever loved died, and that took something out of him (intriguing backstory here which connects to the present). Lew never cared for newfangled ideas from his suggestions. Maybe the town would look at him differently when he found Lew's killer. However, his investigation into Lew's past is front and center.

Harlan was reminded of how close Lew kept the kingmakers of Marathon. Not just the local politicians. There were heavy hitters from the state. However, he is about to uncover how far the conspiracy actually reached.

The pills were Mary Jane’s ticket out of Marathon (or so she thought). Mark had called Oxy a miracle drug. It offered separation from her father’s passive-aggressive insults and her mother’s chin smoking sadness. Separation from the fat girl in the mirror. Separation from a life that had stalled out in high school.

Oxy offered oblivion. Mary Jane’s mom thought drugs were the problem. She did not know they were her solution. However, could she be wrong? She had failed. She couldn’t even manage to run away, who committed unforgivable sins, a girl who deserved whatever tragedy came her way.

Then there was Mark at college. The money from the drug sales. He and Mary Jane had calculated the $25K was enough for them to live on for a year. His dad and Lew- protection from the law. Paying Mark’s tuition at college became contingent on his enrolling in the pharmacy program. His dad in the medical field. Mark was a pawn. His father and Lew both possessed voracious appetites. Each demanding a bigger share. When desperation turned to evil – they would turn against one another.

Murders in Finley County were usually straightforward; wives fed up with abusive husbands, cuckolded husbands exacting revenge on unfaithful wives, friends and families turned against one another for reasons of money, sin, or pride.

In addition to finding the murderer, Harlan has a bigger task, at hand. To determine how far reaching the greed, corruption, addictions, and dark secrets go. Who was responsible and how can it be stopped, before destroying other innocent lives? The drug lords of Marathon. Unhappy homes. The world was an easy place to fade away.

The Bonnie and Clyde (Mark and Mary Jane). It was Mark who kept her from spiraling down. Mary Jane is a perfect example of self-destruction. She risked everything for Mark. Lew Mattock was dead. He had been about to arrest Mark. Prison was not a place for him.

As mentioned in an online interview with the author, the title of the book alludes to many things. Harlan, the sheriff is at the heart of the novel. With metaphors of the river. A look at his life.

How is a river made and how does it form, in relation to the lives of the people in this town? Forgotten people. How do they disappear? Numbed by drugs. They want to disappear.

Can you escape your, environment?

The author does an outstanding job of detailing the drug Oxy; how it is misused and takes over lives. It does not discriminate by social class, and neither does addiction. As the author mentions in his interview, his desire was for his book to be more than just about the most downtrodden folks in the most depressed communities. The misconceptions.Indeed, he accomplishes this goal. People tend to stereotype. It goes far beyond.

When reading Donaldson’s words, am strongly reminded ofT. Greenwood’s writing (one of my favorite authors), as well as Rochelle B. Weinstein ---the usage of metaphors often in their writing as relates to water and nature.

“Dredge the bottom of any river and you’ll find things forgotten, things left behind, things pitched over the rail or fallen from the sky, things carried by the wind and worn down. Dredge these things up and you’ll have more questions than answers, but the river will keep moving, keep changing, keep pushing until it is weightlessly floating to the top.”

Once I read how rivers and falls are strong metaphors for understanding addiction recovery. In relation to addiction; if the addict stands at the edge of acting out (the falls); the power of the river will sweep him or her over the edge to acting yet again.

Like the rivers, so it is with addictions. Addicts cannot live their lives standing at the precipice of acting out, where compulsion has its greatest power and strength, and expect sobriety to survive. Yet again, addicts will be pulled into the abyss, losing control to addictive behaviors.

To find recovery, they must move upstream to safety. It is just common sense to stay out of places and situations that lead downstream. These calm, upstream waters are the waters of recovery. Finding them, and learning to stay in them, is where healing from addiction begins.

However, the characters in the book, as well as often in life – do not remove themselves from these troubling waters, (is key), when they see no way out- they continue drowning and sinking deeper into the muck of their lives.

Life — “like the river” — flows, one must work to maintain this safe position by setting mooring lines. With actions and behaviors, that keep the addict anchored safely.

The characters are prime examples of dangerous places, circumstances, consequences, acts of desperation and addictions. Fears. From the elderly people selling their prescriptions to keep the heat on; to kids popping pills to getting high. A man haunted searching for redemption.

Winning elections or doing what’s right. A medical practice. Greed. Distrust. Murder. A man who has lost faith in the law. The darkness haunts him. A man who wants to save people before the wrongs; before it is too late.

Readers will find a character to sympathize with. Harlan was that character for me. Well written, I am looking forward to reading more from this talented author!

Note: My apologies for the tardiness in the posting of my review. I had the pleasure of reading this fabulous book, back in July; however, had a death in my family; pretty much wiped out the month of August; I continue to play catch-up with my reviews. However, not forgotten.