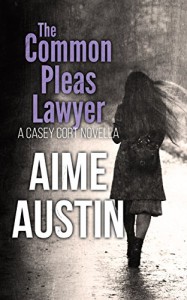 By:  Sylvie Fox as Aime Austin

Sylvie Fox now writing as Aime Austin for her (legal series -clever move) taking us back to the beginning to learn how it all began, with THE COMMON PLEAS LAWYER, one of my favorite sassy, smart, and witty lawyers, (sleuth) and legal series, Casey Cort.

A prequel rewinding to the early days of Casey while awaiting #4 Conflict of Interest, coming Oct 18.

When introduced to Casey, in #1 Qualified Immunity, (2014) she was in her thirties. An ambitious young Caucasian law student, with a promising career. She made the mistake crossing a classmate from a prominent and influential family (she told the truth).

She found herself blacklisted, jobless, no boyfriend, and rather than a successful law career she has worked so hard to attain—was left with hefty student loans, and an unfulfilled and poor struggling attorney working on a case by case basis as public defender, fighting a broken and injustice legal system, dealing with juvenile and family services.

Since this time, she has found herself on a rollercoaster ride with her career and personal life. (Good luck and bad, mostly bad). Life is never dull for Cort, the Cleveland attorney. She has had a string of bad clients, complex cases, corruption, sex trafficking, politics, and seems to always be in the middle of trouble. Tom seems to be in and out of her life like a revolving door.

Returning to 1996, Casey is in Cleveland, Ohio and in her last year of law school. She has waited for this day and also for her boyfriend, Tom Brody to pop the marriage proposal. She is sure there has to be some kind of family ring passed down through the generations of Brody’s. She could not wait for the dream job, the top tier white shoe firm like Morrell Gates. She already had the offer to start in the fall.

However, as Senior Editor for Law Review, she is faced with the law school’s code of ethics. Plagiarizing. The rules do not apply to the rich. She has to turn it over to the dean. She cannot publish something that is someone’s else’s work.

How was she going to explain why someone so privileged would bother stooping to plagiarism when he didn’t need to do it to graduate, or get a job, or achieve anything really? A moral dilemma. By coming forward, she will jeopardize her own future career. She can’t let them guilt her, for doing the right thing.

Now she is being summoned before the Law Review Board of Editors. She had been blindsided. She had done a great job for almost the last year. Plus, she has been hearing rumors about Tom, and now she stands to lose prestige and honor of having served as an officer on law review.

Her reputation was all she had but she knows if she wanted to be a Brody, her thoughts were best kept to herself. Of course, there is Judge Brody (future father in law), and Tom --she is so close to graduation. She stands to lose it all. Her job, her boyfriend, and her new job at the law firm. Her life had imploded. Blackballed

Maybe it is time to open the Law Offices of Casey Cort. After all who can fire her from her own firm? It is time to hang out her shingle. Who would have thought when she entered law school, she would become a sole practitioner in private practice? A Common Pleas Lawyers. Guardian ad Litem Juvenile Court. She has student loans, bills and a girl has to eat.

Casey reminds me of one of my favorite shows, The Guardian.(binge watch). Both find themselves in the middle of the most intense cases, mixed with humor and heart. The novella is perfect for Casey Cort legal fans as well as new readers with a nice intro into this fascinating series. Sylvie/Aimee definitely knows her way around the courtroom with lots of wit and drama.

Can’t wait for October 18. "Conflict of Interest" for the continuation of Casey and the last cliffhanger. Welcome Aimee, please keep the series going. (I want TV series or at least Prime). If you enjoy Janet Evanovich's Stephanie Plum, Casey Cort could be her sidekick on the law side.