Home With My Sisters 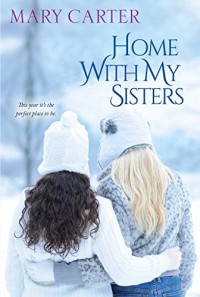 Mary Carter delivers some magical Christmas spirit with a "non-traditional" family--HOME WITH MY SISTERS —A heartwarming, twisty, quirky, and witty story of secrets, sisters, family, life, relationships, and mystery; with a modern day, “top-secret” holiday twist.

Yvette Garland is dying. Cancer. She wants to spend it with her granddaughters. The Garland sisters. Is to too much to ask to enjoy her last days on earth with her three beautiful granddaughters? She has not seen them since they were younger girls.

Her only son died around Christmas. (the girls' father). She lost her three grandchildren, too. She has not celebrated a Christmas since. She hates the tradition, but she is dying. It might be her last one.

Yvette told her young good looking neighbor, Austin Rhodes her last wish was to find her three granddaughters and bring them to her for one last Christmas. She would like to postpone her death until Easter, but she had no control over such things.

The three granddaughters-sisters: Faith, Hope, and Joy.Austin goes in search of the three sisters to bring them to his neighbor for her dying wish.

She believes (her son) is reaching out to her. She has to tell them the truth. She only has a photo taken in the middle of the summer even though they had staged the photo with a fake Christmas tree. The girl's mother had taken them away from their father, from her. Her daughter in law had destroyed their lives. The girls thought he was a drunk who abandoned them.

Presently Faith is 32, Hope 28, and Joy, 24. She made him a deal. If he would find the girls, there would be no Christmas. No tree, decorations, singing—she would not be spending her last days or weeks mired in a commercial mess.

If they follow her rules, she will leave the house to the three of them. What other strings does she have in store for them?

To the girl’s surprise, they did not even know they had a paternal grandmother and hopefully she would tell them where to find their father.

Faith was the older protective sister, a girly-girl all rolled into one. Hope felt safe around Faith and the baby sister they took care of. The girls were inseparable when they were young. The Three Musketeers. They grew up without their father. Their mother did not like their grandmother.

The girls went separate ways when they were older. Faith fled to California at seventeen. Hope had stuck around for Joy. Joy was the wilder one. However, as she got older she resisted Hope’s efforts to mother her. Joy ran off to Seattle the minute she turned eighteen. They stay in touch via social media and Facebook.

However, the girl’s father did not leave them as they thought according to their grandmother. He died in a car accident going after his girls, when his wife took off with them to Florida. They never knew. This is what their grandmother tells them.

Will Yvette make it to Christmas? Is she telling the girls the truth, or does she have her own agenda? Now the girls are stuck with their grandmother, using the house to force them all together. Granny had rules. So many unanswered questions.

The trip brings Mr. Jingles, Christmas hope, cheer, healing, self-discovery, secrets, wit, romance, new friends, family and surprises for the Garland Girls. This could be the "worst and best" of Christmases of their lives. Each sister has their own fears, desires, loves, and losses.

The joys of sisterhood:
“Older Sister: I make the rules.
(Like this one since I am the oldest).
Middle Sister: I’m the reason we have rules.
Younger Sister: The rules don’t apply to me."

Not your everyday Christmas story— similar to a holiday comedy movie with an edgy cast of colorful characters! From mental illness, suicide, racism, and lots of Xanax with flawed characters. It was a joy reading Mary Carter’s Christmas modern holiday novel. She writes funny and quirky mixed with warmhearted characters.

I head the privilege of reading one of the author's books several years ago and found it quite entertaining (she has such a wild imagination)! Since I do not read a lot of women’s fiction or romance (more thrillers, mystery, suspense), was not on my radar. However, when I saw this stunning front cover, and the author’s name-- was immediately drawn to it, and was delighted to snag an advanced reading copy!

Sisters, bonds, dysfunction, emotions, family, and their complex relationships. (with lots of heart). If you are looking for a "fun" contemporary holiday read (especially if you live in South Florida) like myself, where we live vicariously through winter books with snow-since we have palm trees and sun year-round (of course, I am not complaining). Put this one on your holiday list. Entertaining!