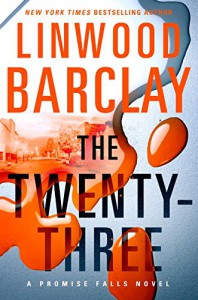 "Best Cliffhanger Mystery Thriller Suspense Series," landing on my Top 30 Books of 2015—with highly anticipated THE TWENTY-THREE a spine-chilling thriller conclusion Promise Falls Trilogy #3. (or is it)? Everything comes full circle.

Promise Falls is an explosive series about the disturbing evil secrets of a quiet yet mysterious small town (turns out, not so quiet). Love the cover!

Set in a fictional upstate New York small town outside of Albany, called Promise Falls—a town slowly dying, with a number of the businesses closing, or recently closed, and the younger generation, forced to move on to larger cities with better opportunities.

Presently murder, and a whole lot more. A serial killer is targeting their town.

A multi-layered plot, with an array of intriguing and well-developed characters, and a town of scandalous secrets, lies, conspiracy, murder, possibly revenge, and a list of crimes-and the mysterious number, "twenty-three".

There is also a backstory of Olivia Fisher, (#1) a young woman with a bright future, killed years ago in a brutal murder. Her mother died of cancer recently, and the dad remaining - still grieving, and left to control the fiancé, who has turned into a raging alcoholic.

How do the dots connect? Who has a motive for harming the people of Promise Falls?" Who is Mr. Twenty-Three?

Saturday, Memorial Day weekend, May 23 and we all know what happens with the number 23. It spells HORROR for Promise Falls. The motive for harming the people, points to the number 23.

It had all started with the horrific murder of Rosemary Gaynor. However, it really went back to the original: Olivia Fisher’s death- the first. Then most recently Lorraine Plummer. What do college students and women being murdered have to do with the other happenings? A serial killer is on the loose once again with his signature mark.

And then there were some strange goings-on around town. Everything from dead squirrels, and a Ferris wheel coming to life all on its own to a college predator and a flaming bus. As if all that weren’t enough, the bombed drive-in, and now someone was poisoning the water.

People are dying and even the lines at 911 were busy. Someone is poisoning the town’s water supply and possibly a multiple murderer—a serial killer. One in the same, or multiple people with different agendas?

What is the missing link? Promise Falls was already on the edge about a possible terrorist attack after the drive-in. However now things were getting out of hand. The town’s water supply is being tainted. A fuel spill, chemicals, or was someone intentionally seeking to harm?

Everyone was drinking the tap water and getting sick, and dying. Causing nausea, headache, vomiting, severe drop in blood pressure. To seizure, cardiorespiratory arrest and Hypo tension. By the time it is over, the number of dead is over two hundred, including those fatalities for the elderly, who died before they could even get them to the hospital.

In the meantime, Sam Worthington and Carl were missing. David Hartwell has to warn them about the water. Randall Finley, running for mayor is of course, trying to push his bottled water to gain attention for his campaign, while making more enemies and causing suspicions.

Who had a working knowledge of the town’s infrastructure?

Victims of crime the ones you do not hear about. What about relatives of perpetrators? The pain. Lives getting turned upside down and they are not responsible but get blamed. Shunned. How can they move on and start over? Who has a tormented past? A history of psychological abuse? Motive? Madness. Payback? An agenda. . .

Detective Barry Duckworth is front and center with #3. His detective work is brilliant; however, he may be in danger as he gets closer to the truth. Will he find the killer of the homicides and connect the dots, before it is too late, or will he die trying?

The sins of the past and present collide.

With an array of suspects, and clues --is there more than one killer, and how are they linked together? With more twists and turns than you can image, Barclay keeps readers glued to the pages of yet another riveting thriller. A mix of psychological, crime, cop procedures, forensics, mystery, suspense, wit, and humor----all rolled into one action-packed thriller!

Only Barclay, an pull out a shocker at 98% which is mind-blowing! One of my favorite authors. Just when you think, all the pieces of the puzzle are solved----BAM! Here comes another.

Let's see what Janet Evanovich can do for the "number 23" and favorite sleuth, Stephanie Plum in Turbo Twenty-Three(Nov 15) "a magical number" for November.