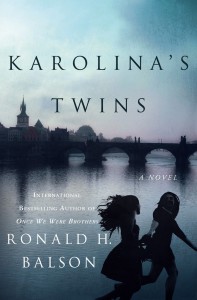 Ronald H. Balson delivers his third book in his riveting series,KAROLINA’S TWINS (Liam and Catherine #3) after the riveting Saving Sophie (2015) --catching up with Liam Taggart and his attorney wife, Catherine—for another complex and emotional case.

As the book opens, Chicago private eye, Liam Taggart and Catherine Lockhart-Taggart are contacted by Lena Woodward, a wealthy widow in her late eighties. Lena wants to find the twin daughters of her friend Karolina, who perished during the Holocaust. She had made a promise to a very special person and she intended to keep it.

She was born Lena Scheinman in the town of Chrzanow, Poland in 1924. She had come from a referral from Ben, which they were able to help. The children are Karolina’s twins. Her dearest friend. The woman who saved her life, but in the end, she could not save hers.

It was during World War II in Poland some seventy years ago. A burden she has carried. She had lost her friend, and cancer had taken her husband. Her two dearest friends. After their death, Lena had one purpose in life. She wants to use her money to fulfill her promise. Her promise to Karolina. She has to find the girls.

While Lena is sharing her story with Catherine, we learn about Lena’s life story which details surviving Nazi occupied Poland before, during and after WWII. There were a lot of ifs and a lot of unknowns.

She begins to recount a tale, going back to her harrowing past in Nazi-occupied Poland, of the bond she shared with her childhood friend Karolina. Is there a hidden story?

In the present, Catherine and Liam receive a phone call from Arthur, Lena’s son and warns them to stay away from his mother. He says she is nuts and there are no children. He says she is a senile, delusional old woman, wasting her money.

Catherine and Liam come to her defense stating she is not mentally impaired, and her narrative is well structured, organized, and details. Arthur seems to be more concerned with his mom’s money than her mental condition. And his sizable inheritance.

Had they found one another at last in 1941, to be separated again? The Natzis’ principle killing machine was attrition. Death by starvation, malnutrition, parasites, disease, and lack of medical care took dozens and in the winter they froze to death. From unsanitary living conditions, they areas were surrounded by disease and pestilence. A constant battle. So many people were forced to live in small areas, not just Jews from Chranow, but refugees from other towns.

From black markets and food becoming scarcer. The Nazis would shoot anyone found engaging in black market commerce. They confiscated their valuables. There were beatings. A horrible life though 1941. They did not know what was in store for them.

Karolina was pretty, and she knew how to flirt. She was a great listener and conversationalist. She had a protector. Giving food to Jews was strictly prohibited. Germans were forbidden from having relations with the Jews. Throughout Poland, young women were seized off the streets and forced to be prostitutes or sex slaves.

The winters were brutal. Karolina sacrificed for her. Her goodness and selflessness warmed her soul and because of her she survived. She had to repay her. The Nazis cruelty was beyond comprehension.

From Lena’s story -past to present, and Arthur’s allegation his mom is delusional. They need proof of the children to develop a factual defense. Arthur has a petition. This is where the story turns to a strong legal/historical fiction, a place where the author has proved he can handle both sides like a pro!

With surprises, twists and turns a compelling tale which grabs you from the first page to the last- a journey of survival and a connection to a dark past and the secrets of two twin girls. A moving tale of the strong bonds of friendship and motherhood.

KAROLINA’S TWINS is a well-written work of fiction; however, as the author notes, it was a story inspired by a woman of extraordinary courage, determination and wisdom.

With a mix of courtroom drama (well-drawn), an infusion of fact and fiction, well-researched historical events, and accounts of courageous survivors. As I have mentioned previously, attorneys make great authors (my favorites).

I enjoyed catching up with Catherine and Liam and their personal news. Highly recommend all the books in the series! Fans of Kristin Hannah’s The Nightingale, Martha Hall Kelly’s The Lilac Girls, and Peter Golden's Wherever There is Light, will delight.
Historical fiction netgalley arc Ronald H Balson 2016 new releases books read in 2016
Source: http://www.judithdcollinsconsulting.com/#!Karolinas-Twins/cmoa/577194d50cf2e26a9984478e