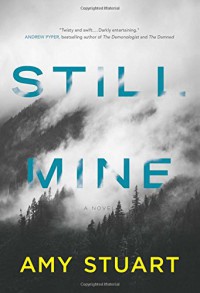 A special thank you to Edelweiss and Touchstone for an ARC in exchange for an honest review.

A smashing debut, Canadian Amy Stewart delivers STILL MINE - From drug addiction to spousal abuse, an old mine, hidden painful pasts, and dark secrets. An atmospheric, stark, isolated setting in the rural mountains, a strange tight-knit community, and a ruthless, fictional town of Blackmore.

From regrets, grit, intrigue, and suspense, and a cast of colorful, seedy, and eccentric mysterious characters; readers will be glued to the pages to uncover the mystery of two girls with similar pasts.

A small town is a great place to escape, to become hidden, until everyone knows the details of your life, which can be great until you’re up to no good.

"Blackmore is both strange and utterly familiar to Clare."

Shayna Cunningham Fowles, age 29 addicted. Missing for two weeks. She wanted to be a writer. Her mom says she wrote poetry. Some say she popped some pills and wandered off a cliff, where folks go to party. Some say she was high when she went missing. A junkie. Her family is looking for her, but not her husband.

Clare O’Dey, is running from an abusive husband, Jason. Until six months earlier, Clare had never ventured more than a few hours beyond her hometown. Until she began working for Malcolm Boon. Jason is still a threat. Can she ever truly escape him?

She is driving northwest into the mountains of Blackmore with a population of 2500. Now she has to muster the nerve to introduce herself to strangers. Not her true name. O’Dey means “of a servant”, “of a maid”. She is pretending to be a photographer. Not a cop, investigator, or a reporter.

A blast at Blackmore Coal Mine five years earlier killed thirty-two men and trapped eighteen others underground for over three weeks. There was no happy ending. At the time she recalled the story but people ignored other’s misfortunes. Only concerned of their own problems.

The two women are roughly the same age, and the same hair color. There is a sharp resemblance. Do they have more than outward appearances in common? What do their mom's have in common? Husbands?

Mysterious Malcolm Boon hired her to go to Blackmore to see what she can find. He was the answer in order to get her out of town. He is a stranger too. Does she trust him? Is he protective, or manipulative. A good partnership, or bad?

The town does not like strangers turning up with prying unwelcome eyes. One woman in town has gone missing and now another turning up out of nowhere—a stranger in their midst.

From a motel to the diner, she learns of a trailer for rent, Charlie Merritt-the town drug dealer. He lost his family in the mine-father and brothers. His mother swallowed a loaded rifle a week later. He is on a rampage. He is supposedly supplying junkies and kids.

He thinks Wilfred (foreman) killed his family and he needs for him to pay. The trailer is in the middle of the woods, next to the Cunninghams. (Shayna’s family). Bingo, a stroke of luck-a perfect place to learn more.

Clare finds herself in another small town, the dread, the sense of abandon, of nothing to lose. She feels her past bubbling up again. Who knows what sort of people live here, and the impending danger she may face.

These are the type of people here who refuse to leave a dying town. Devoid of hope. The kind who disappear. Her husband might think her dead, or lost, rather than running.

Is Shayna dead? Sometimes people vanish for good reason, leaving an entire life behind to escape just one part of it. Clare can feel Shayna’s story weaving into her thoughts, however it varies from hers.

As Clare learns more about Shayna and the events in her past that might have contributed to her disappearance, she realizes the harm in not learning from her own mistakes.Clare doesn’t want to fall victim to the same fate.

Shayna’s mother Louise has gone batty-in the early throes of dementia. The family worried about their daughter after she married Jared. He was described as a landscaper, a former miner, a flirt, a man arrested twice for drunk driving. Does he care that his wife was gone? Wilfred Cunningham, a coal mine foreman—the father is still searching.

If Clare is to solve the riddle of the missing girl, she will have to seek out Shayna’s friends and family one by one, an outsider looking for a way in. However, in the process she may put herself in danger and draw attention to herself. Possibly Shayna had her reasons for leaving-like herself. Maybe she does not want to be found, like Clare. This case will hit close to home.

She knows that Charlie hates Wilfred; Wilfred hates him back; Louise is suffering from dementia or out of her with grief. Doctor Derek, clean cut and proper; Jared, the ex-husband, and Sara a few friend who might be of use. Which one is capable of murder?

"Is there a core in each of us that can never be changed?Separating the good from the bad."

The ongoing mystery: Who is enigmatic Malcolm, and why did he send Clare to this town to find Shayna? They meet in person only, or an encrypted antique phone. He was the unlikeliest of employers directing her from the sidelines. Malcolm held the most intrigue, and how his piece of the puzzle will connect.

Everyone is hiding something!

In the process of searching for Shayna, Clare must confront her own demons as Stuart slowly reveals the truths, lies, traumas, and the demons. What is she running from? Will her past catch up with her? Regrets. Can one decision alter, a life?

STILL MINE is a gripping page-turner, with an atmospheric creepy setting, with a “rural noir” Gothic type feel. The mystery and suspense is slow burning, yet at the same time it is fast-paced. With twists and turns, there is tension and intensity, and a darkness lurking, making you aware something will soon be revealed.

Readers will “get” the brilliantly crafted "double meaning" by the time they reach the final conclusion – A thought-provoking fitting title and cover!

Stuart’s writing style is excellent, drawing you into the labyrinth of lies, making you question each character, their past, and their motives. The characters are compelling, and the author delves into the depths of pain, grief, blame, complexities, their past, and horror of addictions and abuse.

How does each character approach the present, based on their own past?

This talented Canadian author will be assured to set the thriller "rural noir" psychological suspense genre on fire. The ending is left, so as possibly a sequel. I for one, am hoping for a continuation of Malcom, Clare, Jason. There is still much more to explore! Can’t wait for the next adventure.

An excellent choice and ideal pick for book clubs! The author includes a very detailed reading group guide and some great discussion questions. There is much depth here beyond the surface, if you look closer and analyze the similarities you will find an array of hidden meanings and metaphors. An author to follow!

Do we have another up and coming "Linwood Barclay" on the horizon? Hope so, one of my favorites!

* * * * *
On a personal note: Even though I read the book months ago, was called home the end of July, due to my mom’s illness- to her demise, funeral, and estate logistics. Thanks to my GR pals for your many condolences. Will be be flying home to Florida the first of Sept. My Aug. reading and reviews were put on hold this month; so playing a bit of catch up. Looking forward to diving back in.