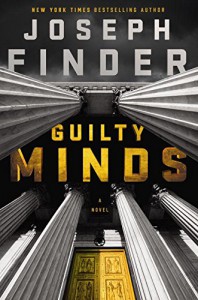 By: Joseph Finder
Nick Heller #3
ISBN: 9780525954620
Publisher:  Penguin
Publication Date: 7/19/2016
Format:  Hardcover
My Rating:  5 Stars
A special thank you to PENGUIN GROUP Dutton and NetGalley for an ARC in exchange for an honest review. Stunning Cover!

Nick Heller’s job is nothing more than figuring out who’s lying and why, and to catch them at it. He has a knack for detecting lies. Lies are his business. White lies are the grease that keeps the social engines running.

But lies—real lies are the source of all trouble. He specializes in digging up secrets that powerful people would rather keep hidden. Nick Heller is tough, smart, and cultured.

“Born into great wealth–his father, the odious Victor Heller, was the Dark Prince of Wall Street–and then lived in poverty after his father was imprisoned for securities fraud. He is equally comfortable around rich people as well as blue collar. He knows the world of high finance. He went to Yale and worked for a few summers at McKinsey, the consulting firm, but then he rebelled by doing the unthinkable—dropping out and enlisting in the army, where he did a few tours in the Special Forces in Iraq and Afghanistan and other places, and then went into intelligence work for the Defense Department.”


He does the same sort of stuff he used to do for the government, only for the private sector — individuals, politicians, corporations.

“A lie gets halfway around the world before truth has the chance to put its pants on.”

Slander Sheet is about the publish an expose about Supreme Court Chief Justice’s Jerry Claflin’s relationship with a call girl.

An escort service, Lily Schuyler. They offered the most beautiful, exquisite, and sensual young ladies ever to work in the escort industry. All the girls were ladies and all potential clients were gentlemen.

He has never heard of the name (Kayla Pitts) Heidi L’Amour (five diamonds). He was supposedly given three nights with the hooker by a casino mogul in whose favor he had ruled in a recent case.

An alibi? Electroshock therapy at an inpatient mental health clinic. Depression. He was allegedly seeing a call girl during the same time he was being treated at Sibley. A set up? One of the finest hotels in DC, only a few blocks from the White House.

Nick Heller has 48 hours to discredit the allegation. Who is the power and money behind Slander Sheet?

Things get complicated. Pitts is found dead, an apparent suicide. Who murdered Kayla? Did the defendant intend to commit the crime? Literally, guilty mind.” Who is trying to destroy him? Who benefits?

It doesn’t get any better!

Finder pulls out all the stops with his latest adventure. One of my favorite action thriller authors, whether a standalone or series, Finder, first-class with his research and the latest trends –from plot, pacing, twists, to unforgettable characters. If you have read Finder’s bio you will learn he always wanted to be a spy.

Joseph, you are truly a spy! You were meant to write spy novels. You have to be a spy at heart in order to deliver a convincing dynamic series.

One of the most important aspects of spying is collecting relevant information, which is why it is often referred to as intelligence. To write good spy suspense, takes the same skill set, plus more. You get to create your own characters, scandals, settings, and your superb endings. What could be better?

PS. A rock star with execution, wit, innovation, and non-stop action; top of this genre.

Often I am asked as a female reader why I love spy thrillers? They are edgy, intriguing, sophisticated, contemporary, mysterious, sexy, intelligent, action-filled and dangerous! A fan of political thrillers, crime, mystery, and modern detective techniques = Guilty Minds!

Read more Between the Lines: Joseph Finder “Building the Perfect Hero.” Learn more about Nick and his background by reading the previous books in the series.

Highly Recommend the series as well as his famous standalones!