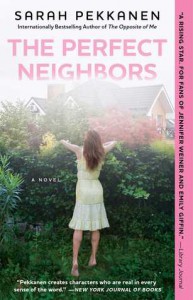 An avid fan of the "queen of chick-lit with grit" Sarah Pekkanen, returns following (2015) Things You Won’t Say with another edge-of-your seat domestic suspense THE PERFECT NEIGHBORS with a mix of contemporary, suburban chick-noir, (dark side) mystery, lots of wit, wine, whine, scandal and intrigue. A Sure-Fire Hit!

A modern twist of Wisteria Lane’s Desperate Housewives and Peyton Place, sprinkled with hilarious updates from Newport Cove Listserv Digest social media commentary! Everyone is trying to be the picture-perfect family. Halloween is a theme. Masking the real person. Telling yourself stories about people. Superficial details. Underneath - struggles and flaws.

How far will you go to protect those you love? Do you really know your neighbors, and those who interact with your children?

Welcome to Newport Cove, Parenting Magazine touts as one of the “20 Safest Communities” in the US. A peaceful, serene, and bucolic suburban neighborhood, where anyone would love to raise their family. From new McMansions, to original Tudors, Colonials, and Craftsmans, with street names of flowers.

Tessa and Harry Campbell: They are the newest addition to the neighborhood. The most intriguing and mysterious, especially Tessa. Everyone wants to know their story. Moving to escape a past, bad memories. Very private. Protective of children. Husband a software developer and travels often. They have a secret. An ongoing mystery. None of the neighbors know. Children: Daughter, Bree, nine. Son, Addison seven.

Susan Barrett: Most impressive, outward appearances. Superwoman. Divorced. A perfectionist. A business woman. Owner of “Your Other Daughter”. Speaker, radio show. Business franchised into four states. Type A personality. Helps the elderly. Bakes. Loves to cook. Perfectionist. Ideal mother. She has regrets about her marriage. Ex-Husband, Randall is remarrying. She stalks them. His girlfriend (her former friend-Daphne). Obsession. Inside she is broken. She is drawn to her clients which have broken lives. She fixes others. Attempting to try and date again. Son: Cole. She has secrets.

Kellie and Jason: She married her high school sweetheart and has never been with another man. Her husband works with his family’s local Scott & Son Hardware Store. Close with the in-laws. She was a stay-at-home mom, and has now joined the work force. A real estate agent, now wearing heels, showing homes, and taking notice of her married broker, Miller Thompson. A dangerous attraction. She is getting attention. She is not looking at her husband like she does hotty Miller. Secret texts and flirts. Dangerous territory. From new clothes to secret lust. She has secrets. Children: Mia and Noah

Gigi and Joe Kennedy: Joe is running for Congress plus working for an environmental company. High stress. Gigi likes to smoke pot. Zumba, Pilates, and a former activist. Likes alcohol. A bit of a Bohemian style. A wild past. Rebellious. Things she does not want uncovered. Struggling with media, lack of privacy, the campaign, scrutinized, and currently having issues with their 15 yr. old teen daughter, Melanie. Their 12 yr. old daughter, Julia was usually cooperative. Also dealing with Joe’s campaign manager, Zach who moves in downstairs. She has secrets.

The women are close friends and love to get together for Whine and Wine night. The newest addition is Tessa, and they think she is a little standoffish. They are dying to get her drunk, so she will spill. The community manager Sharon sometimes joins them.

Readers get tidbits of Tessa “before Newport Cove” mixed in with the sections from each woman. Pekkanen keeps readers in the dark, handing out clues as we move along with a series of events surrounding Tessa and her mysterious past. Tessa is the most mysterious, and my favorite character!

“You couldn’t outrun your past. It was like sprinting on a treadmill—as soon as your legs faltered, you’d discover you were in the precise place you’d, been trying so hard to escape.”

“Moving to Newport Cove was nothing more than putting on a Halloween costume. Tessa had been swept up in the imagining, in the pretending to be someone else. But once the disguise was off, you no longer fooled anyone, least of all yourself.”

“Tessa and Joe had opposite agendas. His was to stand out in people’s memories, to make an impression. Hers was the opposite: To blend in. To not be noticed. They were both campaigning.”

From the mystery dog pooper, mechanics, warnings, dry cleaning, mail, used cars, parties, headless Barbie, politics, complaints, (loved the Turbo Tax comment and unsubscribe). Bet the author had a blast writing this book. You will laugh out loud—witty, and humorous, and oh, so realistic!

Loads of humor and razor-sharp insights will keep you turning pages into the night. Pekkanan fans will devour! Each of the women- desperately working through their domestic struggles and family life, while facing the secrets, crimes and mysteries hidden behind their doors. On the surface a perfect suburban idyllic neighborhood.

Pekkanen once again delivers a winner! Not sure I have ever had to this happen-when looking back over the ten previous books I have read by Sarah- each one is a 5 Star! How many authors can write ten books and each be top rated? I knew she was a rock star, the first book I read back in 2010.

From fears and anxieties of women, motherhood, marriage, and crossing over to the dark side with a bit of mystery, suspense, and impending danger. The idea that you can never really know your husband, partner, parent or neighbor- intriguing!

Fans of Paula Treick DeBoard’s The Drowning Girls (2016) will love the idyllic prestigious community and the scandalous secrets of the neighbors as well as Liane Moriarty’s Big Little Lies (2014).

This would be a great movie! Or a DH remix comeback. While reading, I continued to imagine which Desperate Housewives’ (2004-2012) character related to each of the women in THE PERFECT NEIGHBORS. I had to double up, since DH sometimes had five women and we have four. Here is my take:

(Brenda Lee Strong-Mary Alice Young) DH narrator, would have a field day with Tessa’s character and her haunting past.

Anyone want to weigh in with their vote? Would love to hear more.

Note for publisher: PS. When it is time for the reprint, please put a dog on the cover somewhere. The dog poop commentary is priceless (a trademark)! I almost want to see an upscale gated community entrance with immaculate landscaping and a dog pooping in the corner.

You MUST read this one to find out Tessa's secret! Loved it. I hope we hear more from these colorful characters.