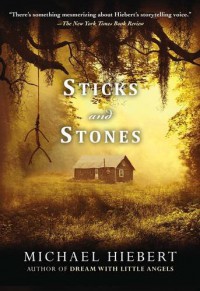 A special thank you to Kensington and NetGalley for an ARC in exchange for an honest review. Nice cover.

A fan of the Michael Hiebert’s southern series (have read them all), he returns following (2015) A Thorn Among the Lilies(Detective Leah Teal series #3) with #4 in the series STICKS AND STONES –From beauty to brutality; A Southern Gothic psychological crime suspense. A serial killer. A new case, similar to a fifteen-year-old case of Leah’s then, Detective father.

Raising all sorts of questions: Was the wrong man shot, a copycat, or someone on the inside gone bad? Why has the killer been sitting dormant all these years?

Picking up from earlier books, set in the small rural town of Alvin, Alabama, (pop. 6,000) police officer Leah Teal, daughter of Joe Fowler, a former detective back in 1974. Joe was involved in an intense case tagged by the media as "Stickman."

The brutal case involved wooden staves hammered through chest, and pieces of paper affixed to the stave, a drawing of a stickman made in black permanent market.

Victims ranged from mid- twenties to early forties, both men and women. Every killing brought in more cops and a task force. The case was long and arduous with nine in total. Harry Stork, The Stickman. Joe Fowler gave his life. Leah’s dad killed him. It lasted from Feb, 1973-July 22, 1974.

He made sure, his daughter Leah would follow in his footsteps. She needed to be able to take care of her family.

Now fifteen years later, it is 1989 --Leah is a single mom. Her husband Billy was killed years ago in an automobile accident. She is now dating Dan Truitt, a Detective from nearby Birmingham.

Detective Leah Teal is the only detective in the town of Alvin and raising two children, we met from earlier books. Abe (love him), age thirteen, and daughter, Caroline, age sixteen. They always become involved in the cases. Also, we get to catch up with Abe’s partner in crime and best friend, Dewey. The adventure always unfolds with this duo: Tom Sawyer and Huck Finn.

Now, she receives the news Stickman Strikes again. Her pa shot him through the heart. How could this be? The killings stopped, so now why start again fifteen years later? He is dead.

Unless there is a copycat, or someone related. OR worst still, did her dad kill the wrong man? Why would a copycat start fifteen years later? The dead do not come back. Now everyone is panicked. The murders have started and now she is the one receiving the letters, like her dad received. Prior to finding the victims. Warning: A storm is approaching

What is the truth? She recalled the details when her dad was involved. It has to be someone who knew his MO and his signature. They knew to send the letter ahead of time. Leah cannot accept her father made a mistake. His legacy. The Stickman had to be someone else. Maybe it took fifteen years to find a new partner.

A serial killer is on the loose. Through cop procedures and forensics, we meet a colorful cast of characters and suspects. From a twin brother Tommy and a pa named Noah. There was also an honorable discharge due to psychological trauma and his own medical waste management company. Following clues, schizophrenia, psych wards, a suicide, Jonathan, plus more crazy names: Stickman, Stranger, Duck, Buzzman, plus more.

In between trying to keep everyone safe from the killer, trying to solve the crime mystery, Teah is also juggling two teens, which is no easy task and a boyfriend who drinks too much. What about Dan’s dark monsters. Why does he drink so much?

From tragedy and the road to healing. Life's torrential storms. Protection for those things, and people we hold so precious to our hearts. I really enjoyed the first two books in the series; however, the latest two additions, are not quite as engaging or lyrical, as the series started. The first two seemed to be more emotional and gripping, and always enjoy the humor from the kids, mixed with the forensics.

A few notations: Hopefully if there is another installment, we can get some of original groove back. I enjoyed more of the, coming-of-age tales with Abe and Dewey’s character taking the lead, which adds a nice balance. Also, Leah seemed to be a bit disconnected. Some of the Southern flair was missing which was apparent in the earlier books in the series. Recommend reading the first, and working your way through the series.

Hiebert is a talented writer, however, want to see more of the earlier, bold, literary storytelling style -(more than the heavy cop procedures). Complex, psychological, heart-wrenching effects on the human psyche, as: Wiley Cash, David Joy, and John Hart true Southern Grit/Gothic. Of course, we know Hiebert is not from the South, as these mentions.