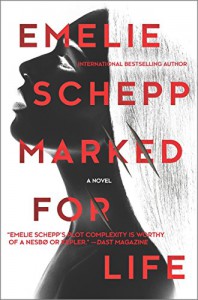 Swedish author, Emelie Schepp delivers her US debut,MARKED FOR LIFE, the first in the crime trilogy, (Jana Berzelius #1).

A prosecutor leading a high-profile investigation- for a dark chilling multi-layered twisty plot leading into a human-trafficking operation, and the protagonist’s own intriguing mysterious personal past.

Both subtle and grisly, a delicious Nordic noir. The author delivers complexity and inner turmoil, exemplified by Jana’s character and the bone-chilling Scandinavian setting.

Public prosecutor Jana Berzelius grew up in a household where emotions were kept at a distance. With a retired prosecutor father, who would never congratulate his daughter on a successful court case. Jana was accustomed to his taciturnity.

Even her mother Margaretha, who was warm and loving during her childhood, seemed to prefer to clean the house rather than play games with her. At age thirty she treated her parents with the same unemotional respect with which they had raised her.

Jana is called by her superior to assist on an investigation. A woman had been detailed after she called the police to report finding her husband Hans Juhlén dead. The official in charge of migration asylum issues in Norrkoping. Shot. Murdered. Age fifty-nine. They had been married since age eighteen. The wife says she did not killer her husband, only found him. Forensic experts say the murder took place in the home.

Mia Bolander (rivals) was not thrilled to be working with Jana (the one with no personality, stiff, formal, arrogant diva upperclass girl. Jana was old money, while Mia with her working-class background was mortgaged. Now working on the case Henrick Levin, Mia, and Jana.

From clues of threatening letters, messages, cash, and fingerprints belonging to a child whose body turns up a few days later. The couple did not have children.

His work had made him vulnerable. The decision process for asylum was difficult and he did not like turning seekers away. People were desperate and not everyone qualified. Threats, revenge, blackmail? Had he gotten to close?

During the case, we receive flashbacks from Jana's childhood. Strange dreams she had been experiencing- like nightmares. Was the case bringing back repressed memories? Her scar. Adopted. Four letters. Six numbers. Shipping containers. Innocent children.

A girl, a boy, and a woman. A mission. A boy is found. A scar. Child trafficking. A Mirror. Who is looking for the lost children?

Her own dark past? Carving by a child’s hand. Letters carved in the skin. A stolen childhood, murdered parents.

To protect her own hidden past, Jana must find the suspect behind these murders, before the police does. She had been told she had fallen down onto a rail track in the underground and hit her head so hard she lost her memory.

Jana Berzelius has not told anyone that she woke up at a hospital without any memories when she was nine years old.

Memories or fantasies? Images and fragments through dreams. She has to know who she really is, while searching for the truth of the boy.

“From a crushed child you can carve out a deadly weapon. A soldier without any feelings, without anything to lose, is the most dangerous there is.”

The Scandinavian crime fiction or Nordic noir, is compelling --from dark secrets and hidden hatreds.

Comprising crime fiction with common characteristics, of cop procedures, an engrossing mystery, suspense and forensics, the author explores the dark, morally complex mood, of Jana. Her identity- delving into her own childhood, making the intensity high and personal. Fascinating, and unique. Staying one step ahead of the police.

Marked For Life is an intriguing beginning to the dark, enigmatic and absorbing Jana Berzelius trilogy. Looking forward to the next!