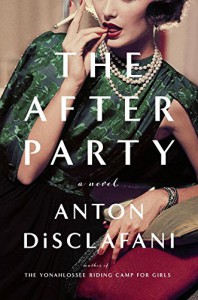 Anton DiSclafani returns following The Yonahlossee Riding Camp for Girls with her latest, THE AFTER PARTY - a world of glitz, power, glamour, privilege, and wealth in 20th century Houston—from past to present, a story of shifting identity, secrets, obsession, and at the heart –a timeless female friendship.

Set in the 1950s, in Houston’s River Oaks neighborhood (one of the wealthiest in the country), The After Party is centered around Texas socialites, frequenting the Shamrock Hotel’s Cork Club, Houston, Texas.

We meet two leading women, best friends as very young girls and growing into a complex relationship: CeCe Buchanan and Joan Fortier. Both with names “Joan”, until CeCe began using her middle name. Each taking a different path.

CeCe grew up wanting nothing more than a family, a stable marriage, a nice home and attend parties at the Shamrock Hotel (Cork Club), where the elite gathered in their finest (Think Gatsby). Nice touch with the "green" on the cover, to coincide with many shades of green for the famous hotel décor, and ongoing theme of money throughout the book. River Oaks was the place to be. Joan thought otherwise.

From past to present we flash to 1957 CeCe as an adult, married to Ray, with three-year-old son, Tommy. To the single, wild, rebellious, and free self-destructive, Joan. Told from CeCe’s point of view.

From 1937, a young girl, CeCe has always been in awe of Joan, starting as early as kindergarten. Joan had the looks, charm, and wealth. Boys flocked to her. Enigmatic.

After CeCe’s critical mom dies, while she is in high school, CeCe moves in with the Fortiers for a few years. Cece only wants to remain in the town, marry, and be a mother. She is looking for stability; something, she never had growing up, and craves it. She cannot imagine anyone desiring anything different. CeCe, a loyal subservient friend.

Joan is the complete opposite. “Houston’s most famous socialite.” Tall, blonde, bold, wild, and gorgeous. She is out for herself. She uses her looks and money to be as daring and provocative—she seeks independence; however, always relying on others to pay her way. Joan always wants something different. Rebellious. Visions of Hollywood? What would take her away from her controlling parents? She wants New York or a larger city. To spread her wings.

In Joan’s senior year of high school something changed. She left and moved away without any warning. CeCe was heartbroken, and never stopped worrying about her best friend. CeCe was always there to clean up Joan’s messes (there were plenty)! She was never envious or jealous, she liked Joan getting the attention.

However, CeCe's obsession, carried over through her married life. Joan was always at the top of her mind. She was determined to help her reckless friend find her way back.Why did she disappear without a word?

Mysteriously, Joan returns a year later. She is different. She is wilder than before. Sleeping around with multiple partners, drugs, alcohol, making scenes at social functions—Self-destruction. She did not care or give a thought to what others thought. CeCe does not understand Joan’s behavior.

What lurks behind this no care attitude and tough façade? What is she hiding? CeCe is determined to find answers to her friend’s secret. Joan continues to spiral downward with her scandalous behavior.

In the meantime, CeCe is trying to hold on to her marriage and family, with husband who wants more children, and torn with worry over her friend. Her obsession with Joan’s happiness clouds her own world. DiSclafani, slowly unravels the mystery of Joan, the secret ---a complex woman in the eyes of CeCe, and how the news will affect her.

From burdens we carry, and burdens we place on others, the power and perils of female sexuality. In a time when women had little identity. They were to marry, be the wife and mother. Joan wanted to break free; however, she relied on her parent’s money or a man to break away, versus making her own way. However, she was met with obstacles which changed the course of her life. Joan has her own secret. A part CeCe is kept in the dark.

CeCe also had her own regrets and Joan was always a part of it. There was an act between them in high school, and this is something which will always bond them. A dark secret. CeCe feels an overwhelming need to protect Joan, no matter the consequences. An eighteen-year-old girl; when a girl stops being a child.

Choices, heartbreak, chances, regrets, secrets, failing to live up, or be enough. From motherhood, strong bonds of friendship, and self, which carries you through the most turbulent times. Does your life experiences define you? Guarding your heart, putting up walls. A perfect example of how people can judge, when they do not know the individual person’s road traveled. Not all people want the same things.

I listened to the audio version and Dorothy Dillingham Bluedelivered an outstanding performance. Some of her sex scenes were hilarious, and found myself laughing out loud while running errands.

Entertaining and absorbing, a look at sexuality and struggles of women in this era; nice research. An exploration into the intricacies and emotions of friendship, society, and family pressures. From two extremes: Motherhood the traditional way, and the bold society rebellious roaring 50’s.

Looking forward to reading more from the author! I enjoyed reading about the inspiration (River Oaks) behind After the Party. I am always intrigued, further enhancing the overall reader experience. I must be on a kick, reading historic fiction of the glamour years- My third in a row!