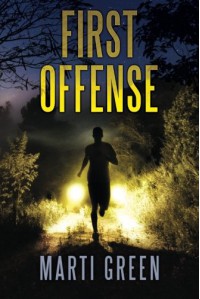 Marti Green returns following The Price of Justice (2015), with FIRST OFFENSE (#4), a continuation of her riveting series, (HIPP) Help Innocent Prisoners Project—highly charged topics, of abuse, corruption, bribery, racketeering, and extortion of the private juvenile justice system—and those caught in the crossfires of an unjust system. Haunting and terrifying for parents, as well as the young adult victims.

Frankie Bishop, age twelve, idolized his father, Alex. When he was deployed, (army) Frankie seemed lost without him. An interracial family, now they were living off-base for the first time in years in a new city, new school and new challenges. His mother Jessica was afraid his father may not come home this time around. She decided to move them to Key Vista Florida, on the Gulf Coast, near her mother. Alex is MIA.

Frankie, becomes angry, at his father being MIA, at his mother for moving them to a new town, and at his brother, Bobby for leaving them the previous month to join the Marines. He was an outsider at his school. Four moves in seven years since he was old enough to start kindergarten.

He was a model straight A student and wants to be a doctor. However, due to wanting to fit in and peer pressure, there was drugs, the police were called. He could not tell the police where he found the marijuana. His brother Bobby would be kicked out of the service. Bobby had always been in trouble and never Frankie. He just wanted to be accepted. He did not use drugs, nor would he sell it.

He was sent to a detention center. He needs an attorney. The mother calls Bruce Kantor (at HIPP), her brother-in-law, and he was too close to the situation--they needed a good attorney who’s was in the juvenile court all the time. Frankie had brought marijuana to school in hopes of winning a friend. Bruce turns to his associate Dani for help.

Dani Trumball, HIPP lawyer, wife, and mom, has her own problems. She is concerned she is pregnant. She and Doug had Jonah fourteen years earlier. He was diagnosed with Williams syndrome, a disorder that caused cognitive difficulties, and they had decided they need to focus on him. She had recently gone back to work while Jonah was in school. Like many children with this syndrome, he had demonstrated very early extraordinary musical talent. A baby—not what they planned at age forty-five and husband forty-seven. She had struggled in the past with her conflict between working and being a mother. Yet he still managed to thrive. She knows she wants to do it again.

She is on the case to help her associate, and a family devastated—a son sentenced to juvenile detention at Eldridge Academy. Dani and her favorite investigator at HIPP, Tommy Noorland—fly to Tampa and drove to Key Visa, a small community near the Gulf where Jessica and her son lived. What she found astounded her. Why would a first offender, be sent to a detention center?

Something seems off. After further investigation, there were all sorts of horrific abusive behavior to these boys from the guards. They were threatened and beaten, and one boy was found dead. Things were serious. If a guard would commit murder, how could they protect this boy? A juvenile prison, with a name making it sound like an elite private school. Why were hundreds of boys sentenced to this facility, when it did not warrant the seriousness of the crime.

They track down leads. However, now he is gone. No one has any answers. What had they done to him? They began checking hospitals. They tracked him down at a nearby hospital—internal bleeding and a ruptured spleen, broken ribs and bruising. He had been at Eldridge Academy for two months. He had seen plenty, punched, kicked, handcuffed, beaten, they all made sure it was done out of sight of the security cameras.

Frankie is torn. He knew he could not go back. He could not return to his mother—that would be the first place they would look. His only hope was getting to his brother somehow at Camp Lejeune, in Jacksonville, North Carolina---his brother Bobby would know what to do. He leaves and is on the run. He knows he cannot go back to prison, they will kill him due to telling about the death of the boy.

He meets a nice couple in Savannah, and there is a plan. If he had followed their plan to the letter, he would have made it to his brother. However, he then meets another man, along his journey, who steers him wrong. A man sees a boy traveling alone. Frankie trusts the wrong person. Now he finds himself in even more trouble than ever before. How will he escape this time? Bigger trouble than he’d ever face. A betrayal. Little does he know the man is part of an illegal sex-trafficking ring.

Jessica, the mom is frantic. If Frankie ran from the hospital, it had to be because he didn’t believe they would protect him from another beating or worse. No one was protecting Frankie and these boys.

Dani and Jessica are both afraid—the thoughts of children sent to juvenile facilities in order to help them, to provide services to turn their lives around and once there, cruelty, heartlessly abused. There has to be some sort of conspiracy between the warden, owners of the facility and the legal system. Why, and the motive?

Who was protecting them and where was the community outrage? Where were the government overseers? Frankie’s mom nor she would accept it. The kids are threatened if they report the incidents, and she has to keep digging. Nothing more she can do until she finds Frankie.

The FBI is called in, and a race against time. Each time they think they have a lead, Frankie is being shifted to another person or place—which looks like sex slavery and sex trafficking. Predators and monsters who broker innocent children for money.

Dani is outraged --how many children languish in prison where the profit motive outweighed compassion. She had encountered many awful people in her years, both as a prosecutor and a HIPP attorney, but never had she been as disgusted as she was by this sad excuse for a man….one who saw children only as dollar signs, a means to personal wealth, due to greed. Big business- goal was making money, not rehabilitating kids. Will they find the answers in time to save Frankie and the others?

A great exploration, research, and insights into the private, for profit juvenile prisons—from the reported abuses, the disturbing motives, sex trafficking, and the operators, even though fictional—based on real cases which have occurred in the juvenile prisons throughout the US.

Having read all the books in the HIPP series (highly recommend), always enjoy the challenges of the legal system, as well as Dani, Bruce, and the team—tenacious, protecting those who cannot help themselves. Each case brings on new controversial topics, timely and even though fictional, they could be ripped from today’s headlines. A nice balance of personal and professional.

I enjoy the Florida settings, as well as the legal expertise of the author’s which makes for an absorbing and engaging read. Those enjoying good legal suspense and crime cop procedures will be glued to the pages. Fans of Sylvie Fox's Casey Cort legal series will relate to the similar topics.