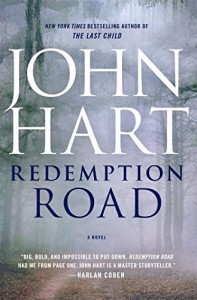 EXTRAORDINARY! "Big Screen" Worthy. One of my favorite Southern authors, John Hart returns with his most complex novel, and "Best Yet"!

REDEMPTION ROAD —a literary, suspense crime mystery and Southern Gothic thriller-assured to be another bestseller! The most anticipated book of the year-well worth the wait, and all the hype. Top Books of 2016.

Elizabeth Frances Black, (Liz) a North Carolina (white) female police detective, is facing criminal charges for gunning down two black men who were sexually abusing and tormenting 18-year-old Channing Shore. They were shot eighteen times after being trapped in a dark nasty basement.

To those with children she was a hero. For those who distrusted the police, she was proof of all that was wrong with authority. Some would call it brutality. Two men died in a violent brutal manner. They were rapists and kidnappers. The media was calling her a hero cop, or angel of death.

Channing was alive, but now damaged. Liz can relate. Wiring her wrists and raping her repeatedly, planning on killing her. Channing’s father is rich and white and the men were poor and black. The people wanted an indictment. Channing only wants to talk to Liz and cannot relate to anyone else.

Elizabeth lost the kind of trust most girls should have when she was seventeen, with her own devastation. Her dad, the preacher would of course blame her. He could not accept the life she had chosen. All she had ever wanted was to be a cop- because cops didn’t fear the things normal people feared. They were strong. They had authority and purpose. They were the good guys. Now she was unsure she believed this.

Gideon Strange’s mother, Julia was murdered thirteen years ago. His father is sad, broken, weak, drunk, and helpless. At fourteen, he had to be man enough to pull the trigger, when his dad could not. It had been thirteen years since his mother’s murder and three weeks since he had found his father’s gun, and then more days since he had figured out a train would carry him to the prison on the far side of the county. His mother was dead, and the killer needed to pay.

Adrian Wall, is a cop Liz once had feelings for. He was a rock star cop—he had caught all the big cases, made the big arrests. He was a hero. Until. He had lost it all. His home, family, land, his career, and his life. Prison, for a crime he may not have committed.

Liz was younger when Adrian was convicted. Something was not right. She was shut down when she attempted to push the issue back thirteen years ago, when she was just a rookie cop. He was tried and convicted for murdering Julia Strange. Now he is getting out of prison. She is sure he was innocent, despite compelling forensic evidence. Even his partner testified against him. Hero cop murders young mother.

Adrian had suffered through knives, needles, torture, darkness, hunger, psychological and physical abuse while in prison. From ambush, intimidation, and isolation. Violence. Did Eli entrust Adrian with his old secrets?

The day Adrian gets out of prison, Gideon is out for revenge. However, something happens, an interception, and finds himself on the chopping block once again, when another woman is killed. Who is setting him up?

A serial killer is on the loose. Julia’s body was discovered years ago on the altar of a Pentecostal church seven miles from the edge of town. It was Elizabeth’s childhood church. A crime scene like no other. She found her, choked to death in a violent manner, body undressed and laid out on the alter and draped in white linen. No signs of sexual trauma. Same type of killing. Now it is happening once again.

Liz hated her father. Everyone thinks she is obsessed with violence, justice and Adrian Wall. Bad at relationships, a preacher’s daughter, a college dropout, a drinker, smoker, and now a fallen cop. She felt no remorse. Relationships were hard. Now she has three lost troubled souls to deal with. She is close to Channing, now Gideon. She had found his mother dead. She bonded with the boy, when the father fell apart.

She and Adrian had never had a relationship; however, she cared. How can she help him when she is up criminal charges herself? She had no badge, no standing—she has to help Adrian, Gideon, Channing, and herself. Liz did not believe in God any longer. She had almost died the day they met. Adrian saved her. Now she has to save him, somehow, while she is dealing with her own impending investigation and her own past psychological damage.

Liz treated Gideon like a son, Channing like a sister, and Adrian like some kind of fallen saint. She was a sucker for lost causes. Did Adrian go to prison to protect someone else? Who is Liz protecting? If Adrian did not kill before or now, someone is out to get him, and will do anything to keep the past buried. From police corruption, wardens, doctors, and prison abuse—who can be trusted. It is all about money and greed.

A town torn apart, lives destroyed, corruption, and a serial killer which has to be stopped—with Liz and Adrian, and everyone they are close to are in danger. They are both cops. Unless they can get to the money for a getaway. New victims linked in death. Killers are on their trail. More bodies in the place she had learned to pray. Was she a cop, fugitive, a victim, or some peculiar new thing? Who can Adrian trust? How many people are in on this elaborate scheme? Eleven women dead.

Readers hear from a demented killer, while keeping up with Channing, Adrian, Gideon, and an array of characters which keep you glued to the pages. I loved Faircloth Jones, a frail, retired lawyer “cry-baby” who steps up and risks it all to help Adrian and Liz. (wickedly delicious).

EPIC! Hart delves into deep raw emotions of the human psyche, and those of a dark and twisted killers-with characters you will fall in love with-some you will despise. Holding your breath to the explosive riveting conclusion. Heartbreaking, lost, flawed, loyal, and broken souls come together, and bond in unexpected ways.

A fitting title with an ongoing theme of "redemption" and the long road traveled. Good versus evil, this stellar page-turner is one to read in one sitting-Un-put-downable!

A North Carolina native myself, Hart continues to make us proud—always enjoy returning to my southern roots with the "King of the South"! Loved the ending-brilliant. Highly recommend all his books, and especially REDEMPTION ROAD. Man, North Carolina can crank out some rare and gifted writers!

Listen as award-winning narrator Scott Shepherd most recently appeared in Bridge of Spies, immerses listeners in this gripping tale of a southern town on the brink. (Have pre-ordered, audio as well). Should be quite entertaining.