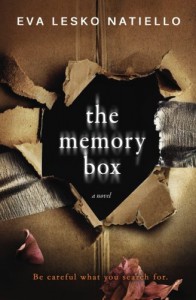 By: Eva Lesko Natiello
Narrator:  Cassandra Campbell
ASIN: B01DYTNMAI
Publisher: Blackstone
Publication Date: 4/8/2016
Format: Audio
My Rating: 5 Stars
Eva Lesko Natiello’s THE MEMORY BOX, is like no other book I have ever read. I cannot believe someone has not purchased the film rights. It is “prime” for the big screen. Unique and impressive debut. A crafty dark creepy mind-blowing domestic suspense psychological thriller with an unreliable narrator.

Fans of this genre- Move this book to the TOP of your reading list . . like NOW! Better still, buy the audio to achieve the ultimate thrill ride. OBSESSION. Evil. Who is the real Caroline Spencer Thompson?

Razor-sharp. Well-written and ingeniously constructed, mixed with wit and dark humor. The author leaves you pondering. Thought-provoking. The power of memory and the danger of envy, obsession, greed. Memory, imagination, sanity, and reality become intertwined with confusion.

Caroline (extremely well-developed character) lives with her husband, Andrew (Andy) and two daughters (Tessa and Lily) in a suburban neighborhood, with dog, Smarty Pants. Her husband travels internationally for work.

An elementary school. Moms. The suburbs. Women who gossip. Women who Google other parents, to find out the ugly secrets of their past. These women will dig up anyone’s past --until they bring their secrets to the surface for all to see, and put on display for the world. The suburban code.

Caroline decides to Google herself. Only three mentions. Community work and reviews. Nothing special.

Dark Secrets. It is impossible to unlearn a secret. It cannot be returned. Once you know a secret you cannot delete a secret. You own it. You cannot burn it. Click of mouse will not delete it from the conscious mind. A burden to lug. Some are great collectors of secrets. Secrets you wish you never knew. Secrets are regrets. The shameful kind. A Past. A web of deceit.

However, no one would ever Google “Caroline Spencer.” No one in this town knows her maiden name. Just reassurance. She just wants to check Google, to make sure there is nothing there.

Her Google search of her maiden name produces something which alarms her: 2002. Age 28 Jane Dorey (JD) Spencer in Pennsylvania, deceased! Her twin. Can’t be dead. Law degree. Law Clerk. Survived by parents and sister, Caroline Grace Spencer. This is her. Now she is numb. She faints. Has she lost her memory. She has been dead for six years?

She begins to investigate, keeping this to herself—she cannot tell anyone—they would lock her in a psych ward. (this is only the beginning). How can she have babies? She finds out she had a hysterectomy. When? Her daughter has horrible dreams. The dog is acting weird.

And more, twists and turns, shockers . . .Someone is indicted for practicing medicine without a license. New York years ago. Abortion. She is questioning her entire past. The layers are peeled back slowly and meticulously-- perfect pacing. A dark sense of foreboding is lurking. You know something is coming. 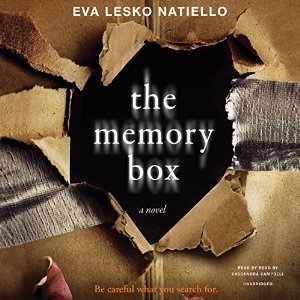 Chapter 23 (Audio) the last chapter is absolutely brilliant! I had to stop what I was doing and rewind—you could hear a pin drop. OMG . .chilling, mental, disturbing, wacky. Loved Andrew’s comments “one sick chick!” The cat and mouse between husband and wife was priceless. Leaving the reader to wonder. Fear. The unknown. I was laughing and holding my breath at the same time. I thought poor Smarty Pants was going to be butchered, like "bunny boiler."

Let me clarify. There is absolutely “nothing predictable”about THE MEMORY BOX. No way you will guess what is coming. Be prepared to have your mind messed with. The novel gets more difficult to stop, as the story screeches toward its unexpected spine-chilling ending. A shocking ride. Harsh realities of love, secrets, and obsession.

"Unreliable Narrator "
• In some books the narrator’s unreliability is made immediately evident. (Not the case here)
• A more dramatic use of the device delays the revelation until near the story's end.
• This twist ending forces readers to reconsider their point of view and experience of the story.
• In some cases, the narrator's unreliability is never fully revealed but only hinted at, leaving readers to wonder how much the narrator should be trusted and how the story should be interpreted.

Sorry, you will have to read, to find out.

Audio Binge I have been on a Cassandra Campbell and Jorjeana Marie binge-audio listen trip recently. (both exceptional). Cassandra gives a stunning award-winning performance! The author and narrator, a perfect match--glued to my Kindle and my iPod. And what a perfect cover – beautifully designed, capturing the essence and mood of the novel.

Not sure how I missed this book when it was released; however, prefer to wait on the audible release--(April 8, 2016). Was immediately hooked. I can see why THE MEMORY BOX has won so many awards. I actually liked it better than Gone Girl and The Girl on the Train. If you are going to compare a book to these two, this is the one which would compare. It is deep. Truly psychological. Spine-chilling.

Are people not really reading the entire book? Why the bad reviews? If you listen to the entire (read) book, this is one of the most extraordinary crafted and disturbing psychological suspense thrillers, I have read in a while.

Makes you wonder what authors are hiding? You can tell the author has a degree in psychology. It shows, plus she is a talented writer. Eva Lesko Natiello is NOW on my radar, and cannot wait to see what’s next. An author to follow!