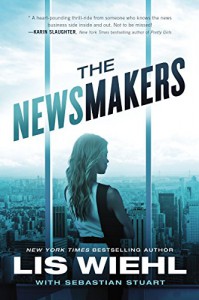 A special thank you to Nelson--FICTION and NetGalley for an ARC in exchange for an honest review.

There is so much here, so hold on - it is worth the journey!For those readers who may not be familiar with the author.

A fan of Lis Wiehl, and Wiehl of Justice FOX News Radio- One of the nation’s most prominent trial lawyers and highly regarded commentators, she is also the host of the podcast which is always fun and juicy--featuring other crimes, and crime authors. very interesting--loved the Karin Slaughter interview.

In addition, I have enjoyed reading Wiehl's previous books: Mia Quinn mystery series, and Snapshot an enthralling tale of good versus evil, inspired by actual historical events, civil rights movement and injustice-- landing on my Top 30 Books of 2014 —while anxiously awaiting her next upcoming new release.

OK, back to THE NEWSMAKERS:
Wiehl, steps up the intensity and complexity, with her riveting new series, with an unstoppable heroine – Erica Sparks, a journalist in the cross fires of cyber-terrorism, corruption, murder and a psychopath in disguise. Her personal life and professional become intertwined.

Erika, a driven and beautiful reporter, has a second chance. Her life is back on track after a tragedy—a train wreck. Nothing can stop her, or so she thinks. Until she is faced with the most dangerous web of deceit. A conspiracy. Cut-throat. Her life, her daughter, her career. All she holds precious. Her past has returned, and the enemies are using her past sins against her. Worst of all, she is in the center of this evil game. The sadistic psychotic minds behind the acts of terrorism, will stop at nothing due to their own greed, power, and control.

We meet Nylan Hastings, the network’s founder. Failure is something he does not do. He does success. He is excessive. Global News Network GNN is floundering, bleeding well over a million dollars a week, while he is searching for an identity in a competitive market. He wants a star. Someone he can mold and nurture--transform into the face of GNN. He needs raw talent, that intangible quality that makes someone leap off the screen and into the mind, heart, and soul. He lives for their fear. It is a power surge. They all are expendable. He demands control.

Greg Underwood, is the executive producer of GNN. He is one of the smart ones. Attractive, with fresh ideas. He has discovered a new star. Someone from a small New Hampshire station. She has talent. Erica Sparks. Nylan wants her on board. He is charismatic, idiosyncratic, enigmatic. He has an exciting vision of a synergistic network that seamlessly spans broadcast and social media.

Erica Sparks, blonde, beautiful, driven and sharp. She had endured a poor childhood and worked hard for her success. However, she has a dark past. She is delighted about her second chance—her first day on the job in New York as a field reporter. The first step toward scaling the heights of television news. She is renting a corporate apartment for six months. Nothing fancy. She is here to work, to build a new life for herself and her daughter. Jenny, her funny and brave eight- year- old daughter. She has paid a terrible price for Erica’s mistakes.

GNN headquarters is in the heart of American’s media capital, just blocks from NBC, FOX, and CBS. Erica is about to start the new chapter in her life. Erica is fascinated. She will show them what she is made of. Greg is to serve as her mentor. The company is well capitalized and aggressive, with an uncanny knack for breaking stories before its rivals. Ratings are going up and Erica could be in on the ground floor of something big. She could become a star. She would be able to give her daughter all the advantages she never had.

The job start out strong. She dives in head first. She is working on an interview with Duchess of Cambridge, coming to town. Her boss is impressed, she has been on the job less than an hour and she makes things happen.

In the meantime, there is Greg’s looks and charm. He is attractive; however, romance is simply not on her radar. There is chemistry. She is suffering from her vodka-soaked wounds of her failed marriage which destroyed her relationship with not only her husband-- her daughter, and her career. She has been sober for one year eleven months, and eleven days.

She was formerly working as a nighttime co-anchor on a Boston station and probably drinking a little too much when she discovered Dirk’s affair. He wanted a divorce and everything had spun out of control. From two glasses of wine a night to three to four cocktails to an all-vodka diet. Dirk had moved out and took Jenny with him. The station had fired her for on-air intoxication—she ended up in the hospital, under arrest. Plus more we learn more later, involving the safety of her daughter, ultimately losing custody.

The judge gave her a choice of rehab or six months in jail. She took rehab and then surrender, acceptance, grace. She had taken six months to get clean and pleaded her way into a job as a reporter for the small New Hampshire station. Just as Boston wanted her back, she received the call from Greg.

In the meantime, she makes friends, at the new job. There are also jealous back stabbers. The politics, the evil games.She is warned she cannot trust everyone.

Her big interview is scheduled under a tent at Battery Park—her first assignment. Kate Middleton. Before she can begin her interview, she witnesses a horrific Staten Island ferry crash. Of course she is there and performs brilliantly. Their ratings soar and her boss is thrilled. Of course, thereafter while working on the case, someone else takes over and steals her story. Someone is playing games. Someone knew the perfect moment to gain maximum media coverage.

Next, she lands a coveted interview with presumptive presidential nominee Kay Barrish. During the interview Barrish collapses. Erica valiantly tries to save her with CPR. The footage rivets the world—GNN’s ratings soar and Erica is now a household name.

Erica is alarmed and suspicious. Is someone pulling the strings? How could she be in the right place at the right time? She has a feeling; however, she is not sure whom she can trust. She is caught in the middle. With promises of grandeur, power, and money. She continues her investigation under the radar.

The undeniable fact the tragedies have benefited her career. She has always felt that success is 90% work and 10% luck. She is either very lucky or someone is plotting a bigger plan---she is in the center of the conspiracy. She suspects computer malfunction, terrorism, hacking. After all cyber-terrorism is the twenty-first century’s battlefield. She has a theory. She has to be a team player; however, she gets others involved in the investigation which puts them in danger.

Now, she has put her daughter in danger and herself. Someone wants to use her and kill her. Next, she and Greg become closer; however, can she trust him? Someone attains her sealed public records and wants to use it against her. Greg wants her to do an ongoing segment where she would interview celebrities and politicians who are also recovering addicts. She would be able to bond with them in a way no other reporter could. Her struggles could make her sympathetic.

Then the autopsy reveals a murder. Surely they could not hold her accountable. However, she is always there when a tragedy occurs. Nylan gets creepy. Her best friend Moira warns her to be careful. She knows there is a fine line between genius and madness. They want to offer her a contract of three million dollars a year, plus a housing allowance, car and driver. She is more than a news reader, she is a journalist. She is flattered with the money and the status; however, she feels she is making a deal with the devil.

However, on the other hand, she could get custody back of Jenny-- the money would give them a beautiful apartment and money for private school—every advantage of a privileged Manhattan childhood. Erica has to pick her battles carefully. Now they are offering her own show, The Erica Sparks Effect. She has to gather more proof.

Something is horribly wrong. What is the motive and who is behind this deadly game of murder for hire? How are they connected? How are they always one step ahead of the news?. Whoever is committing these crimes are putting layers of cover between themselves and the actual perpetrators. She has to follow the trail. They know too much about her personal life, and this makes her fearful. She is being manipulated. She is part of their web. Their plan.

Journalism and justice demand the truth. She needs proof. The closer she gets, the greater the danger. She cannot stop. She had paid a terrible price—losing custody of Jenny. Now another price must be paid. She has to face the bitter irony that she is committed to finding the truth—and in doing so, may be undone by her own sin of omission. If everything comes out she will never get custody of Jenny. Her life is crumbling. Now she has to save her own daughter.

“You can’t ever, ever change where you come from. And deep down you’ll never be better than any of us.” Words continue to haunt her—from her sick mother.

A race against time, at breakneck speed- someone is helping her with the investigation, and they are getting close to finding proof. As they head to Miami, FL, she has to keep up the front. Something is about to happen. She has an interview at the airport. The plane. She cannot be in the middle of another tragedy. She has to stop the mission before more innocent deaths. They find encrypted emails—someone hacked into the system, and breached systems. The enemies are going to make another deadly move. They have to contact the FBI. The secret service. They have the film crew. They have to stop the attack.

Wow, a riveting page turner! My heart is still pounding - Intense. You cannot put this one down. A mix of psycho-mystery suspense thriller: from politics, media, crime, power, greed, Russian Mafia, terrorism, conspiracy, and murder.

At the heart of the novel is a flawed heroine—of loss, love, family and redemption. Second chances. Motherhood. A journalist who wants to be her best. Uncovering the truth, no matter where it leads.

Erica shines! She is truly a battered little girl, in fear of her own mother’s fits. A teen who studied diligently, becoming the first ever graduate of her high school to make it to the Ivy League. In the novel, she is now a mother, guilt ridden about her past drinking and loss of her marriage and daughter. Desperate to get her daughter back, she is trapped in a situation that has spun out of control, as she is haunted by her sick mother’s mocking laughter, her terrors, and taunting peers at school. Never good enough. Reconciliation.

Hope we hear more from Erica. You will root for her-- her tenacity, and desire for a happy ending --possibly a little romance. No one can tell this type of story better than Lis!Looking forward to the next in the series. Highly Recommend!
mystery thriller suspense News Terrorism murder media Psychological Thriller Lis Wiehl Conspiracy Political Thriller netgalley arc crime thriller books read in 2015 psychological suspense 2016 new releases
Source: http://www.judithdcollinsconsulting.com/#!The-Newsmakers/cmoa/560cbc410cf2f0ed7a2a556b