Try Not to Breathe 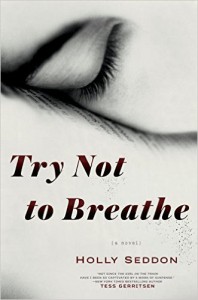 By:  Holly Seddon
ISBN: 9781101885864
Publisher:  Random House
Publication Date: 2/16/2016
Format: Hardcover
My Rating:  4 Stars
A special thank you to Netgalley, Random House, and LibraryThing early reviewers, for an ARC in exchange for an honest review.

Holly Seddon delivers a powerful debut TRY NOT TO BREATHE --two women connect under extraordinary circumstances, each fighting for a second chance as they overcome tragedy and loss.

Amy Stevenson was only fifteen years old when she was attacked, leaving her in a coma. A girl with everything to live for. Two best friends and a boyfriend. She had taken the long way home. She was still a virgin until this night. The attacker was never found and now years later, she is pretty much in a vegetative state in a hospital. Amy had a secret.

Alex Dale is a young journalist. She has her demons which have pretty much destroyed her career. Her battle with alcohol. Alcohol had ruined her marriage and it had been nearly two years since the divorce. At least once a week she planned her own death, drafting a farewell letter to Matt and the child she’d never planned, the child she would now never have.

She finds out about Amy and is intrigued by her story. These patients at Bramble Ward had their lives –they were still in there somewhere. Very few ever recover. Alex had a story and it was far more interesting than the one she had been sent to write.

They are the same age. She could not shake the thought of Amy. Who had left school one day and never made it home. She had grown up thirty minutes from Amy. She had been the biggest news story of 1995, lying in a human archive.

When Alex asked her detective ex-husband Matt for help, he is not happy; however, agrees to provide her with some documents to further her investigation. He still does not trust her. He is getting married to someone else and having a baby- to further depress Alex.

There are many secrets and lies. Someone visits Amy daily in secret. Amy may be able to communicate; however, she could name the attacker? Alex is determined to uncover who did this to Amy and why? She needs Amy’s help do so and Amy needs Alex’s support and determination.

We flash back and from Amy and Alex, as we get tidbits of Amy’s life before the attack. Readers also learn of Alex’s continuous struggle with alcohol. However, will both women find strength in one another, as they battle to rise above their circumstances?

The more Alex becomes personally involved in Amy’s case, the more determined she is to attain justice for her, and at the same time, Amy saves Alex. Two women are afraid to face the truth alone.

Seddon slowly unravels the layers of the mystery, while delving into honest flawed human emotion, fears, despair, and addiction for a compelling suspense –loved the epilogue.