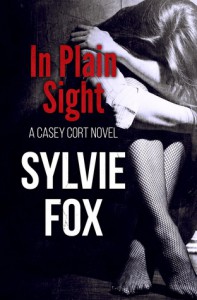 A special thank you to Penner Media, and NetGalley for an ARC in exchange for an honest review. Includes spoilers.

One of my favorite witty, crime mystery-legal thriller series,Casey Cort (a mix of my top genres). I fell in love with Casey Cort and author, Sylvie Fox when introduced in 2014, with Qualified Immunity. (Love strong women). More intense suspense followed with Under Color of Law in March 2015.

IN PLAIN SIGHT, the third in the series (Casey really gets herself caught up in a dangerous web of deceit), she once again is faced with many moral decisions, which spills over into her personal relationships, and professional career. The lines are blurred between good and evil.

As we pick up from the previous book, there is a romance developing between Casey (white) and the rising assistant U.S. Attorney Miles Siegel (black). However, things do not go so smoothly when the cases conflict.

Defense and Prosecution. Prosecutors charge suspects with crimes and attempt to convict them in court, while defense attorneys strive to defend their client, the suspect, and prevent a conviction. Oil and Water. Not a good combo for romance.

Set in Ohio, as the book opens we meet Stephanie Wells, in 1999. A fourteen-year-old caught in a difficult situation. Her stepdad just died, and she is glad. Clark has sexually abused her for years. She tells her mom. Of course her mom does not believe her. Stephanie’s life is miserable and she wants nothing more than to escape this environment, before the next man enters their house.

A walk to the park, introduces her to Dion. A devil is disguise. He is nice; however, she is naïve, and does not realize she is walking into a situation, possibly worse than what she had at home. (two evils). Her life will be forever changed in horrific ways for years to come, due to this encounter.

Little does she know, Dion is working for Sledge (her nightmares are just beginning). A young innocent girl now trapped in a world she cannot escape. More abuse. (this girl broke my heart) however, she makes very poor choices and appears she likes food more than anything) she continues going back to the source of her problems. The crazy mom, her loser boyfriends, her sister, and Dion. She needs help!

Jump to 2004, to Jarrod Carter (Sledge Hammer) now a client of Caseys. Of course, she has no clue his background. She knows she needs the money and he is willing to pay. A criminal, a sex trafficking ring, and the lives of innocent young girls and women. He locks them in containers or motel rooms. He uses them for money in order to take care of his own family’s health issues, with the help of his two pawns: Grand and Dion, luring the new desperate young girls into the web of corruption. Jarrod has his own baggage: a sick mother, drug addict sister, and a niece, and all the time trying to move the girls from motel rooms, containers, to his home---to keep from getting caught. A criminal enterprise of pimping women and children. The Midwest’s most notorious sex trafficker.

Casey Cort, formerly an attorney from juvenile court. She barely can pay her bills. She thinks the big money is in criminal law. However, she is a puppet in an upcoming drama which may destroy her personal relationship as well as her career. There is a connection with her past relationship with Judge Brody and her ex-finance (who liked them young, black, and willing). Now she is on her way to prepare a trial.

U.S. Attorney Miles Siegel is working around the clock, to find this criminal, Sledge to put him behind bars. Little does he know, he is Casey’s client? Her client's name is Jarrod Carter. She is defending him. Prostitution, sex trafficking, kidnapping, conspiracy, white collar criminals, violence – you name it; except innocent until proven guilty. Sledge is always one step ahead of the law. With this much tension; no room for romance.

Each character is desperate and striving for something better than they have. Each choice is worse than the previous one. Greed, money, complications, morals, and obstacles get in the way. Resulting in poor choices, guilt, and dangerous outcomes. No happy endings here for anyone. Everyone is keeping secrets.

On a positive note, always love catching up with my favorite gay neighbors, Greg and Jason (not a lot of face time though in this one).

The good and the bad.

While I love the Casey Cort series, and Sylvie’s writing (wit, humor, and awesome courtroom dramas), glued to the pages with suspense and mystery; however, I was greatly disappointed when I reached the ending. A huge let down. There was so much left hanging. I actually went back to re-read the last few chapters, thinking I had missed something, or fell asleep with my late night reading. What the heck?

When I reached 90%, I knew there was no way this was going to wrap up. I was going Oh, NO…(you know when you invest all this time in a book and left hanging?) Nothing really was settled with Stephanie, Casey, Miles, or Sledge. Typically with the previous books in the series, each wraps up nicely. Characters may appear in future books; however, the books move on to a different storyline. With the other books, I rooted for Casey; however, with IN PLAIN SIGHT, not so much. I did not like some of her choices. (am a fan of Miles).

The storyline with Stephanie's character took top focus and the most intriguing (what a childhood). Dying for some justice for her with a continuation of her character. I kept saying: "Go to the police, turn these guys in!" - losing patience with her. Wanted to smack the mother and sister. Want more back story of Dion, an interesting character.

Hopefully there will be a fourth in the Casey Cort series, to find out the fate of the characters. I was all set to give this one another 5 stars, as a great story, like the others; until the abrupt ending (a 3), so balancing with a final 4 rating.

Will poor Stephanie get a second chance at life? What about Casey and Miles – do they stand a chance on opposite sides of the law? Will Sledge finally get caught as his misdeeds catch up with him? Will Casey find a part of the law which fits within her budget, lifestyle, fulfillment, and moral character-- both personally and professionally? Will these victims and women get the help they need? I am hanging out on a cliff awaiting the next.