Where All The Light Tends to Go 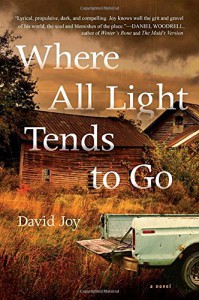 By:  David Joy
ASIN: B00L9AXYU8
Publisher: Penguin
Publication Date:  3/3/2015
Format: Other
My Rating:  5 Stars
WHERE ALL THE LIGHT TENDS TO GO, David Joy’s debut is a gripping harsh tale set in deep rural Appalachia— a young teen, trying desperately to escape his evil, dysfunctional family environment, and pulled in emotionally by a meth-addicted mother and a sociopath for a father.

Jacob McNeely’s world has no future. It is a cruel world, pulling him into a dark world of violence. From the dark mountain woods of Sylvia, NC, a father runs a meth ring, and his mother is an addict. Jacob’s dad has forced him to help him with his illegal business. Killing or whatever it takes. He has dropped out of high school, and has no friends. This is the only way of life he knows.

The light of his life is a girl named Maggie, his first love; however, he has nothing to offer her. She desires to escape this backward town for a better life and future. Jacob encourages her and supports her.

Jacob is involved in violence while his father controls everything around him. At the same time, he is pulled—sucked into being loyal to his family. Can he ever leave the mountains, his family and have a life with the girl he loves? If given the choice, can he leave, or break free from the bondage.

A heartbreaking story of a young teen, and the dismal realities of his future, and his desires and hopes; a young love, he can only dream of. From darkness to light, Joy captures every glimpse of hope and sadness. Brutally honest, as beautiful as it is heartbreaking. He captures the harsh realities of the area, its people, and culture, with storytelling drawing you into this world from his character’s own heart and soul.

While I listened to the audiobook back in June, I was traveling at the time, and as I often do, rate the book with a review to come later. However, often, especially with audio, I fail to return with the writing of the review.

While reading Brother by Ania Ahlborn, also set in the deep rural Appalachia— (horror) of a young boy bound emotionally, haunted by a violent abusive family trying to escape his life (totally different twist); made me think about David Joy’s Where All the Light Tends to Go. It was so powerful. When going back, noticed I had not written a review. This is a book you cannot forget. Narrated by MacLeod Andrews with a voice, matching the characters, and the setting, delivering a solid performance. (highly recommend the audio version).

In the tradition of Winter's Bone meets Breaking Bad, a savage and beautiful story of a young man seeking redemption.

A native of Charlotte, NC, I enjoy supporting Carolina authors. I was initially drawn to the book, having spent quite a bit of time in the Highlands and Cashiers, NC mountain areas (of course, nothing like this), as have only seen the beautiful side: hiking, waterfalls, luxury vacation rentals, rustic cabins, hotels and the upscale resorts; Yes, the dark side, exists.

David Joy has written an extraordinary Southern literary debut, and captures the intimate feelings and emotions of his characters beautifully. Available in paperback Feb. 2016