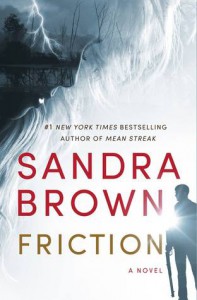 By:  Sandra Brown
ISBN: 9781455581160
Publisher:  Grand Central
Publication Date:  8/18/2015
Format:  Other
My Rating:  5 Stars
A special thank you to Grand Central Publishing and NetGalley for an ARC in exchange for an honest review.

Sandra Brown returns after Mean Streak, with her latest, FRICTION —a sizzling, and intense romantic suspense conspiracy thriller, featuring a sexy tough Texas Ranger, a beautiful driven Judge, and an innocent five year-old- girl, and some evil people threatening all their lives and futures.

Texas Ranger Crawford Hunt’s wife died the previous year. He has been through some tough times, grief stricken, and has gone a little crazy over the last year. He agreed to allow his former wife’s parents custody, in order to raise his five year old daughter, Georgia until he could get back on his feet and deal with the grief.

However, now he has had time to get his act together, and wants nothing more than to regain custody of his much loved daughter. He has waited patiently for this day, as the short visits with his daughter are not enough. His heart breaks each time he leaves her and she loves her daddy. He wants her full time in his own home. He has even hired a designer to prepare his daughter’s room in her favorite color pink, which cost him a fortune, as he prepares to get his daughter back, where she belongs.

The day has finally arrived and he meets his attorney– the custody hearing. Tensions are high and he prepares himself for objections. He decides he will leave his gun at home, as needs to present himself, as a changed man, a good father. After all he has to deal with his father in law, Joe, a former cop, which is his worst enemy. He never has liked him.

In the middle of the hearing, prior to the judge’s final decision, a masked gunman breaks into the courtroom, and begins shooting. Quick to react, Crawford comes to Judge Holly Spencer’s side and saves her life. However, some are not so lucky, killing a bailiff. Immediately, Crawford grabs the bailiff’s gun and goes after the gunman. He is led to the rooftop for a show down.

What comes next is a series of events making Crawford look guilty. Was this the real killer? Who was the gunman? Who was he after? Motive? Holly or Crawford, or someone else?

A sniper kills the gunman, and first it appears Crawford is a hero, until it comes clear to Crawford, he has been set up. In the meantime, Joe is using this impulsive behavior against him, making him look bad. Sgt. Neal Lester, a detective seems to be working against him. With restraining orders, so he is not able to see his daughter, and fear for his life, Holly’s and Georgia’s-- Crawford’s life is spinning out of control. He cannot lose his daughter. He is desperate to solve this case, in order to get his life back.

In the meantime, Holly and Crawford develop an intense sexual attraction. Her running opponent will be watching her every move, while everyone else is watching Crawford. She has recused herself from the case; however, until they know the identity of the real shooter, no one is safe. Crawford and Holly have to steal away for time together, to try and put the pieces of the mystery together.

As always, Sandra never disappoints. The suspense and intensity are smoking hot, with passion, danger, and crime, at a breakneck speed--making for an engrossing riveting non-stop action page-turner. A mix of legal, crime, mystery, courtroom drama, cop procedural, romantic suspense, and thriller – you will root for rough and tough Crawford and a father’s special love for his little girl.

Typical of Brown’s complex multi-layered writing, (one of my favorite authors), expect twists, secrets, and some surprises at the end-- you do not see coming.