BROKEN PROMISE (Promise Falls #1) is "hands down"Linwood Barclay's finest work! Has been added to my Top Books of 2015. OMG! What a gripping page-turner. Even more exciting, there is a continuation (like Christmas, comes again).

An explosive novel about the disturbing evil secrets of a quiet mysterious small town (turns out, not so quiet). Set in a fictional upstate New York small town outside of Albany, called Promise Falls—a town slowly dying, with a number of the businesses closing, or recently closed, and the younger generation, forced to move on to larger cities with better opportunities.

Since the former mayor, Randall Finley got caught with an underage prostitute, no one since seems to possess his same tenacity in support of the town. Even though he is a snake, he was able to keep the town afloat. He now owns a thriving water business (Finley Springs) and seems to be the only one hiring in town. However, he does want to get back into politics, and working his way back to running for office again. He is also trying to bribe his way back in the right circles, and connections.(looking forward to hearing more from this character).

A multi-layered plot, with an array of intriguing and well-developed characters, and a town of scandalous secrets, lies, conspiracy, murder, possibly revenge, and a list of mysterious events-and the mysterious number, "twenty-three".

As the novel opens, David (main character) is moving back to Promise Falls, the town he hates; moving in with his parents. At the age of forty-one, he never thought he would be moving back to the childhood home he left some twenty years ago, and now with his nine year old son, Ethan. How did he get here?

He really had limited choices. The downfall started five years earlier after his wife, Jan passed away. He was left raising his son alone with a great job at the Boston Globe as an investigative reporter. However, with deadlines and work, he felt he was not devoting enough time to his son. He had gone from reporter to editing desk job. His mom and dad would be a great help, but of course they were not able to travel, to Boston, so he had made the decision to move back to Promise Falls to take a job with the local newspaper, The Standard, where his parents could help out with Ethan.

However, well laid plans, soon turn to disaster. The first day back, the paper announced they were closing the doors with all the other failing business. Just Great – now no job, or any prospects of a job in this miserable town, living with nosy parents, (Don and Arlene), plus his son-- the new kid at school, has no friends and is miserable—with some issues with another boy at school.

With David’s first day out of work, his mom wants him to run an errand for her. Little does he know running this simple errand will land him in the middle of a murder investigation? He is to take some food to his cousin Marla. Simple enough. Marla has been through some traumatic events—an online reviewer, she got pregnant by a younger college student, her mom (David’s aunt) did not care for. The baby was born dead and Marla has not recovered, and afterwards caught stealing another baby from the hospital. Of course, her mom is the hospital administrator and takes care of covering things, as she is all about control and appearances.

Now, David arrives at his cousin’s house and she has a baby? What gives? Has she stolen another baby? She says an “angel” dropped it off with a stroller. Is she nuts? David notes some blood stains on the stroller. He does not want to panic his cousin, and when she is getting dressed, David sees a flyer in the stroller with an address. David puts Marla and the baby in the stroller and heads to the address. When they arrive, at the home, they find a dead woman, Rosemary Gaynor, brutally murdered, and a frantic husband, Bill.

Did Marla kidnap Matthew and kill the mother? What happened to the nanny? David knows his cousin is a little strange; however, a murderer, he does not think she is capable. Marla also has face blindness. Something is not right, and David begins using his investigative reporting skills to do some digging to get to the bottom of his mystery.

In addition to this murder, Officer Barry Duckworth (obsessed with donuts and trying to lose weight) has his hands full, juggling cases coming at him at once with a sweep of crimes in the area. A murder, a missing Nanny, her boyfriend, a fatal shooting at Thackeray College, rapes, strange things in the night at Five Mountains, a deserted amusement park, with three mannequins on a Ferris Wheel, and twenty-three dead squirrels hanging, mixed with a message "YOU'LL BE SORRY".

Duckworth's homefront is not so simple either, as he has just learned his son, Trevor is now working as a driver for Finley. Finley cannot be trusted—he is dying to find out things going on in the police department, to use for his own purpose.

In the meantime, we meet a few other families, each with their own secrets. David’s dad, Don is hiding something. His mom, Arlene is forgetting things; Jack the doctor has a gambling habit, Marla is struggling with reality, Samantha, the mother of Carl (the boy who was mean to Ethan), with baggage of her own; works at a laundromat, wear tight jeans, hot, and carries a shotgun—possible love connection for David? Marla’s mom is a control freak, with her own secrets, and dad is having an affair. Best of all Finley has offered David a job running his media and campaign (we are in for a treat with this one).

There is also a backstory of Olivia Fisher, a young woman with a bright future, killed years ago in a brutal murder. Her mother died of cancer recently, and the dad remaining - still grieving, and left to control the fiancé, who has turned into a raging alcoholic.

The book ends with a delicious cliffhanger. The main mystery has not been solved, as the killings may be connected to an older case. There is a message someone is trying to send. Is it revenge? Is the killer walking among them, and someone they all know? And oh, more with hidden secrets, yet to come to the surface. I am dying for the next installment! Here is hoping I can land an ARC, as the suspense is killing me.

Loving the array of eccentric characters in the town of Promise Falls, with this new riveting series! How intriguing, and Barclay grabs you from page one and hooks you to the end.

A mix of psychological, crime, cop procedures, forensics, mystery, suspense, wit, and humor----all rolled into one action-packed thriller! Was so engrossed, purchased the audiobook in addition to the e-book. YEAH, appears there will be more to come. Final Assignment (Promise Falls, #1.5), Far From True (Promise Falls, #2) and hopefully more to come.

On a personal note: I have made the drive from Albany airport to the Catskills and for some reason, I am thinking about this mysterious fictional town of Promise Falls, similar to the surroundings. Will continue to think about this book each time I return (chilling).

Highly Recommend! Thriller fans will devour this new and exciting series. 5 Stars + (my kind of book).

"Barclay, who lives in Canada, continues his penchant for delving into American small towns, creating believable settings that pack an emotional wallop. Barclay's well-sculpted characters add to the solid plot, from David and his family to a sleazy former mayor trying for a comeback, a hard-edged hospital administrator and a villain who hides in plain sight. Promise Falls isn't the town most of us would want to live in, but we can't wait to revisit. Barclay's "Broken Promise" assures more visits are on the horizon."-- Oline H. Cogdill, SouthFlordia.com

Meet the Author
Finally, get to experience this awesome author in my own South Florida backyard. Thrilled, I am there for both events!

Barclay will discuss "Broken Promise" at 2 p.m. Aug 4 as part of "Between The Covers," the WXEL Book Club at the WXEL station, Boynton Beach to air Aug. 21. Barclay also will discuss his novel at 7 p.m. Aug. 4 at Murder on the Beach, 273 Pineapple Grove Way, Delray Beach. Move over Michael Connelly- The state of Florida and its loyal fans have room for two outstanding crime authors! 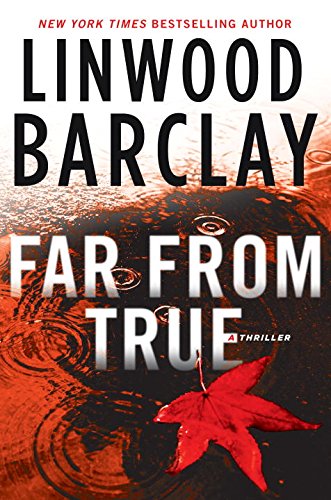