The Bones of You 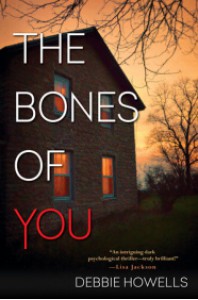 By Debbie Howells
ISBN: 9781617737664
Publisher:  Kensington
Publication Date:  6/30/2015
Format: Hardcover
My Rating: 4 Stars
**Upcoming Blog Tour Stop**
Join Me on June 11 for contests and surprises
A special thank you to Kensington Books and NetGalley for an ARC in exchange for an honest review.

THE BONES OF YOU, dark psychological suspense thriller debut by Debbie Howells, a haunting novel of deceit and lies. A young girl’s murder and one woman’s obsession with uncovering dark secrets in this idyllic English village, drawing you into this intriguing world of mystery. A taunt chilling novel which will keep you page-turning into the wee hours of the morning.

“Stars are the souls of dead poets, but to become a star, you have to die.” Vincent van Gogh

“It’s true, what they say about when you die. In the final, terrible seconds of my life, eighteen years flash before my eyes. It’s when I understand the difference between life and death.”

Rosie has gone missing. . as the book opens. Rosie is looking at the movie of her life. THE BONES OF YOU, is an intense character driven novel---readers get an inside glimpse into all the people surrounding the life of Rosie Anderson, an eighteen-year-old teen who has been murdered. Their dark secrets, lies, fears, and deceit (and there are many) are slowly unraveled piece by piece.

Rosie “There are always two camps. Good and evil. Beautiful and ugly. Winners and losers. Andersons are never losers, just as they’re never anything less than perfect."

Gripping and tragic, flashing back and forth from Rosie, narrator, as she plays back the events of her life, to Kate, narrator, and sister, Delphine--readers slowly learn of all the suspects which touched Rosie’s short life.

Living on opposite sides of a small village with daughters at the same school, Jo and Kate belong to a group of mothers who meet now and then. Jo is married to Neal, a renowned journalist, who reports from the middle of war zones. They have a nice house and nice cars; however, Kate is drawn to Rosie. She is the same age as her daughter Grace. Rosie is also deeply drawn to Kate and her horses.

Rosie is a shy girl, quieter than Grace and share a love of horses with Kate. A feeling of foreboding hits Kate, a fear, a raw panic engulfs her and she is terrified, and she senses Rosie’s voice screaming her name. Rosie was murdered. Her body was discovered in the woods. Evidence of struggle, suffering several blows to her head, before being stabbed viciously a number of times. She was found in the same clearing where Kate fell off horse Zappa and she did not see her.

Everyone begins to speculate the reasons behind her murder. An unnamed boyfriend, the mother, perhaps the father with many faces, the charming one, or friends? A stranger? Are they all suspects? Behind the façade of constrained smiles and familiar exchanges there is a shift in the village. They could have a murderer in their midst.

A secret boyfriend, Alex, a younger sister, Delphine, Jo, the mother, Neal, the father, Emma or Grace, friends, Kate, perhaps? “Lies are like dough, or malignant tumors. They get bigger.“ Kate becomes almost obsessive about finding the murderer and the Anderson family. While she desires to comfort her friend, Jo, her husband, Angus is not thrilled with her involvement.

My favorite parts were those from Rosie; her words are haunting, yet magical, leading to the explosive finale; the story behind the story. The part of the story no one knows. Hate, lies, toxic behavior, and the truth.