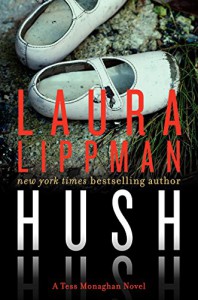 Twelve years earlier, Melisandre Harris Dawes committed a horrible crime, leaving her two-month-old daughter locked in a hot car while she sat nearby on the shores of the Patapsco River. Melisandre was found not guilty by reason of criminal insanity and spent time in a mental institution. She was a wealthy, beautiful former Baltimore socialite, once an attorney, and later wife of a wealthy developer. After being released she fled the country, leaving the two older daughters with their father. Not many agreed with this verdict.

With such a controversial case, a decade later, Melisandre is in town for a documentary on the insanity defense, and wants to reconnect with her daughters, now ages 15 and 17. Their dad does not want them to be a part of this to relive the nightmare. There will need to be high security, as she has a lot of enemies.

PI Tess does not want to be involved with this crazy woman (like how could a mother do such a thing)? However, her friend Tyner (Melisandre’s attorney) has requested Tess and her new partner, Sandy to oversee the former crazy woman’s security. Of course, all does not go well, when the threats begin to occur and turns dangerous.

Moving back and forth between Tess, Sandy, Melisandre, the daughters, and the ex’s new wife—we soon learn everything is not as it appeared, leading to a whodunit mystery. I enjoyed the family which was left behind and how their current lives are affected. Tess, is constantly second guessing herself in her role with Crow and mother as high drama and complications.

Some may think the food rules are a little over the top; however, I can appreciate his food rules, since I have to eat this way, as have MCS (multiple chemical sensitivities), very serious food allergies. If I eat something with an additive or preservative I go into Analyphaxis which is very scary. Unless you have these type allergies, you do not take it seriously.

Tess and her stressful demands, her live in boyfriend, and motherly duties to bratty Carla Scott took over a big portion of the story, a little distracting as she balances work and her personal life; however, an overall an intriguing psychological mystery suspense. I listened to the audiobook and Jan Maxwell delivered a pleasant performance.