You Can Trust Me 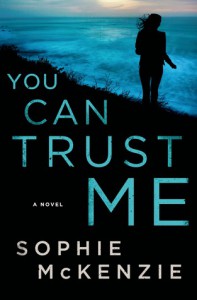 A special thank you to St. Martin's Press and NetGalley for an ARC in exchange for an honest review. 3.5 stars

Set in England, Julia and Livy have been friends for years, since they bonded over a brutal murder fifteen years ago of Livy’s sister, Kara when she was a college student.

After her murder, Kara’s friend, Julia, became Livy’s friend, a friendship that remained close despite their different lives; Livy, a homemaker and mother, and Julia living a more exciting life with numerous short-lived relationships. Years later Julia is found dead, alone in her flat and Livy begins to realize everything was not as it seemed.

When Livy arrives at Jula’s flat for a lunch date, she finds her dead, as she did not answer her text the previous night and now feels guilty. Of course, her death was ruled as a suicide; however Livy cannot accept this decision, and begins to dig further to solve the mystery of her friend. She knows her friend loves life, and would never take her own life. What if she was murdered, and by whom? Could the killer be one of Livy’s friends, family or acquaintances?

Livy, is married to Will, with two children- 7 year old son, Zack and her 12 year old daughter, Hannah which is a brat. A stressful marriage from a former infidelity and a daughter which is problematic.

The more Livy uncovers, the more she realizes her friend was not always truthful and forthcoming. She finds out about a man, Damian who was in a relationship with her friend, one she never met. These two combine forces without the help of the police. Livy goes off on these tangents without thinking, not knowing who to trust. Together they start to investigate Julia’s last days.

Julia’s diary leads them on a chase looking for a killer who is so much closer than they realize. Too late, they discover how much danger they are in and that they may be the next victims. And when Livy finally faces her sister’s killer, and he traps her with one horrible, impossible choice, she must finally decide: is she strong enough to trust herself?

McKenzie interjects the killer's perspective, and tidbits, offering readers a look into more dark sides of the personality and motives. There is a long list of suspects-- as to the identity of the killer. The best part of the book for me was, the psychological parts of the dark psychopath killer.

My first book by McKenzie, and will have to agree with some of the other reviewers, not evenly paced. Very slow moving until the last portion, when things intensify and really heat up when the cases come together.

Livy continued to dwell and dwell, on her husband's infidelity six years ago with no trust or intimacy. However, on the other hand, she immediately trusts Julia's grieving fiancé, Damian, one of mystery; since Julia had hidden his identity from her.

Would have liked a little more sarcastic humor mixed in, and all the characters thrown at you in the beginning, with a long list of suspects--throws it off a little. Livy was not a likable character, and of course Julia was more intriguing. Look forward to reading more by this author, even though I was not totally in love with this one.

Recommend to crime fiction fans who enjoy a long line of suspects, and slower pacing with some psychological elements.