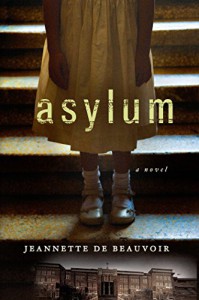 ASYLUM is a shocking, disturbing, and harrowing, yet absorbing mystery by Jeannette de Beauvoir, of innocent children, orphans— being transported to insane asylums in the middle of the night, subjected to torture, harsh treatment, appalling and inhuman experiments, mind control, medical experimentation, and sexual abuse at the hands of psychiatrists, priests, nuns and administrators.

Montreal had been experiencing random killings.Women all over the city were being advised to take precautions not to take the bus or the Metro alone, purchase extra locks, and tone up the security. Now the body count is up to four women, in the middle of prime tourist season; found brutally murdered and posed on park benches, throughout the city over several months.

Martine LeDuc is the director of public relations the mayor's office in Montreal and she becomes involved in helping police detective Julian Fletcher, after her boss becomes concerned they are rapidly becoming the murder capital of North America --concerned about the city’s image.

Being she is in public relations it is her duty to help smooth over this situation. She is not the police and not qualified; however, she is to act as a liaison between the parties. What connects these four women? Appears they may have a connection to the Cité de Saint-Jean-de-Dieu Asylum.

We hear from a desperate child (diary) being transported from an orphanage to a strange, scary, and chilling place of screams, offering no protection where the only lesson that mattered, was how to survive--to a disturbing investigation (Watson/Holmes), uncovering dark political secrets dating back to the 1950s.

From an orphanage scandal in the 1950s and sixties with churches running orphanages or asylums where at the time it was a sin to have baby out of wedlock—a social sin, or families who could not afford their children, or one parent – they were left at the orphanage.

However, some discovered federal grants and support money offered from Canadian government for kids in asylums more than orphanages. Suddenly a number of orphans became mentally ill, sane turned to insane and they were all locked up together.

Quebec soon labeled these children, either crazy or mentally deficient and locked them away (Duplessis orphans) and after he died, they kept taking orphans thru the sixties. From straitjackets, electroshock therapy, hydrotherapy, excessive medication, lobotomies, where humans became guinea pigs for pharmaceutical companies.

Martine finds herself imprisoned underneath the old asylum, tunnels, drugged, thinking she may be in purgatory or dead--as a race against time for a chilling and complex suspense mystery.

The author delivers a heartbreaking tale— yet informative account surrounding political tensions, and controversial issues during this shocking time—much of what fictional protagonist Martine LeDuc learned about Montreal’s past, is unfortunately true.

As the author mentions, yet today, evidence reveals the Duplessis Orphans, railroaded into psychiatric hospitals as retarded and mentally ill, were being administered the powerful drug of chlorpromazine as early as 1947 with debilitating effects.

An alarming reality, the federal government offered more monetary support for asylums than it did for orphanages—a financial incentive, plus the medical experimentation reward, as these institutions continued the scheme developed from the 1940-1960s, obtaining additional federal funding for thousands of children.

Appears there still remains controversy over the old cemetery at the Cite de St-Jean De-Dieu asylum with nameless children. The author offers a partial list of those identified, as a list of minors under the age of 21 buried in Saint Jean de Dieu Asylum Cemetery, between the years 1933– 1958.