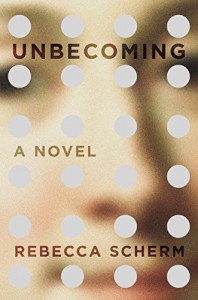 Rebecca Scherm’s debut UNBECOMING follows a southern gal from Tennessee to Paris, a flawed and complex young woman on the run, a new name, a new identity, always looking over her shoulder for two men she has known a lifetime. A psychological thriller of love, international art crime, and deception.

Grace grew up in southern Tennessee; however, now she is now a professional international jewel thief. (this girl gets around). A lot to tell in between with flashbacks from point A to B. A good girl, gone bad. Leaving a small town to establish her own identity, for New York where she learns a few tricks and becomes interested in the world of art; learning how to lie, deceive, and pretend she is someone else.

Grace, Riley and Allston grew up together as friends. Riley was the wealthy one as son of a doctor, and Allston grew up hard without money or a mother. Grace was not happy at home and she envied Riley’s family as they were cultured, and glamorous to her, developing a bond especially with Riley’s mom with a longing and obsession to have this life.

Presently, her husband, Riley and her former lover, Allston have been released from a Tennessee prison and she knows they will come after her. She has not been in touch with either of them since the arrest for a robbery—Grace was the mastermind behind the heist, before taking off for Europe with a stolen painting. Now in Paris (with a new identify, Julie) she works as a restorer of antiques, but what really makes her happy? What is she really seeking?

The book takes readers on a journey of a teen who goes from one personality to another, an exploration of sorts with flashbacks with Grace. A love triangle - Both guys in her life have done jail time for an antiques theft she planned; now she is sure they are hunting her. Grace of course has no ties from anyone in her former life – will they find her?

Even though the novel had a good set up, somewhere along the way, it lost momentum for me as a true psycho-thriller, as could have been more twisted, but there again, I did not care for Gone Girl; however, do not think the two compare. I did not feel a real connection with the characters; however agree with some of the other reviewers, enjoyed the story of Grace more so than Julie. However, some really good writing--so struggling with the rating as was not in love with the entire story.

UNBECOMING is a realistic view of trying to reinvent oneself, attempting to overcome a past; and when trying to do so, gets caught up in greed and loses themselves, their true self. Ultimately, they feel inappropriate or acceptable. Yes, was a little surprised at the ending being all wrapped up neatly.

However, would recommend reading as each person of course has a different perspective and takeaway—look forward to reading more from this author!.