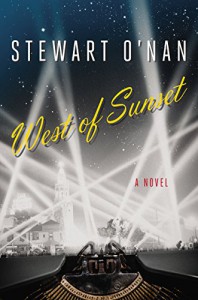 A special thank you to PENGUIN GROUP Viking, NetGalley, and Penguin First to Read for an ARC in exchange for an honest review.

As WEST OF SUNSET opens, Stewart O’Nan takes readers to the mountains of North Carolina, as Scott Fitzgerald is visiting his wife, Zelda for their anniversary, a day trip to Chimney Rock, where Zelda is a patient of Highland Mental Hospital in Asheville, North Carolina, due to her depression and mental illness.

At age forty, Scott and Zelda have experienced numerous setbacks, and now with Scottie, their daughter off at boarding school, he no longer has a home and has become a transient. A relief, somewhat, as this is one less expenditure; however, it saddens him, as they have no home to go back to, with their cherished possessions now housed in a dusty storage.

Scott is struggling financially, as has cut back on his expenses in order to pay for both the high cost of the hospital and Zelda’s care, as well as Scottie’s tuition, but somehow he has refused to skimp on his responsibilities, as this would be too easy. Every month Zelda’s mother urges him to allow her daughter to come to Montgomery; however, she is not ready, if she ever would be. His hope is that Dr. Carroll would help her get well so he could go to Hollywood and make enough to cover his debts and maybe buy himself time to write the novel he owed Max.

With Zelda everything is a test and presently, here in NC, Zelda, thirty-seven, is no longer the woman he met seventeen years ago—the dancer, flirty, and the irresistible woman she once was, even though she is exercising and eating healthy and following the doctor’s orders for the moment (until her next outburst).

Scott begins questioning himself--if she indeed had been mad all along; as possibly he was attracted to this side of her; however, despite all they squandered, he would never dispute that they were made for each other. He continues to put off telling Zelda about his upcoming trip to Hollywood and finally puts his intentions in a letter as he makes his way to Hollywood.

At one point there was always a promise of at least a thousand a week, which he so desperately needs to pay off their debts. But Ober couldn’t get them to commit—as the studios had concerns about his drinking as he continues to tell them he has not touched a drop, as his drawers are still full of empty bottles.

In Hollywood, he meets Sheilah Graham, an L.A. gossip columnist and they become lovers. This is of course, a stage name as she grew up an orphan and did not come from money. Over time Scott knows in her eyes, he is old, weak, and unreliable and sure she is tired of playing nursemaid until the end. Their relationship appears not to be a highly romantic one; however, more of a convenience and friendship.

Most of his Scott's income came from short stories, he also started to get involved in the film industry, and once again in dire financial straits, and spent the second half of the 1930s in Hollywood, working on commercial short stories, and scripts including Gone with the Wind, and his fifth and final novel, The Love of the Last Tycoon and screenwriter.

A huge fan of Scott and Zelda, I devour and am totally captivated by anything written about this intriguing couple and era. We all know and have read about the glitz and glamour of the Jazz Age; however, feel Stewart O’Nan delivers a compelling intimate portrayal of one man’s struggle with compassion and clarity—as Fitzgerald strives for success in his writing, his work, and some sort of order for his own personal life, as a husband and father—even through the temptations and desperate need for fame, fortune, money and alcohol.

As you read WEST OF SUNSET, you feel Scott’s inward blame for Zelda’s condition, as he had loved her, but possibly not enough—as much as he loved himself or his need for success as a writer.

As quoted, “Between the tragedy in Europe and Zelda´ struggles, he had the debilitating sense that his life was governed by sources beyond this control.“

“In Scarlett he saw Zelda wildness and pride, in Rhett his own rage and dissipation. They weren’t innocents like Romeo Juliet. Their love was undeniable for the same reasons it couldn’t survive.”

It is so sad to realize the hurt and struggles of this highly talented man, who really does not become a true literary legend until after his death. Of course the account is not all doom and gloom, as readers get to experience the Hollywood glamour, celebrities and old friends and acquaintances such as Dottie Parker and her husband Alan Campbell, Humphrey Bogart, Ernest Hemingway, Joan Crawford, and stars such as Gary Cooper and yes, he still felt the need to pretend upon his arrival—stating his wife is still in New York, to keep up the pretension.

Highly recommend to any reader intrigued with Scott Fitzgerald--regarded as one of the greatest American writers of the 20th century. Stewart O’Nan skillfully captures the tragedy, the details, mood and feelings of one man’s last attempt at fame in the final years of his life with grace, impeccable research, and engaging prose. Well Done!