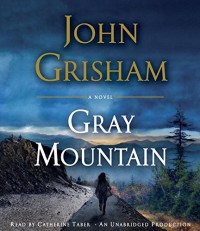 John Grisham’s GRAY MOUNTAIN, a suspenseful and powerful legal thriller of a young city girl, heading south; lands in rural Virginia, in the middle of Big Coal evil corruption, and a community left defenseless under their control.

Samantha Kofer (29 yr. old) loses her Wall Street job in commercial real estate law with a top firm, after the collapse, during the 2008 recession. Washington native, graduate of Georgetown and Columbia Law, she was a third-year associate at a huge New York law firm, working around the clock, making the big bucks; however, she finds herself unsatisfied, her lifestyle eating up her income, and no savings to tide her over for the next year.

In order to retain her status for a year at the firm, and maintain her health insurance, she needs to take on a year legal aid internship for a non-profit. She finds herself getting one reject after another, and just as she is about to give up, she accepts a position with Mountain Legal Aid Clinic in Brady, VA, population 2,200 in the middle of a poor Appalachian coal mining town.

Definitely a culture shock; however, she quickly finds there are some deep problems and a great need for legal assistance, in this community. Many lives have been destroyed by the coal mining business - every kind of cancer and contamination, and sickness you can list. However, no one seems to be able to win as they try and fight the Goliath giant.

Samantha is no stranger to the law business, as her father is still a high-profile consultant, having served time with playing on the fence—a fine line between good and evil. However, he knows the players and may be able to help pull together some financing of some of these cases which take a lot of money to prepare before the payout, that the smaller firms are not able to withstand.

Mattie, is her new boss at the legal aid clinic and has worked diligently for over 25 years to offer help to those who cannot afford legal assistance. Samantha is helping with her first case, and quickly moves on to a case of black lung problems.

No one seems to protect the interest of the miners, ones who have breathed in the chemicals and are entitled to disability payments. Of course, as most big corporate giants, they have the funds to tie up legal cases for years in court and the system; thereby delaying funds until they die or give up the fight, or wear them down, not having the funds to continue.

Of course, the doctors, prosecutors, judges, politicians, and regulators are all in the back pocket of these big players, furthermore making it difficult to fight for their rights.

One of the big cases involved two little boy which died in a trailer from the fault of the Big Coal, and there is much suspense as to holding out for more money for this family for a settlement, as they go up against the big boys, or go to trial (like playing the stock market with many risks).

Sam soon finds she has much to learn and is subjected to sensitive and confidential information. She now has to prepare a lawsuit and handle things she has never done, with high stakes, obstacles, and challenges which threaten lives. In the process she finds there are secrets, threats, and people who will kill in order to keep them buried.

Mattie’s nephew a good-looking young lawyer named Donovan, a one-man trailblazer; and driven attorney in pursuit of taking down Big Coal, for strip mining/mountaintop removal, which is cheaper and more cost efficient for them to remove the tops of mountains than to dig for it underground, which in turn does damage to the environment, streams, valleys and humans.

To further complicate, Donovan is also holding some secret documents, which have been stolen (brilliantly); which prove the mining company knew that chemicals it used in mountaintop removal have for a decade been polluting the wells of a small town nearby, giving it one of the highest cancer rates in America.

Samantha finds herself drawn to the fight, and to the people, as she gets personally involved with assisting the team in a legal capacity, as they fight for their rights against the powerful and evil Big Coal business. In the process, she learns more about herself, and finds her purpose in life, without the frills of the big city.

GRAY MOUNTAIN is much more than a legal thriller, as offers a human interest side and dynamics with the victims, the families, the community, the beauty of the area, the poverty, and the lives of the attorneys and families fighting to protect them.

Wow, was excited to get back to Grisham! I was an avid reader of Grisham before 2010 and read every book by this talented author (as one of my favorite genres) and enjoyed the movies; however, noticed have none of these books marked as “read” on Goodreads, as it was "pre-Goodreads' time; so I see I have a lot of reviews to catch up.

I enjoy this type of legal thriller; bringing down the big boys, with justice for the victims in a David versus Goliath story. I have recently read some great books regarding law and justice. Just Mercy by Bryan Stevenson 10/21/14 (non-fiction), a powerful true story about the potential for mercy to redeem us, and a clarion call to fix our broken system of justice—from one of the most brilliant and influential lawyers of our time.

GRAY MOUNTAIN is a captivating and engaging read; highly recommend. I listened to the audiobook and the performer,Catherine Taber was an excellent voice for Sam. Welcome back, John, you have been missed!