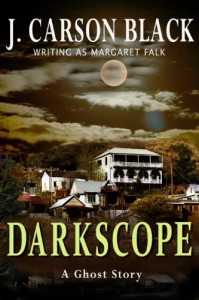 I am finally catching up with some long overdue reviews . . .

J. Carson Black’s, DARKSCOPE, is a delicious spellbinding ghost story with elements of mystery, murder, horror, suspense, and the supernatural; Old loves lost, new ones found, a ghost from the past, a walk through the town’s history, and intriguing evil secrets from the past.

For me, this book was quite an amazing tale, as written by one of my newfound favorite authors, set in one of my favorite unique historic old mining towns, very special to my heart, (the history, streets, buildings, and the people) of Bisbee, Arizona!

"Today, a haven to artists, retirees and history buffs, Bisbee astounds visitors with vibrantly colored rock faces and picturesque houses hugging the edges of cliffs. Its history can be discovered in its numerous museums, historic staircases and a mine tour that leads deep into one of the remaining caverns."

Black captures the essence and intrigue with this alluring tale, and if you haven’t been to Bisbee, you will want to travel there, after reading! Set in 1986, Artist and photographer and artist, and wealthy Chelsea McCord, twenty-six, is glad to escape—far away from her troubled drug addictive and famous artist and soon to be ex-husband (Jason) to the quaint mining town of Bisbee, AZ.

Her great uncle Bob, (has always played an important part in her life after her parents’ death), and has offered her the use of his rundown one story Victorian house, currently in the process of renovation, set a top of a hill, overlooking historic downtown. Little does she know what lies in this town.

Flashing back to the late 70s, more history—as Bob’s father was the magnate Lucas McCord, one of the founding fathers of the town in the early 20th century with plenty of enemies. (Lucas had two sons, one dead, the other his only heir, except for his great-granddaughter, Chelsea, carrying Johnny’s spark, as if it had skipped a generation). Three generations Johnny and Bob, his sons. Johnny’s son, Edward and Edward’s daughter Chelsea.

Nothing had turned out as Lucas had planned. His children and his grandchildren had all betrayed him (even with all his control). Too bad Chelsea was a girl or she could have taken over his legacy, he thinks. It was Johnny’s betrayal which strung Lucas the most. Johnny so full of promise, his one perfect creation, Johnny, dead at age twenty-six. How different things would have been if he had lived?

Chelsea is excited to set up house and while in the process of getting settled in, she discovers an old camera in a trunk with the film still inside. She decides to use it to photograph different areas of town; however, there is something mysterious about the camera and who is this woman Kathy, she continues seeing? What is Bob’s and the McCord’s part in the mystery?

She begins seeing the town as it was years ago in the 1920s, and she develops the film and sees the same people from another time. Is she losing her mind? She begins to see the street scene as if it was the 1880s.

Black cleverly connects the past and present, as Chelsea begins unraveling the secrets of her powerful family’s dark evil secrets, a supernatural force, and a psychopathic killer, as she fights to save herself and her uncle. She also meets someone new who could change her life. A spellbinding and chilling tale of lost souls, lost love, murder and deceit. Black brings the rustic old mining town of Bisbee, Arizona to life—with a beautiful ghost, who yearns for revenge and retribution.

I recently discovered J. Carson Black, after reading an ARC of her latest, HARD RETURN, a riveting suspense crime thriller (Cyril Landry #2) of mystery and intrigue, action packed, fast-paced, and full of danger. (5 stars). I was so intrigued with the character, Cyril Landry had to go back to read #1 THE SHOP. After further research, found Black resides in Tucson and was blown away when I found DARKSCOPE, set in Bisbee.

Could not wait to purchase and read this book, as felt I was back in Bisbee on the patio of the Cooper Queen Hotel (a fine example of poplar architecture from the turn of the century), the delicious coffee at the Cafe Cornucopia, and the vibrant streets, art galleries, with a town rich in history and character. It was so exciting to revisit past generations and ghosts, with the suspenseful page turner!

On a personal note: I immediately emailed the author of this connection, as previous worked with an owner/investor of Hacienda del Sol Guest Ranch Tucson, AZ to assist with their marketing efforts, and years later, the same owner retained me for a project in Bisbee.

The owners purchased two properties on Main Street in the middle of downtown Bisbee, AZ and traveled to the town, spending a great deal of time researching the history of the area with writing of the business and marketing plan for the new boutique bed and breakfast upstairs with retail space downstairs. I even had the privilege of choosing the name Letson Loft Hotel on Main http://www.letsonlofthotel.com/. These historic buildings are known as the "Letson Block" and estimated to have been constructed between 1883 and 1888. These are recognized as the oldest brick structures in the city and the only authentic Victorian buildings in Bisbee.

Today the Letson Loft Hotel on Main, (the building with the bay windows on Main Street) is the epitome of the most comfortable stay in Bisbee, with the same charm and romance of days gone by. The new owners have invested thoughtful renovations to the building, creating eight spacious and artfully decorated guest rooms with original 11' ceilings, private baths, restored hardwood floors, original skylights and exposed brick and adobe plastered walls. Their hope is that the Letson legacy continues through the loving care and renovation of this important landmark.

Am delighted to find a kindred spirit with a shared love of Tucson and Bisbee with the author! If you have not had a chance to visit Bisbee, I highly recommend a weekend trip to explore this charming historic town.

In addition, if you have not read J. Carlson Black, you are in for a real treat! I look forward to reading more from this talented author as she definitely can craft suspense, mysteries and thrillers, pulling you into the setting and each of the lives of her characters— you will not soon forget even after the book ends!