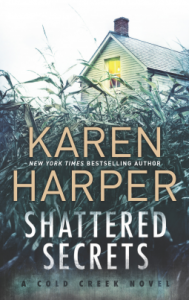 A special thank you to Harlequin MIRA and NetGalley for an ARC in exchange for an honest review.

Returning to the rural area of Cold Creek, Ohio, is an act of courage for Tess Lockwood (former Teresa). Abducted and held captive as a young girl and was held for eight months, she is unable to remember anything about the crime that destroyed her childhood and tore her family apart.

Now she is back, to settle her mom’s house she inherited and her goal is to sell it as quickly as possible, in order to purchase the Sunshine and Smiles Center for preschool kids in Jackson, Michigan where she has worked for years. She plans to live upstairs and redo the space downstairs, where she would teach and protect the young children.

She is not sure how people in this town would react to her as eighteen years have passed since she has been back. She is haunted by the cornfield, where she had run to hide when Gabe their teenage next door neighbor and the Sheriff’s son had told her to cut it out and called her a crazy tomboy. However this cornfield may prove to be a sanctuary instead of the site she feared all these year, and Gabe may be more than a friend.

Gabe is back as well after Iraq, and has taken over his parent’s house, the current county sheriff and hopes to shed new light on the cold case, especially given his growing feeling for Tess.

Tess isn’t ready to recall what happened to her, but when another child in the town goes missing, she’s certain it’s related to her abduction. Together, Tess and Gabe work to unlock their painful memories to save a child and heal their damaged souls.

The chilling Halloween timing, the rain, and the 20th anniversary of her kidnapping, combined with the new kidnappings—are they linked? From the nearby pet cemetery, the Hear Ye Commune compound, a scarecrow, taxidermy, a creepy town, veterinary, tombstones, a wand, Bright Star Monson, insane asylum, drugs, graveyard, books, librarian, a cult, and childhood traumas which trigger buried memories—abductions, a predator, and some crazy, weird, and wackos, and and the old saying “Spare the rod and spoil the child.”

A story of crime against innocent children, an average woman’s life impacted by crime and tragedy, who finds the strength and courage to solve the crime with a little help from the hunky police. All add up to a suspenseful and engaging tale with a twist of contemporary romance.

This was my first book by Harper and look forward to the other books in this gripping trilogy!