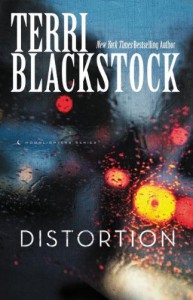 DISTORTION was my first book by Terri Blackstock, and definitely look forward to reading more from this talented author; a mixture of a suspense thriller, with a seamless blending of Christian faith elements.

I have not read the first book in the Moonlighters series, Truth Stained Lies; however, have it on my “to read list”. I would recommend reading this one first, prior to Distortion, in order to learn more of the background of the characters, and this interesting family.

With a thriller opening, Juliet Cole’s husband, Bob is gunned down in a storage U-Haul parking lot, Juliet and Bob are helping her sister Holly move. What comes afterward is just as shocking. She has no clue this could have been a planned murder, and not just a random shooting.

At home later, this is confirmed when she hears a voice mail which lets her know, this was a deliberate attack, and now the only thing on her mind is protecting her family, in particular her two sons—they are in danger.

Juliet is supposed to be the stable sister in the family with her well known successful physician husband. Little does she know Bob has a secret life full of lies and deception? Did she miss the clues? How could this man be involved in crimes, drugs, and another woman and child? Has her life been a lie? How will she explain this to her sons?

She teams up with her sister and PI Michael Hogan to dig into the lies and life Bob has been living outside of the one she knew. She is driven to find answers; front and center in the investigation. The more she learns, the worse it gets. A drug trafficking history, a fortune in cash, and a secret family all begin to question Juliet’s life and her faith – everything in her life is threatened.

As more deception and clues surface, she is busy with her own PI work with her sister Holly, tracking down anything which will lead them to the killer and solve this mystery. Despite her problems, she remains faithful to God and holds on to her faith through prayer.

I discovered (did not know this previously), In 1994 Terri was writing for publishers such as HarperCollins, Harlequin, Dell and Silhouette, when a spiritual awakening drew her into the Christian market. As she was praying about her transition, she went on a cruise and noticed that almost everyone on the boat (herself included) had a John Grisham novel. It occurred to her that some of Grisham's readers were Christians, and that if she wrote a fast-paced thriller with an added faith element, she might just find her niche.

As God would have it, Christian publishers were showing interest in the suspense genre, so she quickly sold a four-book series to Zondervan. Since that time, she's written over thirty Christian titles, most of them suspense novels. What an inspirational journey. Incredible, what a way to reach a broad audience with a top credible Christian publisher as Zondervan, combined with a strong author!

In the first book, Jay, the brother of Cathy, a former lawyer and now investigative blogger, is falsely accused of murdering his ex-wife, she and her two sisters, Holly and Juliet, team up help their brother and to protect Jackson, their five-year-old nephew. In this novel Holly and Juliet team up to help Juliet find Bob’s killer.

I like the fact of using flawed characters, sins and temptation, as Christians are not perfect. Sometimes God uses puts us in situations to stretch our faith and have us grow in His wisdom.

A special thank you to Zondervan Fiction and NetGalley for an ARC in exchange for an honest review.