The End of Always 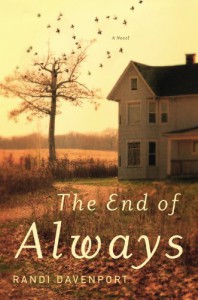 A deep and thought-provoking novel, THE END OF ALWAYS is about one young, sad, yet brave and courageous woman’s struggle to change her life, and break the cycle of family violence of men against women.

Randi Davenport is a talented writer, and gets into the mind of seventeen- year- old Marie, the main character, set in 1907 in the rural area of Wisconsin.

There are many common threads when comparing 1907 to 2014, as violence still exists today in many families, with unhealthy learned behavior, continuing the vicious cycle. Sadly, may still apply behind the closed doors of many households today.

Like Marie’s family—her dad was a very violent man, with cruel punishments, for the three daughters, even killing her mom. She vows she will never marry a violent man, as did her mother and her grandmother. She is continually haunted by the memory of her mother and longs for a better life, a more independent one without the abuse.

However, her older sister (she was so frustrating), feels the woman has to cater to the man, and ensure he does not get mad, doing whatever they want to make peace, as part of a duty as a wife, daughter, or mother.

The punishments and abuse were horrific, and at times the audiobook was difficult to listen to, even though the narrator did an outstanding job depicting the moods and emotions of each character.

Marie meets a charismatic young man, August, and is blown away by his affections, thinking this is her way out of her bad home situation. She falls in love very fast, and disregards the signs. She is convinced he's a kind, gentle man who will never harm her.

After they eventually marry, Marie notices signs that August might not be perfect after all, but she does what other women have done for years—ignores her instincts and then hides evidence of abuse from prying eyes. Like others before her, she's too ashamed to reach out for help. But before she ends up like her mother, strangers and a relative step in, and with their backing Marie decides she can no longer be a victim.

When she jumps out of one fire into another, a controlling and abusive man, who makes her quit her job and gives her no money for food. When she tries to get money for food from her sister (money she gave her sister), he beats her. Marie falls under August’s spell so easily.

Marie changes drastically during second half of the novel, fighting for herself. Finally, this courageous young woman gets help from other nearby neighbors, and goes up against a man’s world with an attorney, to save herself and her future, with court battles which will try and tear down her self- esteem--the actions of officials all catering to the man. Which is worse, a husband or a father?

This incredible journey to self-discovery and triumph was inspired by real events in the author’s family history as Davenport begins reading her great-grandmother’s court records, who also worked in a laundry. The author began thinking what it was like, and her great-grandmother’s dreams. As she began researching the family and the time period, she discovered the history of violence in the family. This related to the inspiration for the book as part of the American experience.

A powerful story of a woman’s desperation and brave efforts to escape a brutal heritage, to end the family violence and help set a precedent for other woman in the future. An intense statement to the power of determination and hope---a gripping reminder of our nation's long love affair with violence.

This story will ring true ---women from generations past, prior to women’s rights, and some even today. We take for granted our rights in today’s American society; however, there are many women who suffered severely in past generations, even our own mothers, grandmothers, or great-grandmothers. As the novel reiterates, some die at the hands of a man’s violence and abuse, with no remorse.

THE END OF ALWAYS is a reminder of other addictive diseases, such as alcoholism, violence, drugs, or a specific unhealthy environment—devastating the lives of those in the household, their self-esteem, destroying  their lives and future. These victims most of the time want to escape this abuse and addiction, unless they are brainwashed into thinking they are the cause, or a curse.

These victims swear they will never find themselves in this same situation. Yet, most of the time, they are the ones who live to repeat more of the same, choosing a spouse, or friend, exactly like the mother or father, and repeating the vicious cycle, carrying on to the next generation. If they do break away, will they be strong enough not to be pulled back in?

This insightful novel explores the intense emotions involved with women at the hands of men, before women’s rights. They learn to live with it, subjected to cruel abuse, walking on eggshells, at the mercy of the man’s mood. Most do not have the guts, or means to try and leave. Most men did not allow their wives to work, so they had no financial support to break free. Some are addicted to this personality, thinking they will change or they need to change their behavior.

There are German myths and stories sewn into the narrative of THE END OF ALWAYS. I believe sometimes fairy tales and fables can cause certain false expectations in a realistic world, or the person looks to one person to change their future, versus trying to change their own fate themselves.

Rather than witnessing violence in THE END OF ALWAYS, we often see evidence of it on the bodies of women in the novel, including Marie and her mother. I feel Davenport focused more of the aftermath rather than the actual abuse, to offer readers more insight into the actual feelings, the emotions each character experienced at the time, their thought process, as well as options or course of action. You get a real insight into the character.

There are women’s support groups out there today, and as in the novel, Marie finds comfort and support with other stronger women and men as friends. You want to shake some sense into these girls and women and say, just LEAVE; however, this is the era, with lack of education and resources... The government, officials, employers – virtually, no laws to protect, and no one respected women, nor cared about their opinions.

I would encourage readers to visit the author’s website, to learn more about her books, background, history, violence, as well as some informative points for book clubs and an excellent reading group guide.

A deep and moving story with rich characters, this book will appeal to those drawn to strong female characters, as well as readers of literary and American historical fiction. Looking forward to reading more from this new found author!