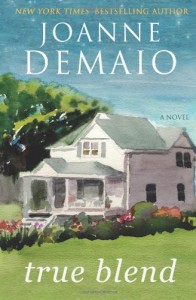 Joanne DeMaio, is at the top of her game with “True Blend”! Having read all her books (which I highly recommend, as enjoyed them all), “True Blend”, is much more than a sweet, romance, feel -good book in an idyllic setting, to curl up with.

True Blend is indeed an unexpected love story set in a fictional town of Addison, Connecticut (great front cover) to draw you in; However, more importantly a suspenseful, thrilling, compelling page-turner, keeping you on the edge of your seat, full of emotions, choices, and intensity, as DeMaio, so brilliantly creates the background of her characters, the setup, interjects raw emotions, feelings, and careful plot planning of this thought provoking novel. (making you read well into the night, to see what is coming next).

There is so much to this book, from the dynamic sensitive relationship with George/Nate/Father. You feel as though you know the characters and are stepping into the pages of their hearts and lives.

The references to a card game (Nate/George) as it parallels to their life. Nate’s risk taking, raising the stakes, house of cards, playing a hand, showing your hand, keeping the cards close to the belt; guilt, and a disastrous and meditated plan he has developed for his brother George, allowing nothing to stand in his way.

George, a man who sacrificed his dreams of professional baseball for his family, who kept his father’s butcher shop (The Main Course) running, the business man, the stable one-who lives alone and never married. He plays it safe until he is thrown into an uncontrollable circumstance of choosing between his brother and the safety of a beautiful young woman and her daughter, with only seconds to decide.

The one point, Nate had not planned on when concocting this heist, was George falling in love with the victims they hold hostage - Amy and her daughter Grace. As fate would have it, Amy, a recent widow leading a quiet life in her beautiful farmhouse, with her almost three year old daughter Grace, owner of a vintage bridal shop happens to be at the bank (wrong place and wrong time), which will forever chance her life.
George also happens to be in the car with Nate on his way to the casino when he was thrown into a scene, which would change the course of his life, with only seconds to decide which path to choose and the consequences. When these two worlds collide, what course will it take and is there ever a perfect crime?

Amy’s quite peaceful life turns into a daily nightmare with threats, stalking, flashbacks, anxiety, fear and PTSD for this young mother and her daughter, who cannot speak after the kidnapping. Will her life ever be the same? Can she remember each detail of the man who took her daughter? One second changed her life, her daughter, as well as George’s future.

For those fans of Whole Latte Life, you will enjoy the mentions of quaint coffee house. A beautiful summer of two people joined together by tragedy, nature and force. Can their love survive, as they learn to trust one another where secrets are unveiled in this small town New England setting, for a true blending of souls and lives? I highly recommend!

On a personal note, this story is very realistic, as a similar situation occurred about five years ago involving my cousin in Florida. He was the stable brother, a successful engineer, who purchased a new convenience store business, as an investment for his retirement. His parents, now retired, are very well to do educated professionals living on an island.

The step brother (not so stable and more of a risk taker), from a mother’s previous marriage, marries a woman from an online dating website, with a hidden past (which no one knew about, including the husband). The step brother talked him into allowing his wife to manage the store.

Over the course of the next six months, the sister in law developed a lottery scam, taking thousands, committing fraud, including numerous credit cards in her brother in law’s name, with elaborate spending sprees to max out the cards. Totally ruined the successful brother’s business and his name--a nightmare for him and the parents for years to come.

When the FBI and authorities became involved, the stable brother had to file charges against the sister in law and step brother as an accessory. With a sad ending, the step brother committed suicide in his garage on his motorcycle, as he could not choose between his brother, and the wife he loved.

Come to find out she had a long list of past similar crimes, and is still serving time in prison today. The brother will have to live with the choice of allowing her to run his business, which now has been sold, along with my aunt and uncle, still wondering what they could have done different, or missed the signs of his despair.

The words “what if”, are two powerful words which can change many lives and "do overs" are are coveted by many who have found themselves in these comprising situations.