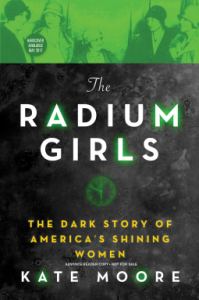 The incredible true story of the young women exposed to the “wonder” substance of radium and their brave struggle for justice...

Impeccably researched, Kate Moore showcases this incredible piece of history, THE RADIUM GIRLS: The Dark Story of America's Shining Women – Filled with triumph and tragedy, the inside personal story showcasing real women standing up for their rights with strength, dignity, and courage.

Top Books of 2017! An incredible book. The Radium Girls would be proud. They were called the shining girls because they quite literally glowed in the dark. And they were dying.

Kate Moore, best-selling author, editor and ghostwriter from London made it her quest to give these women a voice, with inspiration starting from a play. She became passionate about these women and knew she had to write about them.
The Radium Girls were female factory workers who contracted radiation poisoning from painting watch dials with glow-in-the-dark paint at the United States Radium factory in Orange, New Jersey, around 1917.

The women, who had been told the paint was harmless, ingested deadly amounts of radium by licking their paintbrushes to give them a fine point; some also painted their fingernails and teeth with the glowing substance.

“An amazing story about real women who stood up and fought for justice. Their strength, sacrifice, and courage deserve to be remembered. Part scientific mystery, part horror story and part courtroom drama, this is a piece of history that will break your heart but somehow lift your spirit.”

Moore goes beyond the scientific and legal aspects and centers on the women’s compelling story of their individual lives. They are center stage, told from their perspective. The individual women who had fought and died for justice. Historical achievements.

The author tells the story of these women, ready to express their independence from their initial excitement about the work to their realization that it was killing them to their legal battles and ultimate death.

In addition to the sickness, death, and injustice after injustice, the author shows the women’s intense strength and courage fighting until the bitter end. The slander, fighting the corporate giants, from doctors, lawyers, and the corruption. They never gave up hope. For some it was too late; however, they wanted to fight for justice for their families and others.

These were ordinary working-class women who had dreams and hopes. They were known as “The Radium Girls”. They each had their own unique experiences. Their own lives, loves, families, and losses. Their triumphs and terrors.

The author takes readers on a journey. What makes it so special and moving is the efforts put into this book, by flying 4,000 miles across an ocean to walk in the radium girls’ footsteps in America. She walked the routes to work, visited homes and graveyards.

From extensive research, diaries, letters, photos, personal accounts. She delved deeper and became their champion. Standing on the site of Radium Dial, and interviewing their relatives, research, legal and medical reports, plus more in order to find out what the heroines were really like. What the girls endured. Their sacrifices.

Moore brings their story to life!

Love the way everything is organized with contents, a list of key characters, doctors, investigators, dial-painters, The Radium Dial Company, and doctors. In addition, photos of the women, and the watches among other references.

The women were told there was nothing hazardous to their health. A frequent line we hear today about our foods. Just a little will not hurt. The amount of radium in the paint was considered so small that such measures were not deemed necessary.

Grace and Irene. Mollie and Ella. Albina and Edna. Hazel, Katherine, and Mae. They picked up their brushes and they twirled them over and over, just as they had been taught. Lip . . . Dip . . . Paint.

"The Radium Girls live on shining through the darkness of history to blaze a light for good, for strength, and for courage.”


Dial painters were motivated by the idea of helping the troops. They were doing their bit to help. Some even scratched their name and address into the watch as a message for the soldier who would wear it and often would respond with a note. Soldiers needed watches, and people needed it for the planes and the trucks, so these girls were employed to paint the dials.

The health problems came later. From an aching limb, or a bad tooth ... but as the sickness developed and set in with the women, it got a lot more gruesome. From jawbones, bleeding, tumors, decaying bones, infections, anemia, and cancer. – the radium was killing them. There were expensive medical bills, care, and an employer not accepting responsibility.

They had no clue at the time, they would make history. They would change workers' rights. Five girls fighting for justice: Grace, Katherine, Quinta, Albina, and Edna.

The Radium Girls is a bittersweet, cautionary tale. A reminder that our society is as fragile today as they were hundreds of years ago. A race-against-time fight for justice that would forever change US labor laws.

In light of the food industry today, plus many more areas of our life including our environment. With chemicals, toxins, additives and preservatives. When the food industry says it is ok. When those who rely on the assurance of others and do not question their reliability and credibility. The corruption can be deadly.

As in the tobacco industry, baby powder cancer lawsuits, financial, and numerous others, it may be years before the actual horrors are known, and unfortunately, deaths and sickness before greedy giants are taken down and justice is served.

A deeply moving story of women whose lives were cruelly cut short by people who placed greed and profit above human life. These women became a glowing beacon of hope for justice, equality, and accountability.

What makes this story so unique versus others: It is told through the eyes of the radium-dial workers, their families, and friends – their personal journey. By doing so, it gives the reader a better understanding of the girls’ lives, explored from a more personal level. The radium girls’ case was one of the first in which an employer was made responsible for the health of the company’s employees. Today, we benefit from their courage and tenacity.

“Part scientific mystery, part horror story and part courtroom drama, this is a piece of history that will break your heart but somehow lift your spirit,” Moore said in her New York Times interview. Tell Us 5 Things About Your Book: Kate Moore’s ‘The Radium Girls’ New York Times Interview

“Not much unlike the modern American war against science being waged by our government and big business, the radium companies of the 20th century ignored the facts and hid the truth, resulting in deadly consequences. . . But also not unlike modern America, there were some people willing to stand up for what was right: the Radium Girls.” – Bustle

Emotional, rich in history and character, a must-read book! Strong women which are not forgotten. In addition to the advanced reading copy, also purchased the audiobook performed by Angela Brazil. Highly recommend.

A special thank you to Sourcebooks Landmark and NetGalley for an early reading copy. 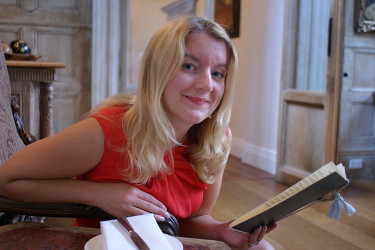 About the Author
I am the author of more than ten books across the genres of gift, humour, biography, history and children’s brand publishing. A Sunday Times top-three bestselling author, I am extremely versatile, equally adept at creating projects to clients’ briefs, ghostwriting memoirs and innovating my own ideas.