Chevy Stevens returns following Those Girls (2015), with yet another top notch Sleeping with the Enemy psychological domestic suspense thriller on steroids!

A long-time Stevens fan, reading every book she creatively crafts, and anxiously awaiting the next — Stevens once again showcases her highly creative plotting skills, an engrossing narrative, and her "signature ingredient" of keeping readers surprised, with her famous twists, while moving seamlessly between timelines.

Starting in November 2005, we meet Lindsey, married to Andrew and daughter Sophie. She knows one thing: She had to leave her husband. There was no more time. No matter what it took, no matter how risky it was, she had to get Sophie away from him. She needed to protect her daughter. She is terrified.

As with all domestic abusers, they remove all their victim's friends and financial resources, to keep them under their thumb.

Flash forward to 2016. Lindsey and Sophie are now living in Dogwood Bay. She has started a new life. She hopes the past is in the past. Or is it? Andrew has spent time in prison. He wants her to suffer. He was going to make her pay for every year he spent behind bars. He was now a free man and he was going to find her.

Is someone watching? Is Andrew back to act out his revenge?

Stevens flashes back and forth from between these two timelines and even further back to 1997 when the couple met. We hear from Lindsey and Sophie’s POV. The master manipulator. Is there more than one? Who can be trusted?

When she left him years ago, after drugging him, to enable their escape—there was a car accident. A young woman was dead. Someone had to pay.

From Sleeping with the Enemy, The Perfect Guy, Fatal Attraction and more, we always love the intensity of unfortunate protagonists finding themselves stuck with Mr, Crazy. Intense. The man masked behind the chilling monster inside. Unfortunately, not until too late, does he reveal his true self. Then the victim finds themselves risking their lives and others to escape.

As always, a master storyteller, Stevens adds her own clever twist. There is nothing ordinary or similar to this tale. A cautionary tale screaming “Do not trust anyone.” When you least expect someone, crosses your path. When you are most vulnerable, most trusting. They may seek you out for their own revenge.

Stevens delivers her most riveting grip-lit yet. The brutality of domestic violence. Frighteningly real, and all too familiar for many. In addition, it is among the hardest to witness, as for why many are free to continue on their destructive path, until it is often, too late.

The author knows how to build suspense, and keep readers on the edge of their seat From the darkest obsessions, the entrapment, control, and evil.

By adding Sophie’s POV, she reaches outside the couple to hear the fear of a child, a sense of loyalty, the consequences, and strong pull between the troubled parent's abusive relationship.

If you enjoy the TV series, Big Little Lies —you will be thinking of Celeste (Nichole Kidman) and Perry Wright (Alexander Skarsgård). This guy totally gives me the creeps. He reminds me of my ex-husband. Rich, powerful, and crazy.

Highly recommend. For all my Chevy Stevens' GR Book Reviews. Trust me, you will want to read this one. Mark out the time. Unputdownable. 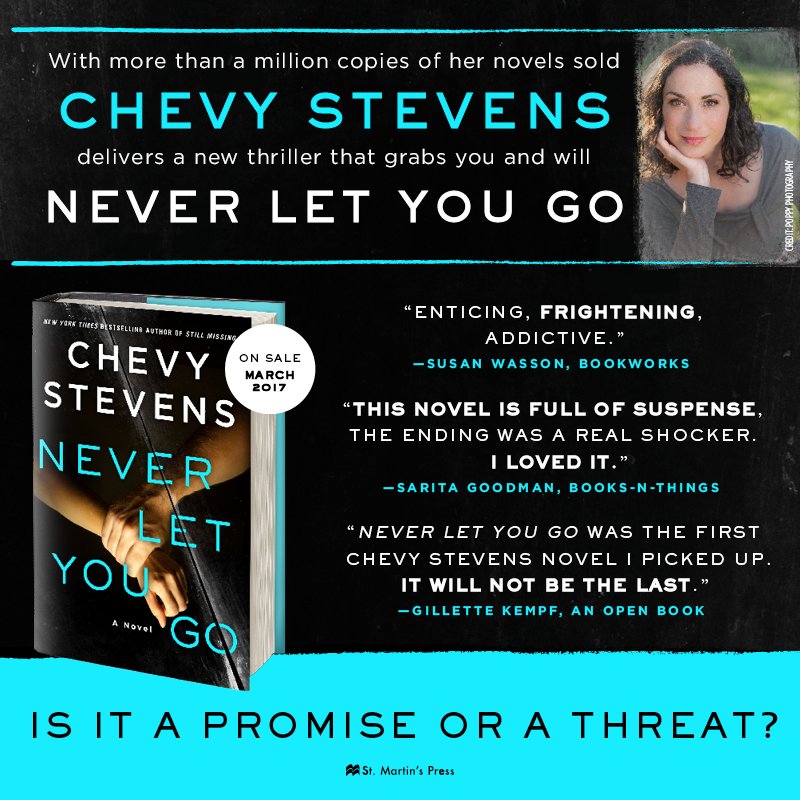