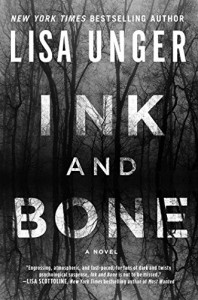 By: Lisa Unger
The Hollows
ISBN: 1501101641
Publisher: Touchstone
Publication Date: 6/7/2016
Format: Other
My Rating: 4 Stars
A special thank you to Touchstone and NetGalley for an ARC in exchange for an honest review.

Lisa Unger returns following The Whispering Hollows, where we received a recap of the haunting Hollows Series and a tantalizing preview of her latest INK AND BONE, a dark psychological suspense, with a chilling supernatural, horror, and Gothic twist.

Finley Montgomery (Eloise’s granddaughter), twenty-years old, (with her tattoos and motorcycle) is center stage in Ink and Bone. Picking up from the last installment, she is moving to The Hollows, New York and lands in the middle of a dangerous investigation involving a young girl who has been missing for ten months, and the police have all but given up hope.

There were 9,780 living souls populating The Hollows. There were good people and bad ones, people with secrets and dark appetites, happy people, and people buckling under the weight of grief and sorrow. There were people who were looking for things --and loved ones they had lost--people hiding.

Lost people trying to find their way home. Each of them connected to the others in ways that were obvious, or as hidden as the abandoned mine tunnels beneath the ground. Each had his purpose and his place in The Hollows.

Finley’s ex-boyfriend, Rainer from Seattle had followed her, now tending bar at Jake’s Pub, a cop hangout. She does not need the distraction. However, he keeps showing up.

Merri Gleason, Abbey’s mother has been hooked on pills, an unfaithful husband, Wolf (narcissistic-what a jerk), an OCD son, Jackson, and a daughter, Abbey – still missing. A bad marriage. After a weekend mountain lake house getaway trip to the Hollows—her life turned into a nightmare. The enormous unthinkable tragedy that ultimately blew them to smithereens.

After ten months she has to try everything to find her daughter. They had spent money, had news conferences, searches, volunteers, fliers, and manhunts. All had ceased and weathered away. Everyone had given up. She still blamed herself. Her husband, the Ivy League travel writer, adventurer—educated man of the world (and skirt chaser) had taken the kids on a hiking trip to give her time by herself. The shooting of father and son, and her daughter was taken. Merri was living in fear and guilt—the world had become such a crowded frenetic, and terribly lonely place.

She has turned to Jones Cooper PI (retired Hollows PD) and psychic Eloise Montgomery for help. She is desperate for answers. However, Eloise is not getting anything and turns it over to her granddaughter, Finley to work with Cooper.

Eloise and Jones had worked many cases with good success, their talents balancing and complementing each other. They had good energy. Merri has checked into Miss Lovely’s Bed and Breakfast in The Hollows, a charming little guesthouse, where she felt safe, while she was determined to find her daughter.

Finley and Eloise were Listeners, people who heard (saw, and experienced) what other people couldn’t. Someone like Jones was a Sensitive—whether he knew it or not—someone with sharp instincts with the ability to see right through the layers of person straight into the truth.

There are similarities between two cases –The Gleasons and Fitzpatricks. Both families had come from Manhattan. Eliza age nine and a boy Joshua age fourteen. The Gleasons had hired other detectives and now a lot was riding on the case—Finley was feeling the pressure pushing down. She did not disappear into visions like Eloise did, or actually communicate with the dead like Agatha Cross. She sort of did both, but sometimes there wasn’t a lot of cohesion to what she experienced. Lines were blurred—visions or reality. What did the dead want? The lost were getting restless and angry.

The truth was Finley wasn’t sure how she planned to use her gifts (Eloise was a slave to the gifts), and she was not sure she wanted this. Eloise had told her she was chosen. She was unsure she was ready.

“Life is an impossible twist of choice and circumstance, one rarely exists without the other.”

The Whispers were usually quiet; however, at times they could be loud. A million voices telling their stories, the full rainbow of human experience—birth and death, joy and grief, fear and love.

A New York real estate developer visitor gets murdered, (wrong place-wrong time) people living off the grid- the townies call them “hill” people. They felt the Hollows belonged to them. Folks who lived off the land. Masking themselves as normal people, coming into town. What monsters are hidden in the Hollows Woods? The underground minds? Hidden rooms. The pain givers, and the misery makers. Why are they taking and torturing innocent people?

How could Abbey, and those other two children, this man, just disappear and not be found? Swallowing up innocent lives.

The negative energy of The Hollows could not be denied. Missing persons, miscarriages, accidents, and unexplained events. Brutal murders, witch burnings, and horrible mining accidents. It was not always positive or negative, but always demands something of people like Finley. A place where people moved their families to get away from crime and the chaos of the big city, vacationing here for its natural beauty.

We hear from Abbey, Penny, and the evil monsters connected, in the deep woods, hiding their evil secrets. Flashing back and forth from Eloise, Finley, Jones, and characters and spirits from previous books --a race against time to find the monsters, who collect Dreamers, before they kill again. There are those trapped, and someone is holding them back so they cannot pass. Will they be heard? If you look hard enough at the facts, you will find the trail of evidence that leads you to the truth, no matter how ugly. People always thought the dead haunted the living, but sometimes it was the other way around.

“Someone at peace has to show them the way out. Once negativity has been released, it won’t attract anymore.”

Taking the haunted characters of previous books, The Three Sisters, the victims of hatred and jealousy, The Burning Girland her sister abused by their stepfather then murdered by their own mother, and Elsie another little girl drowned by her mother. The lost ones.

Finley was buried under the weight of the terrible sadness—each horrible moment of abuse, neglect, and murder which flashed before her eyes—the horror. The lost girls. The brokenness. The screaming.

Recommend reading The Whispers #1 to learn about the background of Eloise and Finley. Loved Fatboy and Priss in Crazy Love You.

Unger definitely crosses to the dark side with Ink and Bone,with more supernatural crazies than I particularly care for (Not a fan of paranormal or horror); however, she is a superb storyteller. Definitely dark and disturbing—so if you are looking for a feel good book, you need to look elsewhere. For me, some of the paranormal, horror, Gothic, and ghoulish took away from the overall suspense thriller side, I prefer.

Since I have read all the books and novellas in the series, was curious to see how things would end up with Eloise, Finley and the missing girl. Unger leaves the ending open to another installment which fans will look forward to. Not the ending I was hoping for.

Was intrigued how she ventured into this dark subject material. Read further" Tess Gerritsen and Lisa Unger in Conversation. Deep stuff! A wild imagination. Also read Gerritsen's Playing with Fire. Both, anything BUT ordinary.